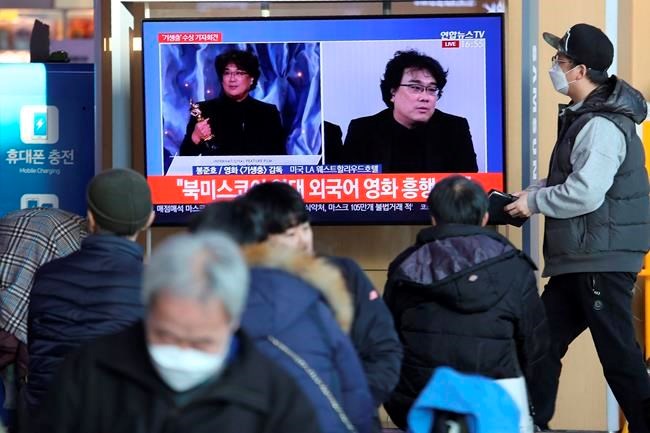 SEOUL, Korea, Republic Of — South Koreans are reveling in writer-director Bong Joon Ho’s dark comic thriller, “Parasite,” which won four Oscars, including best film and best international feature, at this year’s Academy Awards. The movie itself, however, doesn’t put the country in a particularly positive light.

No doubt, the international acclaim for “Parasite,” which also won the prestigious Palme d’Or at the Cannes Film Festival last May, highlights South Korea’s emergence as a global cultural power, a reflection of decades of focus on building world-class industries in one of the most vibrant democracies in Asia.

But it also hints at an uncomfortable truth: While the national successes have been spectacular — from Samsung's rise as a global economic powerhouse to the explosion of K-pop in Asia and beyond — many South Koreans recognize that there's been a dark side to that rise. Only a few years ago, Bong himself was blacklisted by the government, and the characters in his film reflect a society where many feel intense hopelessness.

South Korea's rapid emergence from the devastation of the 1950-53 Korean War also saw a bloody transition from dictatorship to democracy. Its association with neat smartphones and cars came amid a constant threat from nuclear North Korea. For every international success, there's also widespread worry that South Korea will forever be overshadowed by regional giants Russia, China and Japan.

But “Parasite”’s main characters portray South Koreans who have been left behind by the country’s dramatic changes. It's a biting commentary on deepening inequality and other problems that have many young and poor people describing their lives as a hellish nightmare.

RELATED: Upstairs/downstairs: the microcosmic class conflict of Parasite, a review

South Korea has one of the largest gaps between rich and poor among developed nations and is struggling mightily to deal with decaying job markets, rocketing house prices and a record-low birth rate as couples put off having babies while struggling with low pay and harsh work conditions.

Although fully Korean in language, and tone, Bong’s dark tale of poverty and class struggle resonates across borders because Western democracies are also experiencing similar social and economic problems, albeit not as “extreme” as in South Korea, according to Chin Jung-kwon, a prominent cultural critic.

“The film shows that South Korea still has a strong message to show the world,” Chin said.

While Bong is uniquely talented as a director, it was only a matter of time before South Korean movies and other pop cultural products gained increasing acceptance in the West, considering South Korea's dynamic cultural scene, which has matured along with its democracy, Chin says.

K-pop has garnered a huge international following with an increasing number of fans coming from the United States.

With “Map of the Soul: Persona,” BTS last year became the first musicians since the Beatles to debut three consecutive albums atop the Billboard Album chart in a span of less than a year. South Korean TV dramas, which triggered the original “Korean Wave” in the early 2000s, continue to be big in Asia and other regions like the Middle East.

Perhaps more than any other genre, South Korean films have aggressively tested artistic boundaries, often with stunning visuals and violence meant to expose the underside of the country’s economic success story.

This sometimes creates political consequences for the artists.

Bong was one of thousands of artists who were blacklisted and denied government funds under the rule of conservative former President Park Geun-hye for their allegedly critical views of her administration. Following protests by millions, Park was ousted from office in March 2017 and is now serving a decades-long prison term for corruption.

Not everyone was happy about how Bong portrayed the characters in “Parasite,” which tells the story of how an unemployed family of four living in a slum basement apartment comically con their way into the lives one of Seoul’s wealthiest families before things begin to unravel darkly.

Critic Kim Gyu-hang accused Bong of objectifying poor people and treating their lives like a “sightseeing attraction,” saying that the film makes no real attempt at explaining how the system locked the characters in a desperately hopeless situation.

“("Parasite") provides no deep insight into humans, their anger and how they are a byproduct of the social system that surrounds them,” Kim said.

“Parasite”’s Oscars success follows years of struggles by South Korean directors to break through in Hollywood. Park Chan-wook, who won the Grand Prix at the 2004 Cannes Film Festival with his thriller "Oldboy," received mixed reviews for his 2013 work “Stoker,” an English-language thriller starring Nicole Kidman. Bong enjoyed both commercial and critical success with his 2013 sci-fi film “Snowpiercer,” which starred Chris Evans and Tilda Swinton along with “Parasite” actor Song Kang-ho.

But nothing that's come before has been remotely as successful as this South Korean film shot in the Korean language.

“Every society in the world experiences conflicts created by people’s efforts to move up the class ladder, and South Korean films have dealt with this issue for a long time,” said veteran filmmaker Lee Jang-ho. “Maybe Bong's dark and his vivid description of the lives of the South Korean poor, including their ‘half-basement’ living spaces, felt refreshing to American moviegoers."