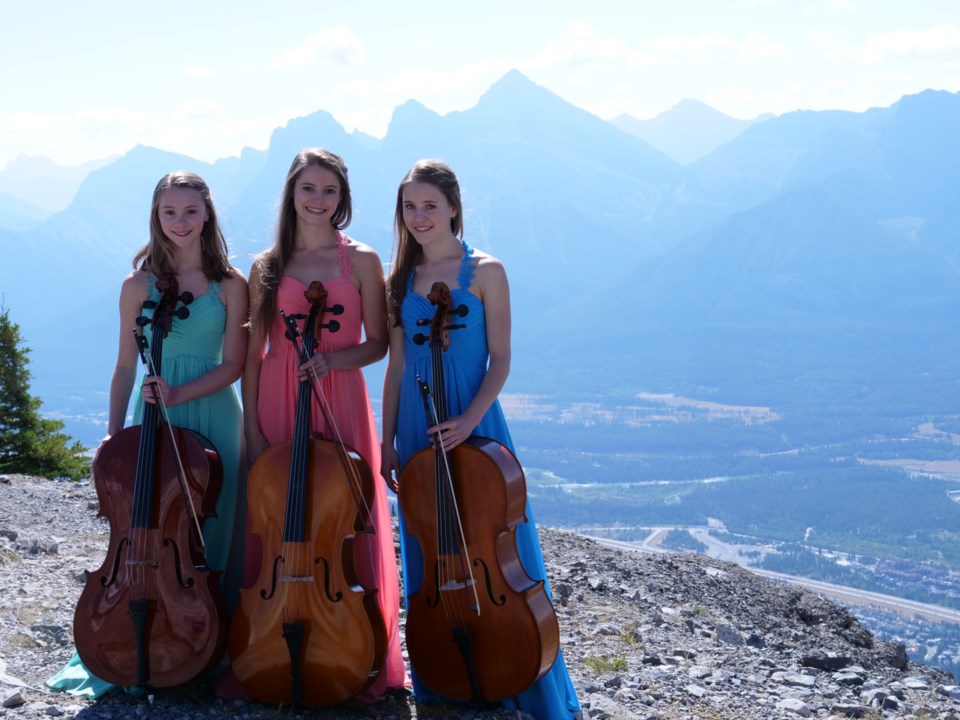 They live in different cities and towns, but on Saturday, Nov. 23, Three Sisters Cello Trio merges its musical talent at a concert in St. Albert.

Originally from South Africa, the Coetzee family immigrated to Canada when Mari was four years old and Ine a mere 18 months.

“My father is a family doctor and my mom’s brother opened a practice in Brooks. A position was available and we came. My parents were concerned about our safety and they wanted a better life for their children,” said Mari Coetzee.

Each sister discovered her respective love of cello at an early age within the musically gifted Calgary family. The trio’s mother held a lifelong dream to play the cello. Unable to pursue the dream in South Africa, she signed up for music lessons in Canada.

“I was five when she started. I saw mom playing the cello. I loved the sound and I asked to play it. Gradually, one by one, we started,” Mari said.

Many within the musical community have labeled the siblings child prodigies.

“But there are many ways to define that label. I think time and effort is more important than talent. If you like something at a young age and work at it, you are more likely to succeed.”

Mari, Ine and Luka, each in their own fashion, love the cello’s resonant string voice often described as most closely corresponding to the human range. Unlike the violin’s high-pitched keening voice, the cello bathes its sound in a deep, sonorous elegance.

After many years of playing together and apart the sisters drove to Canmore’s Three Sisters mountain peaks and recorded their first breakout video, Journey of Remembrance.

It included David Popper’s subtle yet majestic Requiem for Three Cellos, released in 2017. But it was 2014 that was a momentous year for the sisters.

“That year, we lost three grandparents. We returned to South Africa and did a concert. When we ended the concert, we played the Requiem and dedicated it to our grandparents. Our mission is faith, hope and love and we realized we wouldn’t be where we are without the sacrifices people made to invest in us.”

As part of the Saturday concert, the trio once again plays the Requiem accompanied by pianist Patricia Tao. In addition, the program features a range of short cello repertoire from Vivaldi, Bach and Beethoven to Elgar, Dvorák and Andronikou.