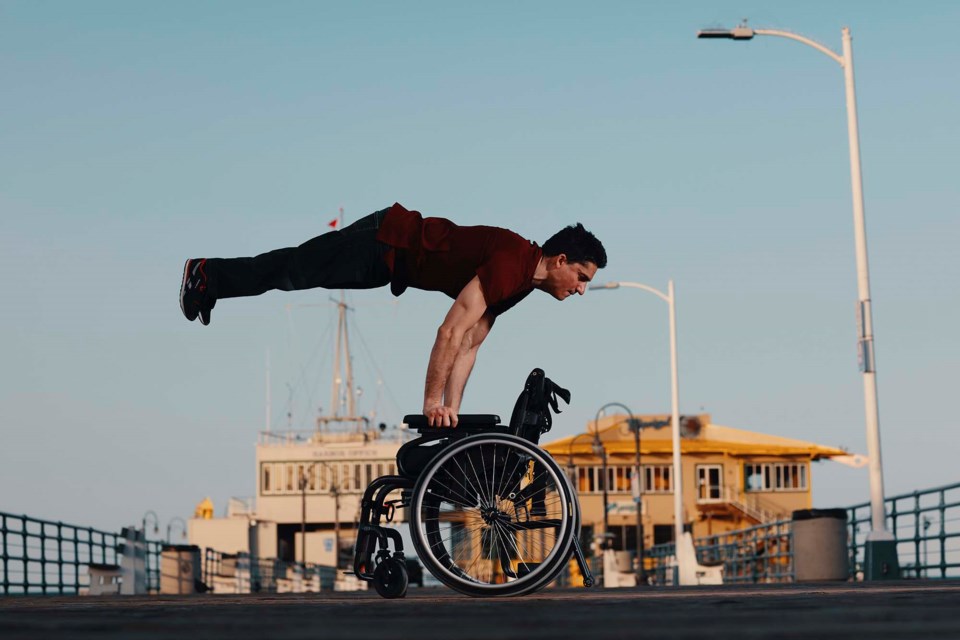 Luca "Lazylegz" Patuelli, a performer at the International Festival of the Arts on June 5 and 6, is seen dancing at Santa Monica Pier.SUPPLIED/Photo

Luca “Lazylegz” Patuelli is shining light at the online International Children's Festival of the Arts.

The Montreal-based hip-hop dancer was born with arthrogyprosis, a neuromuscular disorder causing joint stiffness that forces him to walk with crutches. Between the ages of seven months and 17 years, he underwent 16 surgeries.

Instead of succumbing to defeat, he uses the disorder to break-dance using his extraordinary upper-body strength and crutches as arm extensions. During the festival, Patuelli presents No Excuses, No Limits, a motivational entertainment program that showcases his determined optimism.

“I share my story in an interactive way. I dance for them (kids) and I teach them dance moves. I share videos and pictures and at the end we do a dance party,” said Patuelli.

Part of the presentation is his two signature moves: flying off his crutches and landing on his hands as well as spinning on his elbow on the floor.

Patuelli credits his parents for allowing him to explore sports: skateboarding, skiing, swimming, horseback riding, skydiving, and cliff jumping. In each case, he adapted the sport to his abilities.

“They just said, ‘Let’s do it and we’ll figure it out later.’ That characteristic from my parents transferred to me. If I can’t do it, I’ll find a way.”

Along his journey, he formed Ill-Abilities, an all-star team of the world’s best “differently-abled” dancers that compete and perform internationally.

“I used to do battles on the international circuit every weekend. I’m 36 years old and I definitely don’t have the strength I had when I was 20. Now I do battles four times a year and I don’t do it to win. I do it to stay in the game.”

Patuelli co-directed and headlined the 2020 Paralympics' opening ceremonies in Vancouver. Canadian embassies also invited him to perform and discuss inclusion in Jordan and Rwanda.

“I’m here. I’m present and I’m thankful. There is nothing better than performing live, but having this (online) option has taught me to restructure and make what I do accessible to more people.”

No Excuses, No Limits is suitable for anyone six years and older. It runs Saturday, June 5 at 10 a.m. and Sunday, June 6 at 1 p.m. Tickets are $18. Visit https://stalbert.ca/exp/childfest/