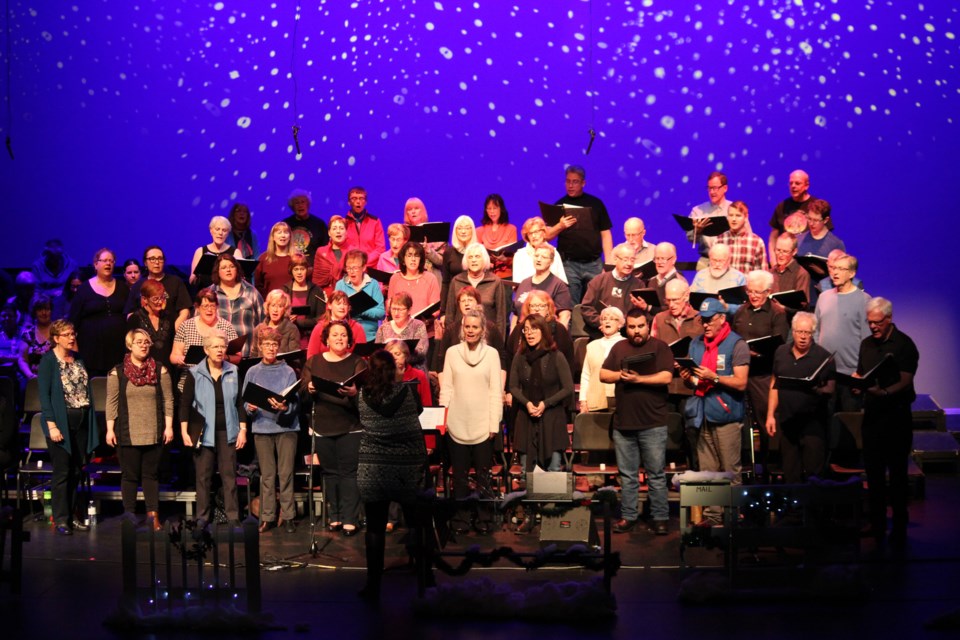 Call it Christmas with a twist.

The St. Albert Singers Guild is upending the traditional music of A Christmas Carol with an unconventional trip through Scrooge and Marley enterprises.

The 1951 British fantasy film, Scrooge, was a successful adaptation of Charles Dickens’ A Christmas Carol (1843). It firmly established actor Alastair Sim as the quintessential Scrooge, a wealthy skinflint doomed to a wretched existence.

Originally, this Dickensian tale of transformation and redemption was filmed using haunting music to create a supernatural aura. Conductor Criselda Mierau and the 79 singers offer a more upbeat, warm and fuzzy vision woven into a contemporary beat.

Although the original story was published more than 175 years ago, its message continues to cascade through the decades, sending ripples into modern times.

“For me, this is a story about hope and redemption. That’s a theme that speaks to me so profoundly. We see this miserly character that chooses misery. When the ghosts visit him, he chooses redemption. People can change. That’s hope and that is what Christmas means to me. And those of us who hold hope in our hearts need to share it,” said Mierau.

The singers originally produced A Christmas Carol in 2010, and they are bringing back John Kennedy as Scrooge.

“He’s a good actor. He puts a lot into his face and body and makes Scrooge a complete character," Mierau said.

Ian Skogstad, a 29-year Singers veteran, returns as the Ghost of Christmas Past, while Leo Bruseker reprises his role as Fred, Scrooge’s warm-hearted and spirited nephew.

“Leo has an incredible sense of humour and lightness. He’s been through some pretty tough times, but he elevates himself and it’s cool to see him do it again.”

Eric Mierau restores the ghost of Marley, Scrooge’s deceased business partner, even as Ed Toop comes back fundraising for the poor.

And Timothy J. Anderson, one of Edmonton’s favourite storytellers, also rejoins as narrator.

“Tim has such intuitive ideas and an organic quality. He understands what goes on and he brings neat, creative ideas that make a big difference. He brings a quality that elevates us.”

Assorted songs span from Put a Little Love in Your Heart found in the 1988 movie soundtrack of Scrooged to the 19th century hymn What Child Is This.

“In What Child Is This, we are joined by five bellringers from the church.”

And in the scene where Scrooge realizes there is no Tiny Tim, the choir sings Bring Him Home from Les Misérables.

“It’s not a Christmas song, but it works so well in this scene.”

As Scrooge looks back on his on true love, Belle, the choir sings the heartfelt When She Loves Me from Toy Story 2. And at the beginning as Cratchit fantasizes about heat while working in Scrooge’s chilly office, the choir belts out Donna Summers' big hit, Hot Stuff.

“Hot Stuff is a moment of levity in the concert,” laughs Mierau.