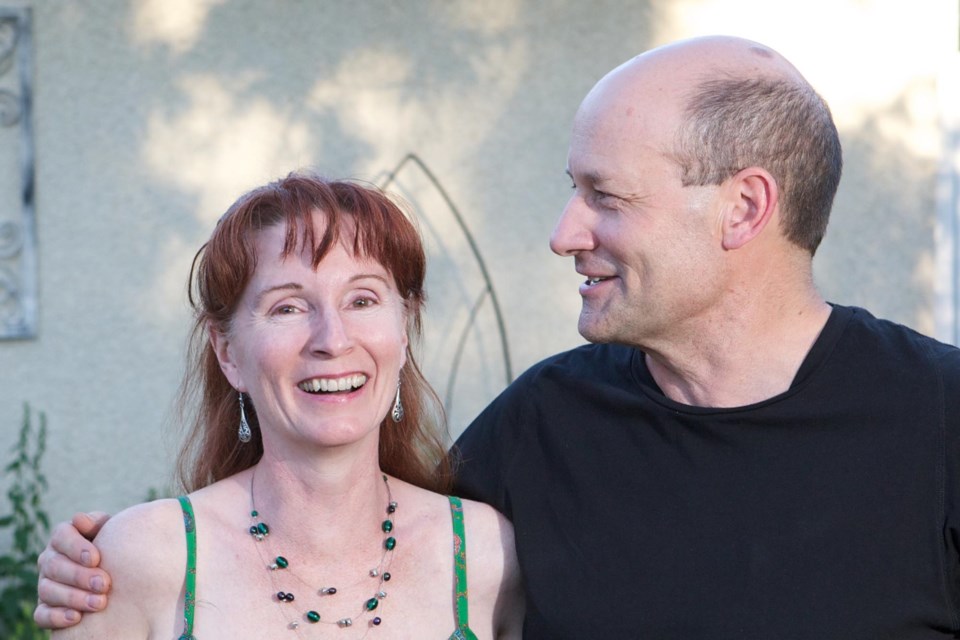 Maureen Rooney and Paul Punyi, one of St. Albert's most celebrated theatre couples are seen in happier times celebrating their 25th wedding anniversary. Today they are scrambling to rebook many of their bookings that were cancelled due to COVID-19.

The closure of schools and cultural institutions across the province has forced three St. Albert theatre companies to either shelve or postpone their shows.

Premier Jason Kenney on Tuesday, March 17, implemented measures to limit the spread of COVID-19 by cancelling all events hosting more than 50 people.

Within the city, perhaps the hardest hit is Rooney and Puny Educational Theatre Productions. In the past three decades, Paul Punyi and Maureen Rooney, a husband and wife duo, have developed a platinum reputation writing, acting, directing and producing plays, as well as instructing at workshops and artist-in-residence programs for schools.

In fact, they are part of the city's 2013 Cultural Wall of Fame as recipients of St. Albert Mayor's Celebration of the Arts Lifetime Achievement Award.

Since schools closed throughout the province, the couple’s income for the next five months has vanished.

“Paul and I live frugal lives. We never know when work is coming. We have carefully saved, but our savings for retirement have taken a beating, and our ability to earn money until September is zero,” said Rooney.

The one cancellation that is particularly heartbreaking is a commissioned play on Marie Madeleine D’Houet, the venerable founder of the Faithful Companions of Jesus Sisters. It was to open Thursday, April 16, in Edmonton with several productions, followed by 10 in Calgary.

“I spent two years reading everything I could on her and we spent money on a pilgrimage to France to research her. We created her and it was to open as part of the FCJ’s 200th anniversary.”

In addition to lost large-scale performances, the couple had to forgo school artist-in-residence programs, senior residence shows, a ukulele sing-a-long at St. Albert Public Library and an Arbor Day gig.

“We’re unable to reschedule performances. They’re gone. But we’re staying positive. We’re booking for next year. Applications to the Alberta Foundation for the Arts need to be in by May 1. We’re scrambling with schools to fill out grant applications for next year.”

This is crucial since theatre folk are paid show-by-show, contract-by-contract. Since artists are freelance operators, the federal government has always viewed them as self-employed and they are ineligible for Employment Insurance.

As for the federal government’s special financial aid package for self-employed individuals announced on Wednesday, March 25, Rooney said, “Our prime minister said self-employed people can access a type of EI. It shows a degree of respect for the arts industry. Previously the arts have never fit into any keyhole.”

Both a composer and lyricist, Oxley specializes at mounting musicals based on historical figures such as Louis Riel, Cleopatra and Klondike Kate.

Hey, Riel! was booked for two matinees and had sold 2,400 tickets to school groups, Indigenous groups and seniors.

“Teachers were booking up until the last minute. They were calling booking 150 tickets and then cancelling the next day. It’s heart-breaking, but we’re not the only ones affected,” said Oxley.

In the last few days, the St. Albert artist has juggled texts, emails and requests for refunds as well as answering cast and crew questions. Fortuntely, not everyone requires an immediate refund.

“Some ticket holders require an immediate refund, while many schools, other groups and individuals are currently in a position to let us hold on to payments while they wait for the show to be rescheduled.”

This unexpected cancellation has resulted in a loss of salaries for the professionals involved and honorariums for cast. In addition, Indigenous artisans invited to sell their crafts in the Jubilee’s lobby also lost income.

Always an optimist, Oxley said: “My cast and crew are ready to go at the drop of a hat and there are a lot of people standing by to help us.”

To salvage some income, Oxley is offering piano lessons via Skype. And while it may seem odd at first, it is the new reality.

On Thursday, Oxley and Tessa Mayne, 10, tested their first Internet lesson. The one-hour lesson lasted 90 minutes because the duo lost the connection on several occasions and at other times the video or sound froze.

“It kept cutting out and we had to redial. It’s not optimal but it is a help. It’s better than nothing,” noted Oxley.

Of the three local companies, St. Albert Dinner Theatre (SADT) is taking the smallest hit. But it’s still a shock.

SADT cancelled their third and final comedy of the season, Roger Cosgrove’s 1, 2, 3 and Flush.

“Basically right now we’re trying to find out how season ticket holders will react – whether or not they want to carry over their tickets or not,” said artistic director Donna Beeston.

“We want to make sure our patrons are safe. Our largest population is 50-plus and we wanted them to feel safe. For us, it’s not the dollars. It’s wanting people to stay safe.”

Beeston hopes patrons will hold onto tickets for next season and allow the community theatre a cash flow to pay for expenses such as rights to plays, venue rentals and assorted costs.

“Our priority is making sure everybody is OK.”