Dan Davidson, who received the most Association of Country Music in Alberta award nominations, walked away last Sunday with four awards. The St. Albert singer-songwriter won awards for Single of the Year, Video of the Year and Rising Star.
0
Jan 27, 2017 11:00 PM By: Anna Borowiecki 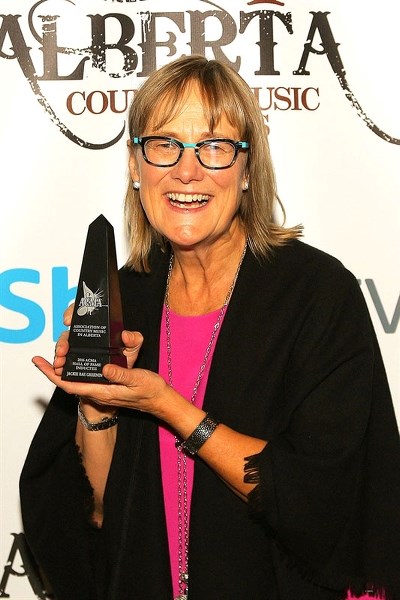 Dan Davidson, who received the most Association of Country Music in Alberta award nominations, walked away last Sunday with four awards.

The St. Albert singer-songwriter won awards for Single of the Year, Video of the Year and Rising Star. He also shared song-writing credits with Clayton Bellamy for Song of the Year.

“It’s been pretty crazy lately. Lots of things are happening. I’ve gotten lots of offers for big shows here and in Western Canada. I’m going to be heading out to Nashville soon and next Sunday I’m off to Halifax for an East Coast radio tour,” said Davidson, clearly excited about future prospects.

Celebrated at the Sheraton Hotel in Red Deer, the ACMA awards brought together the strongest and biggest names in the province’s country music scene. They included Canadian Country Music Award (CCMA) recipient Bobby Willis and St. Albert’s own Jackie Rae Greening who was this year’s Hall of Fame Inductee.

“Jackie’s such a sweetheart. She cares about music and people. She’s one of the good ones, and you don’t always meet good ones in this business,” Davison noted.

Scooping four trophies out of five nominations was a first in ACMA’s history, especially since the singer had only shifted to country about 18 months ago after a decade long career as lead vocalist for acclaimed rock band Tupelo Honey.

The first award Davidson captured was Song of the Year for his single Found.

“It was pretty exciting. I felt it was a strong song and it was a great way to start my branding.

When Video of the Year was announced, Davidson was surprised to win. The low-budget, indie video for Found was shot in two days with Davidson and a few friends mugging in mascot’s costumes: a moose, chicken, shark and a purple dragon.

“It was a wacky concept,” he said. “We went down a different path. The other videos were slicker, but mine was gritty. I guess the heart and soul came through.”

The third nod was for Single of the Year, an honour that brought out a few unexpected sentiments.

“Bobby Wills was up for it and he’s an established artist and had a very good year. To get that category is great. But it was starting to be a little silly. I was running out of things to say.”

And when the final Rising Star award was announced, “I started to notice the cameraman was hanging around. I keep shaking my head. It’s all sunshine and unicorns and I keep wondering if I’m dreaming.”

Scooping up four awards has created a lot of industry buzz and he’s had several offers for big summer shows. But before releasing details, he has to wait until contracts are signed on the dotted line.

Davidson’s second single, Barn Burner, just reached #31 on the Canadian Country Charts. With the addition of two major markets – Vancouver and Toronto – as well as a video shot in Japan, Davidson hopes the single will climb still higher.

“I’m pushing for a CCMA nomination. That would be incredible. Clayton Bellamy and his team are behind me and I’m heading out to the Juno Awards later in the spring.”