As with any award show, the Edmonton Music Awards are all about the winners. This year St. Albert’s own Dan Davidson scored for Country Recording of the Year with his ultra popular song Found.
0
Jul 8, 2017 12:00 AM By: Anna Borowiecki 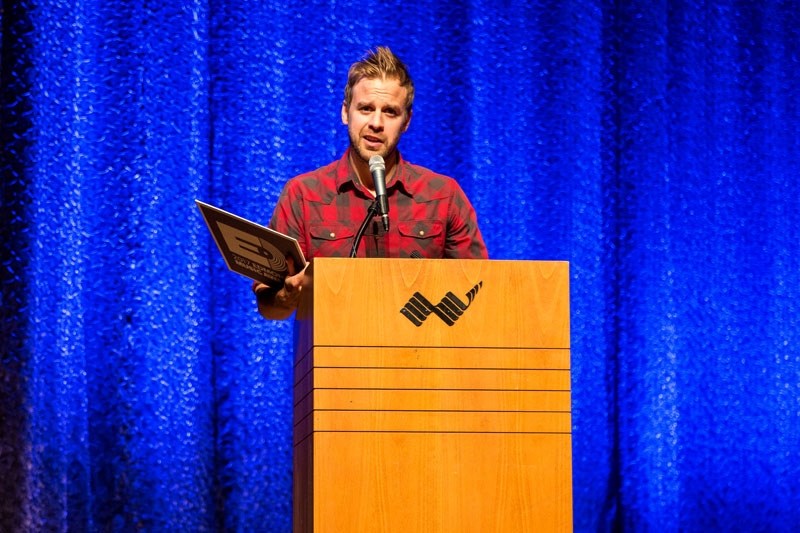 St. Albert singer-songwriter Dan Davidson enjoys a moment in the spotlight at the 2017 Edmonton Music Awards during his acceptance speech for winning Country Recording of the Year.

As with any award show, the Edmonton Music Awards are all about the winners. This year St. Albert’s own Dan Davidson scored for Country Recording of the Year with his ultra popular song Found.

Humble in his acceptance, the singer-songwriter was feeling the love and passing it on.

“It was a good night. The Edmonton Music Country Awards is a cool thing. For me it was more that as an organization they can get everyone in music in the same room, have some drinks and enjoy the evening,” Davidson noted.

He attended the gala ceremonies on June 29 at the Winspear Centre with his wife, Jen, radio tracker Bill Miller and Hands Up business partner Ari Mastoras.

“I never had any expectations. You never know who the jury is and how much they know about the different genres.”

The country artist was up against Ayla Brook & the Sound Men (Hold On), Olivia Rose (Please Maybe), The Dungarees (I’m Down) and The Misery Mountain Boys (Canadian Whiskey).

As the category winner, he was presented with an award printed as a record sleeve. The selection committee uses old records to reveal the winner.

“We have vinyl stickers made up for the record labels. The nominees are listed on the back of each record and then the presenter pulls the record out to reveal the winner,” said Mikki Dublanko, Edmonton Music Award director.

Proud of his achievements, Davidson notes his 2016 release skyrocketed up the charts and became the #1charting indie song for several weeks in July of 2016.

“It’s been pretty crazy. It’s unusual for an indie artist to have two consecutive hits and Found is nearly gold. It’s about 85 per cent there. It’s gotten a lot of attention and it’s even been in the same lane as some major label artists.”

Despite his recent success, the hometown success story is not resting on his laurels. Yesterday he released another single, Say We Did, a song written during a stint in Nashville.

“CMT is running an exclusive premiere for one week and then we can put it on Facebook and YouTube.”

Without a doubt Say We Did is a throw-caution-to-the-wind summer song.

“It’s about feeling good. Lyrically it’s about diving right in and living in the moment. It’s about reckless youth. And the music is very bright, familiar to Barn Burner, but it shows a different side of what we can do in country.”