“It’s a brand-new dinosaur exhibit that’s never been shown in Canada. It has the most modern representation of dinosaurs as paleontologists understand them today. This is the first time in history we’ve talked about them so much. This is a unique opportunity to immerse yourself in what it was like,” said Telus staff scientist Jennifer Gemmell.
Jul 1, 2021 11:30 AM By: Anna Borowiecki 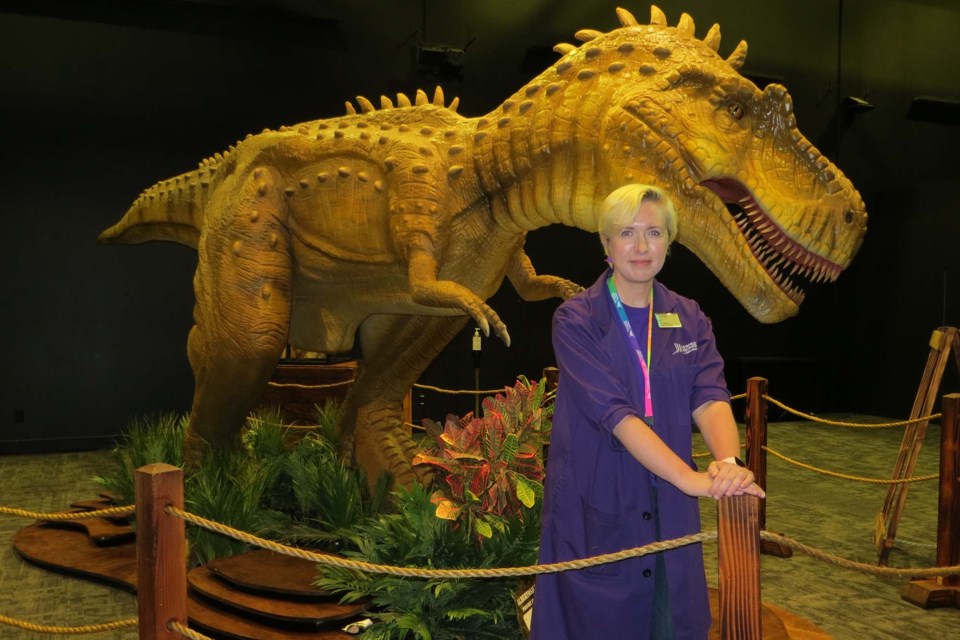 Jennifer Gemmell stands beside an Albertasaurus, a raptor that stretches nine metres from head to tail. The therapod is one of 11 dinosaurs at Expedition: Dinosaur, a new exhibit opeing today at Telus World of Science. ANNA BOROWIECKI/St. Albert Gazette

A two-story high Albertosaurus measures nine metres from head to tail and towers over spectators. It blinks, opens its mouth, and growls. The giant deadly-looking dinosaur looks so life-like you both marvel at and fear the razor-sharp teeth, massive legs, and swinging tail ready to wallop the next living thing in its path.

For more than a year, Telus World of Science has been silent – closed to the public. But it opens with a blast today, July 1, hosting an exhibit of those mysterious and amazing reptiles that roamed the Earth millions of years before their sudden extinction.

Expedition: Dinosaur taps into our fascination and curiosity about these prehistoric creatures, some that lived as far back as 165 million years ago. The life-like casts of dinosaurs and fossils gives us an inkling of what it would have been like meeting a living, breathing dinosaur prowling for its next meal.

“It’s a brand-new dinosaur exhibit that’s never been shown in Canada. It has the most modern representation of dinosaurs as paleontologists understand them today. This is the first time in history we’ve talked about them so much. This is a unique opportunity to immerse yourself in what it was like,” said Telus staff scientist Jennifer Gemmell.

The exhibit focuses on the Cretaceous period, a time when dinosaurs became extinct. Gemmell said the display takes visitors back in time. As people walk through the exhibit, they will come upon simulated dinosaur stations and activities before stepping into a futuristic lab.

Throughout the exhibit, centre scientists will be garbed in historical costumes prepared to answer the public’s questions.

“We’ve never done a historical exhibit like this before. We see value to use costumes to interpret and engage people and get them excited,” Gemmell said.

Alexander’s interest in paleontology and fossil hunting was sparked after attending the University of California, Berkley, Niemi said.

“Professor John Merriam invited his female grads for an expedition to Crater Lake,” said Niemi. Alexander was so enthused she offered to underwrite his upcoming expeditions.

Another little-known name outside the world of paleontology is Roy Chapman Andrews, a naturalist-explorer who led an expedition to Mongolia and the Gobi Desert, and unearthed the first clutch of dinosaur eggs in 1923.

“Some people think he was the inspiration for the Indiana Jones movies,” Gemmell said.

But it’s the animatronic, full-motion dinosaurs that intrigue and amaze. In one pod, two motion-activated Pachycephalosauruses appear to battle. About the size of a bull, they have long hind limbs and short forelimbs. Strangely, the roof of the skull is protected with an extremely thick plate.

“We believe they would use their dome-shaped heads to compete. There is evidence the dome was for possible sexual display or dominance. The dome is denser and has less blood vessels. It’s a place to defend against a high force. You wouldn’t want a high blood supply getting a risk of damage.”

In the next pod, two adult-sized Velociraptors about the size of month-old calves display a tangle of feathers. Smaller than many other dinosaur species, scientists speculate they would trail larger beasts and devour their uneaten prey.

One of the more interactive dinosaur pods is that of the baby Amargasaurus, an Argentinian herbivore that sports two parallel rows of tall spines down its neck and back.

“South America has more long-neck dinosaurs than anywhere else in the world. It had to do with climate, food supply, and lack of predators. If the extinction hadn’t happened, T-Rex would have migrated to South America. T-Rex is very competent, well-designed, and outcompeted all other theropods,” Gemmell explained.

For people who enjoy a challenge, manipulating a multi-finger robotic arm that rotates and moves simulated dinosaur eggs offers a different educational experience.

“You get to use a fully functional robotic arms with two controls. Kids can use the robotic arms, pick up and transport eggs to another clutch,” said Gemmell.

For young, energetic children searching for adventure, the exhibit is structured with two dig pits, a dinosaur paper-tracing station, and a mix-and-match dinosaur spinner.

In a nod to the 21st century, the cast of a 2.5-metre-high Carnotaurus head with teeth bared stands erect, ready for a photo op or a selfie.

Telus also offers Dinosaurs of Antarctica on its IMAX screen. It’s an opportunity to view how the prehistoric creatures inhabited Antarctic forests and swamps hundreds of millions of years ago.