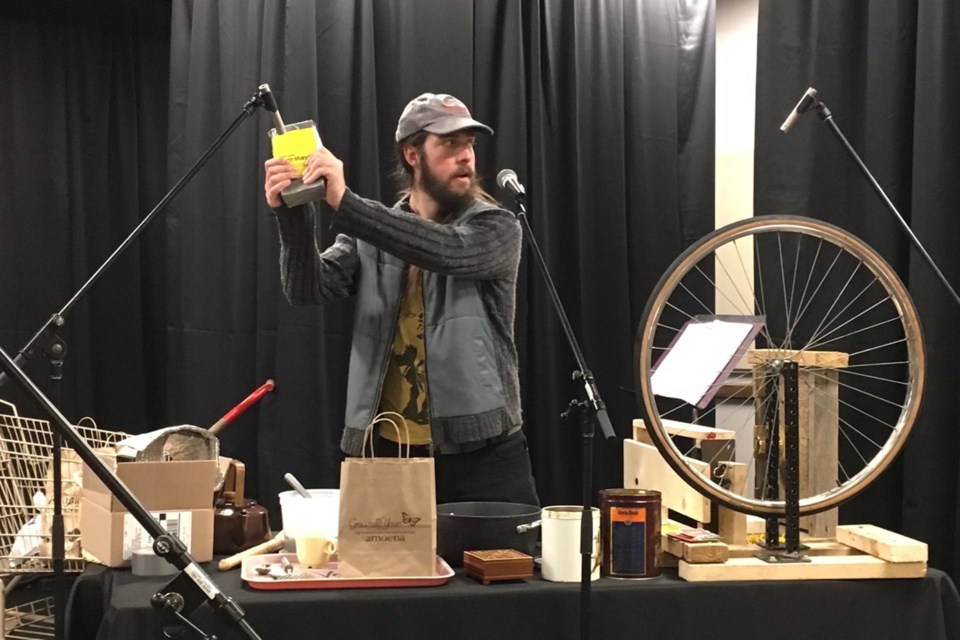 Street workers in particular are at risk of violence and abuse from pimps and clients as well as harassment from police and the public. Ultimately, it’s a degrading profession that leaves many women vulnerable and economically oppressed.

For a peeping Tom audience looking in, this is a world shrouded in a web of fascination and disgust.

And yet within the world of the streets, Koller provides a glimpse into how hookers have looked out for each other even in the most desperate of times.

The set of this four-character show is a radio studio where three microphones and accompanying stools are set up for actors to deliver their lines. Off to one side is a table packed with an assortment of household stuff used to create sound effects.

Ryder (Jake Tkaczyk) is a young self-absorbed pimp who is not above collecting an unpaid debt from one of his dead girl’s next of kin.

Nanny Grey (Judy McFerran) is a motherly soul who every day cooks a pot of soup for street workers. It’s her way of energizing them with nutritious food and providing hope.

Jodi (Erin Pettifor) is the lost kid who takes up residence in Nanny Grey’s garage in exchange for doing chores around the place.

There is a secret that ties the three together and like the onions that Nanny and Jodi peel to make soup, it has the power to bring tears or create a new richness in their lives.

The fourth character is Pete, the sound effects guy (Colin Matty) who twirls bicycle wheels, scrapes a shopping cart, bangs pans, slurps water and squishes what appears to be a juice box.

Whereas the three actors remain stationary and tied to the microphones, Colin Matty’s manoeuvres morph into a delightful show of “Oh-what-will-he-pick-up-next.” So much so that at times I found myself distracted by the sound effects and missed parts of the storyline.

The timing between spoken word and sound effects is meticulous with a lot of credit going to director Davina Stewart for keeping Hope Soup moving at a brisk pace.

The two shows packaged as one blend the heavy as well as light, fun stuff. Take a chance. Buy a ticket.