Girl in the Machine explores technology addiction in the digital age 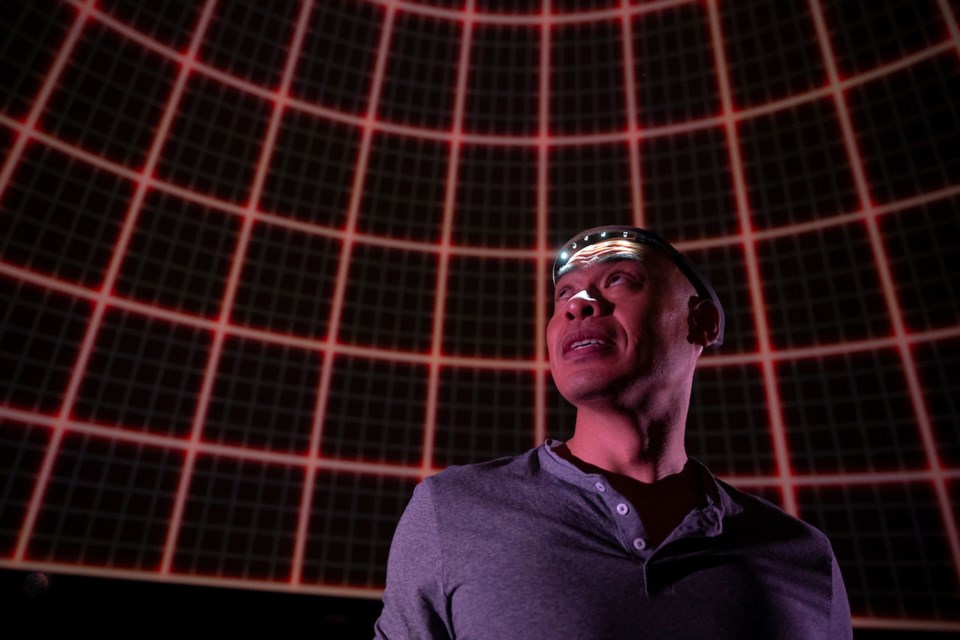 Owen (Mike Tan) visits the technologically addictive Black Box in Girl in the Machine playing at Telus World of Science from March 3 to 8. MARC J CHALIFOUX/Photo

Girl in the Machine

Whether you are a techno-geek, a technophobe or somewhere in between, Girl in the Machine carries a significant warning.

Opening today at the Telus World of Science Zeidler Dome, Stef Smith’s dystopian drama focuses on technology addiction and how machines are shifting our relationships to people.

Directed by Brenley Charkow, the emotionally charged story takes us into the home of Owen (Mike Tan) and Polly (Beth Graham). Both are professionals. He is a nurse. She is a corporate lawyer.

Polly leads a high-stress life and has difficulty relaxing away from the office. When Black Box, a virtual escape headset, arrives at the couple’s home, she experiences ecstasy.

“It’s blissful and allows her to relax. She escapes into another world and it drives a wedge between Polly and Owen,” said Graham. “When she discovers the powers of the Black Box, she becomes addicted.”

Although the technology is introduced into society as benign, it ultimately develops a sinister quality. It offers Polly the option to forever escape into a blissful world.

“All she has to do is upload her consciousness and leave her body behind.”

Meanwhile, as Polly tries to escape reality, Owen deals with the real world. As a nurse, he’s seeing an uptick in technology addiction and it concerns him.

The new technology divides the couple when both find different answers to the same question: would you want to live forever?

“It’s really relevant to our times in terms of what technology gives us. There are definitely wonderful things, but there’s a dark side too. There’s a cautionary tale to it,” Graham said.

By mounting Girl in the Machine inside Zeidler Dome, it offers audiences the same 360-degree visual experience Polly enjoys.

“Projections are done when I go into the box. It’s all encompassing. The audience hears sounds and sees the technology all around us. It’s in it with us. It cranks the show up a notch.”

Although the 75-minute play is a two-hander, Patricia Darbasie voices Black Box.

As Graham describes it, the voice is “soothing, mesmerizing and all-encompassing.”

The one-act is unnerving and unsettling. It’s meant to be.

“It’s something we can relate to not just in terms of the power of technology. It’s a good story and an exciting experience because of the space we’re in.”