Jerky movements and quick, clipped sentences are spit out with the speed of a runaway train about to crash during Studio Theatre’s season opener God’s Ear.
0
Oct 15, 2016 12:00 AM By: Anna Borowiecki 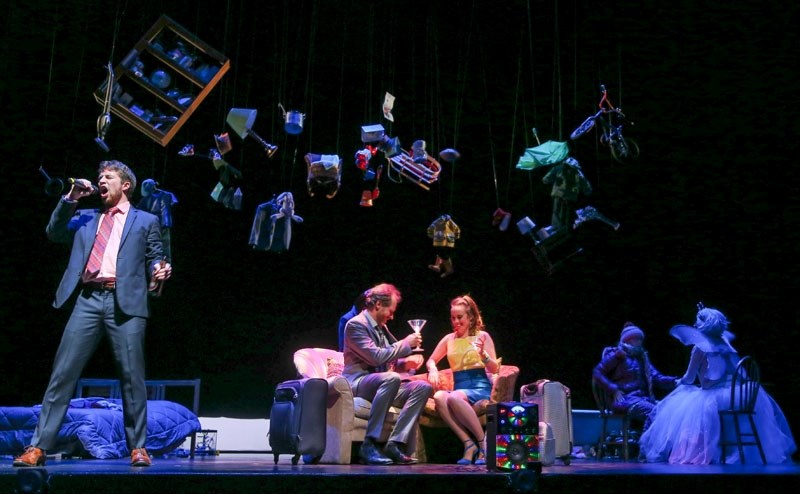 Jerky movements and quick, clipped sentences are spit out with the speed of a runaway train about to crash during Studio Theatre’s season opener God’s Ear.

American playwright Jenny Schwartz has written a play that is both fascinating and frustrating and at the end challenges you to wonder what it’s all about.

At the onset a tormented man and woman move through a surreal landscape at times prattling incoherently with gushes of fragmented babble.

The play opens in the dark with a single flashing light. Suddenly household objects on wires are lifted toward the ceiling where they dangle throughout the play.

In this hallucinatory sphere, the world has turned upside down and everyone is trapped in a nightmare with no escape.

Mel (Lora Brovold), a visibly tormented woman is desperately trying to contact her out-of-town husband, Ted (Chris Bullough). She needs to tell him their 10-year-son is in a coma following a drowning accident.

She speaks in detached snippets of four or five words desperately trying to grasp reality. And when she blurts out that the hospital has asked her to consider organ donation, the scenario’s brutality sets in.

Throughout the rest of the play Mel and Ted operate on autopilot. They are trying to cope with grief in an emotionally frozen alternate universe where the only way to survive is by blunting the personal pain and horror of their lives.

They avoid each other yet speak to no one in particular with repetitive and trite chitchat, stacks of clichÄ‚Â©s, and rhymeless verse.

In their grief, Mel and Ted talk about the past and future, yet hesitate to discuss the present. It’s as if they want to erase its existence.

This intriguing concept of God’s Ear, under the direction of Suzie Martin, completes her two-year thesis project. It’s a massive venture, but with the support of an inventive production team that includes St. Albert’s Karlie Christie, the backstage artists create a powerfully graphic world gone wrong.

Brovold contributes some excellent work as an anguished ranting mother/wife wrapped in guilt. Bullough, with his lean, hungry look, is an equally powerful counterpart as the angry, tortured father/husband looking for relief in the arms of other women.

Ted meets the blonde, curvy Lenora at an airport lounge and one drink leads to more. St. Albert actress Sarah Ormandy’s Lenora sashays around the stage chattering like a magpie while craving affection that may never come. She too is one of the walking wounded.

Emma Houghton as Lanie is superb at conveying every childish and childlike nuance of a six-year-old daughter. Sarah J. Culkin, garbed in a tulle skirt, fake blue wig and half-moon shaped wings as Tooth Fairy, creates a delightful escape for the audience, as does Philip Geller in a dual role as a pushy transvestite flight attendant and muscular, gun-toting G.I. Joe.

Despite the clever writing, masterful monologues, and captivating set, you stop caring for the characters. They play the same games and the repetition becomes boring. Although a tragedy unfolds in front of our eyes, the emotional stakes get lost in a muddle of clever phrases.

God’s Ear runs at the Timms Centre for the Arts until Oct. 22.