Paul Kane grad Hailey Benedict is taking a year off to keep writing music in the hope the Canada-U.S. border will open up and allow her to attend Nashville's Belmont University or Boston's Berklee University.
Jul 9, 2020 12:00 PM By: Anna Borowiecki 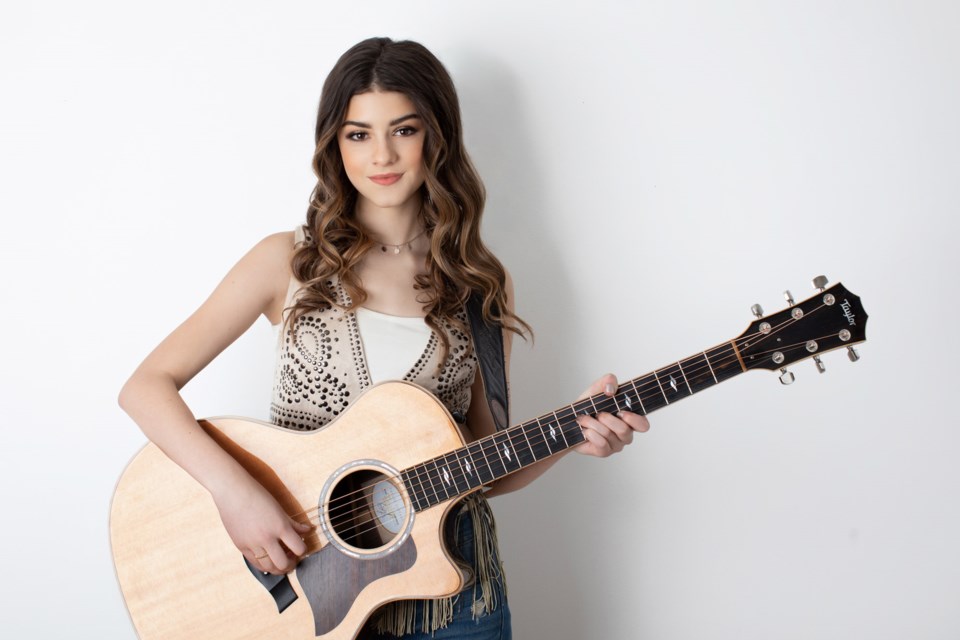 Hailey Benedict,18, refuses to allow COVID-19’s restrictions get her down. The Paul Kane High graduate just finished a song-writing session on Skype with Nashville writers Tamara Laurel and T.J. Simpson.

“We have lots of fun writing together. Lots of our songs are well-thought out with a deeper meaning,” said Benedict.

Within the last few months, the St. Albert singer-songwriter has been hit with a triple whammy. First, the COVID-19 pandemic forced social distancing and nixed in-person classes.

Then graduation ceremonies were cancelled, robbing students of a fancy-dress prom night where they could share memories before most drift away to the next phase of life.

“Any Grade 12 feels the same way as I do. You go to school for 12 years, and not having the last three months to say goodbye is disappointing,” Benedict said.

The last hit came when Canada-U.S. borders closed to non-essential traffic. Back in February, she traveled to the United States to audition at two elite music-based institutions: Nashville’s Belmont University and Boston’s Berklee University.

“I was accepted at Berklee and received a scholarship, but it wasn’t enough for tuition and with COVID it’s not a possibility.”

But it was Belmont that grabbed her attention.

“The campus is huge. It’s right on Music Row (home to record Nashville's label offices, recording studios and radio stations.) Everyone is so kind and nice. It almost felt like Hogwarts. It seemed like a community-based school.”

Sadly, the SAT exams she wrote for Belmont are stuck in lockdown in New Jersey and were unable to reach the university in time for registration.

“I’m going to take a year off and keep writing and hopefully the border will open up.”

In Grade 10, she was cast as Cosette in "Les Misérables." The following year, Benedict nabbed the lead role of Christine in "Phantom of the Opera." This year, she showed off her musical chops as Matilda in "Matilda the Musical," an adaptation of Roald Dahl’s novel about a precocious five-year old with telekinesis abilities.

“But Christine was always my dream role. I saw the show on Broadway and I definitely wanted to play her.”

Outside school hours, Benedict performed at events too numerous to count. As a vocalist, she has a powerful, genre-bending voice equally at home in musical theatre, pop and rock.

But it’s the country scene where the singer has made the greatest impact. The Association of Country Music in Alberta paid homage to her talent, charm and stage presence with a 2014 Fan Choice Award and 2019 Horizon Youth Award.

“The fan choice is really cool because it’s from the people who listen to your music, and the Horizon Award is cool because there are so many talented youth in country music.”

The time leading to graduation is not only a time of celebration. It is also a rite of passage, an opportunity to pause and reflect on the past while planning for the future.

In a quick look-back of highlight achievements, Benedict mentioned the song "Dare To Be A Hero," a tune she wrote in honour of RCMP Const. David Wynn after he confronted an armed man, was shot and killed in the altercation.

“I donated the proceeds to the RCMP.”

She has performed for just about every major charity in Edmonton and was as a soloist in the Edmonton Singing Christmas Tree for five years. Benedict received notable international attention when a video of her impromptu original performance at Rogers Place with country superstar Keith Urban went viral, scoring 10 million hits.

Her single proudest accomplishment was being named the 2017 Global Woman of Vision.

“It was neat because it was a philanthropic award for the work I did. There were so many inspirational women that were part of it. I met Kim Campbell, a former prime minister. Just being part of that was a huge honour.”

Benedict has written and recorded a variety of original material, including “Next Time Around,” “Clean Slate” and “Crazy.” There are even rumours that #T8NTogether is planning a video using her "Alberta Home" song.

“All these experiences have shaped who I am and I’m excited for the future. If there’s anything COVID taught me, it’s to keep persevering and go with the challenges.”