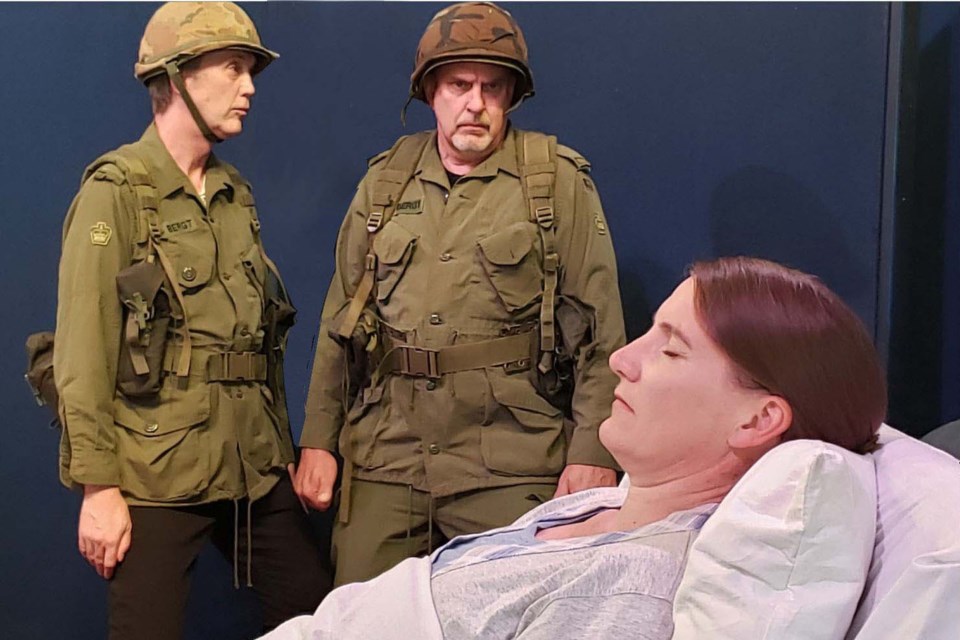 Who Goes There?, a drama that weaves together the stories of real people, runs at Holy Trinity Anglican Church on Nov. 8, 9 and 11. From left to right: Timothy J. Anderson, Andy Northrup and Becky Seck.

Inspiration for plays comes from many corners: a lover, an enemy, lack of justice, attention to inequality – the list is endless.

However, Who Goes There?, Edmonton playwright David Belke’s latest artistic project, is fashioned from the stories of hundreds of individuals.

At the invitation of the Yale Institute of Sacred Music, Edmonton’s Holy Trinity Anglican Church sent out volunteers to collect the personal thoughts and stories of young and old. Interviews were collected at a variety of sources – day care centres, seniors’ residences, youth shelters, schools and combat veterans of Southern Alberta Light Horse.

Belke received the stories and fulfilled the challenge of cobbling all the diverse sentiments into Who Goes There?, running Nov. 8, 9 and 11 at Holy Trinity Anglican Church Sanctuary.

“David made a play about people’s lives and he tried to make it as verbatim as possible,” said director Alison Wells. “It’s about keeping memories of people alive so they live on.”

“It’s set in a hospital where a soldier comes in for checkups – physically, mentally and emotionally. He meets a woman patient who died and came back. She doesn’t know what is real. She wants to talk about life, birth and death,” explains Wells.

The duo starts interviewing and recording other strangers’ narratives, and from hearing the accounts of others, they are finally able to face their own tragedies.

Wells believes one of the play’s major themes is a call to listen and hear each other.

“We lead such busy lives we tend to forget about those around us. If we listen more, maybe we will find more understanding of other people. And possibly more listening will create more empathy.”

Anderson picks up multiple roles including that of two doctors, a soldier and a four-year-old, while Donald is both a pregnant woman about to give birth and a 12-year-old teenager. Patterson plays a streetwise kid and a nurse, while Young is an old woman in a hospital.

Wells notes Who Goes There? differs from anything Belke has written in the last two decades.

“He usually writes clever, witty and funny plays. The dialogue in this play is verbatim, however David has taken artistic license and amalgamated the characters. It is their stories and what comes out of their mouths.”

“There’s a lot of lovely levity that takes away from the sad and sometimes terrifying moments for people who recognize what is happening.”

Wells ended the interview by saying, “I would like people to leave with their ears and eyes open to hear other people’s stories – not just dismiss a five-year-old or an older person. I want people to listen and realize every life has a story, and you will find a volume of fascinating stories in this play.