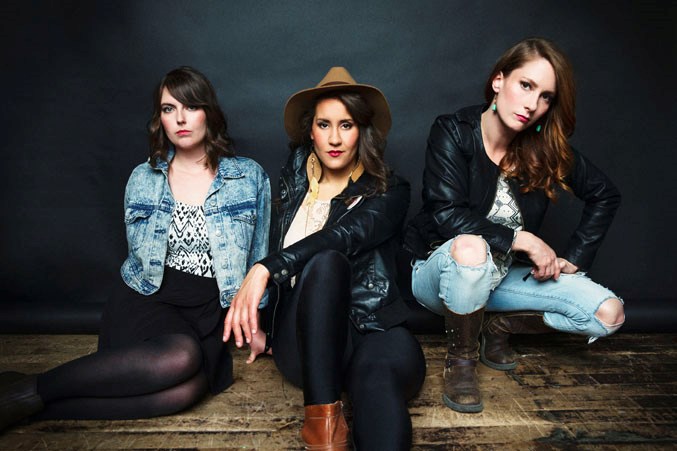 The Winnipeg-based Sweet Alibi is in the middle of a 40-day tour and will drop by the Arden Theatre on Friday, Nov. 10.

You've heard of campfire sing-alongs? Now picture four women jamming in a van while driving across snow-covered, empty prairies. Sweet Alibi, a Winnipeg based folk-pop trio and Ontario born, country-roots singer-songwriter Jadea Kelly let their creative juices flow in a 40-day western Canadian tour that stops at the Arden Theatre on Friday, Nov. 10. Sweet Alibi hails from Winnipeg and they are Jess Rae Ayre, Amber Nielsen and Michelle Anderson. The  powerhouse threesome are smart, sassy singer-songwriters that deliver a powerful blend of vocal harmonies and catchy music. Their third album Walking in the Dark was released in 2015 and unloads a bold, confident sound. "We feel sexy. We feel empowered as women in the industry. It's been a struggle. We have the sex appeal and we know sex sells. But we also want to control the message," says Nielsen, describing the trio's intangible visual appeal and connection to the audience. Sexiness aside, it was Walking in the Dark's heartfelt lyrics of struggle that touched people. One song that produced a huge wave was Jess Rae Ayre's song Middle Ground. She quit drinking five years ago and as with many addicts latched onto a different addiction, Nielsen explained. "Middle Ground is about trying to find balance, that perfect place in the middle." Sweet Alibi has spent the last eight months touring feverishly and since they share a manager with Jadea Kelly, it was natural for the foursome to hook up. "We enjoy singing together. We enjoy each other's company. We enjoy getting on stage and sharing each other's stories," Nielsen says. Kelly, who splits home time between Nashville and Toronto, lives out of a suitcase. "I've been a gypsy hobo for two years. I do two or three tours a year and the rest of the time I work at a real job. But being on the road is a great way to learn about yourself." She has released three albums and her 2016 release Love & Lust is a compelling, honest and personal album that digs deep. It travels through painful emotional territory delving into love, infidelity, heartbreak and forgiveness. "It was an album I needed to make," said Kelly using guarded language to describe a bad breakup. "I thought if Dolly Parton can write Jolene, then Mariah is my Jolene." At the moment, Kelly is planning a more "lighthearted" album for release in 2018. Two of those songs include Make Peace, a dedication to her sister, and Any Old Boat, inspired by watching Canada Day fireworks on the water. Guitarist Tom Juhas accompanies Kelly on stage while Jess Ayre will sing harmony. As Nielsen describes their concerts, "We're crazy and we enjoy what we do. We try to bring something different to every show and there will be lots of jokes."