Key entertainers coming to the Arden Theatre in 2018

Two Grammy-nominated singer-songwriters are among the eclectic lineup performing during the 2018 Arden Theatre winter series.
Jan 2, 2018 2:15 PM By: Anna Borowiecki 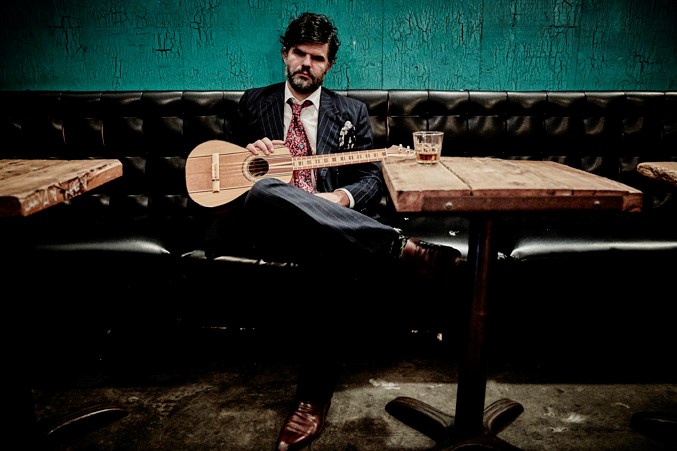 Kobo Town drops into the Arden Theatre on March 29 for a foot-stomping, hand-clapping evening of calypso and world music.

Two Grammy-nominated singer-songwriters are among the eclectic lineup performing during the 2018 Arden Theatre winter series.

American singer-songwriters Lisa Loeb and Iris DeMent make their debut appearances among a slate of performers that bring together two speakers, family shows and concerts of every genre from pop-rock, folk and Celtic to country-roots, blues and calypso.

"We had a great start to the year. We were jam-packed and really busy. The front half of the year was more packed with a lot of new artists as well as repeats," said professional programming presenter Caitlyn North.

"We had five really good sold-out shows. The Everly Brothers, SteelDrivers, Birds of Chicago and Alex Cuba. And the Ennis Sisters definitely put the spirit of Christmas into the season."

One surprise from the season's first portion was Indigenous folk-roots artist William Prince on a western Canadian tour from his Winnipeg home base.

"He was absolutely amazing and made a ton of fans," said North. "And AHI who opened up for The Small Glories was definitely a surprise to me and all the patrons. I didn't know much about him, but he's very soulful and he had so much great dialogue. I've had multiple requests to bring him back."

North believes the season's winter portion between now and the end of April will be equally entertaining and celebratory.

The Morinville-born, world-renowned fiddler has been playing non-stop since he picked up a fiddle at age eight. A musical prodigy, he is a two-time Grand North American Fiddle Champion and was inducted into the 2011 North American Fiddler's Hall of Fame. A prolific composer with well over 50 recorded albums, Vollrath believes he's just getting started.

"He's such a connection to this region where he had some of his earliest performances at St. Albert Community Hall. He's such an accomplished musician and you get to see someone of his calibre in an intimate setting," said North.

Singer-songwriter Lisa Loeb's career skyrocketed to instant fame when her pop single Stay (I Missed You), from the film Reality Bites went platinum. Since then, the California-based artist has ventured into numerous directions in children's albums, scoring a musical, acting and writing books.

"Lisa is a throwback to my childhood. Her big hit Stay was huge. Lots of people don't realize how busy she's been since there. She writes for kids. She's done voice overs and written for Broadway musicals. The last time I saw her was at the 1990 Lilith Fair and she's just released a new album, Lullaby Girl."

Frank Warren developed a project titled Post Secret where strangers anonymously mail him their private thoughts which he posts. This project has grown into a pop culture phenomena where we learn about people's secrets – those that make us laugh and those that bring tears.

Iris DeMent is a trailblazer. Her independently released 1992 debut album Infamous Angel garnered so much buzz it landed her a deal with Warner Bros. Since that incredible start, DeMent has released a series of outstanding recordings that earned her multiple Grammy Award nominations and critical acclaim. Some of her biggest fans include the likes of Steve Earle, John Prine, and Emmylou Harris.

"She's such an accomplished and amazing songwriter. She's very well known in the songwriting community, however, she flies under most people's radar. She's very prolific in writing new music, and she's an artist that doesn't come to this part of the world often, so it's exciting to present her."

Based on illusionist Sheldon Casavant's illustrated children's books, Morton the Magician: Ta Da! was the surprise hit of the Edmonton International Fringe Festival. It's a tale about a young boy dreaming about becoming a magician – if only he can overcome his fears.

"It's such a sweet story and it gives kids the idea they can do anything. Morton is charming and relatable. That imbued with Sheldon's magic tricks makes this show amazing," North said.

Paste Magazine recently honoured Ritter as one of the "100 greatest living songwriters." Ritter has a knack for seducing fans by spinning stories of struggle and redemption against a backdrop of rustic Americana and lively rock 'n roll.

"He is super-charming and knows how to command a room like nobody else. He has quite a bit of wit and is fairly playful and he's be singing songs from his 2016 album release Sermon on the Rocks."

"I've had the chance to see them perform five or six times and they are one of the most captivating folk-roots bands with a Celtic tinge I've ever seen. They won a Juno in 2017 for their traditional 2015 album, Secret Victory, and have since put out a new record titled What We Leave Behind."

A curious blend of Mexican-Irish roots, Ortega has always followed her own path. Nominated for numerous awards and winner of the Canadian Country Music Association 2014-2015 Roots Artist of the Year, Ortega is about to embark on an extensive tour of Canada and the United States to promote her latest EP release Til The Goin' Gets Gone.

"She has such a haunting voice. She's an interesting and fresh singer-songwriter. She hasn't done many theatres. She normally does the night club setting and it's nice to get her in a room with people listening."

Adopting its moniker from the Port-of-Spain, Trinidad neighbourhood where Calypso was created, Kobo Town takes a light approach to the bootie-shakin' genre. Kobo Town has received several nominations for their expressive yet laid-back Caribbean vibe.

Freelance journalist Amanda Lindhout discusses the 460 days of her hostage taking in Somalia and how after her rescue, she has pushed forward in a life of compassion, recovery and philanthropy.

"She's just released a best-selling memoir and there have been numerous developments since then. One of her captors was sentenced in a Canadian court just a few weeks ago. It's amazing that after a traumatic experience she could come back and pick up where she left off."

Rob Williams and Casey Martin zip across the stage doing feats of balance and acrobatics laced into comedy routines.

"I've seen them as street performers at festivals. They developed some notoriety and got a shot on America's Got Talent. They're a fun variety duo - a Jack-of-all-trades."

Edmonton's Beth Portman and her band the Good Find have turned vintage music into an art. As a songwriter, Portman muses on life and love with humour and a dash of sass.

"She's closing out the season with a performance at St. Albert Community Hall. She has a real vintage vibe that is quirky and nostalgic. It's got a sunny, jug-band sound that comes from the Django (Reinhardt) era.