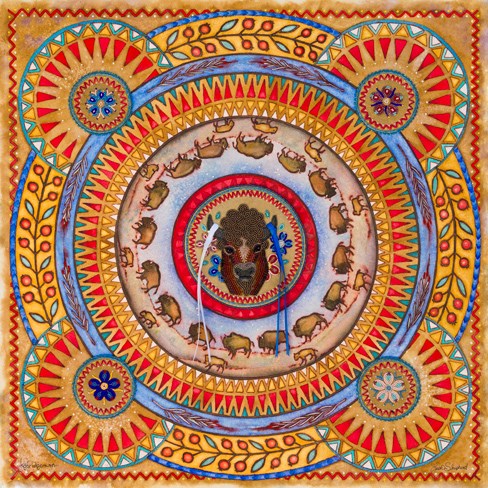 Last year, Parks Canada reintroduced 16 bison to the Panther Valley in Banff National Park. This piece called paskkwâwmostosak pê taksinak kâwiy (“The bison have come back again”) was created in celebration of the reintroduction of the species.

Works by Lisa Shepherd and Kristi Bridgeman, and Carey Newman

As cultural analogies go, there are few that are more apt than the one that West Coast master beader Lisa Shepherd uses to describe the diaspora of the Métis across the provinces and territories.

“We have our whole story that is just like they’ve shaken it up and then they threw it in the air and it landed all over the country in different places. The Métis people have been going along and picking up a little piece of the story, picking up a piece over here, and just putting it together in order to see the whole picture. That’s very much what it’s been like for us.”

It sounds a lot like what happens with a bowl of beads let loose upon the floor. Shepherd has been working to put all of those beads together, both metaphorically and literally in her glorious designs as part of the exhibit Forget-Me-Not, Métis Rose that she worked on with children’s book illustrator/painter Kristi Bridgeman.

The two only discovered their common ancestry five years ago as Shepherd was doing research at the Jasper-Yellowhead Museum and Archives.

“I became aware that our family was from that land going back before it became a national park. I discovered an amazing beadwork artist that would be my cousin Suzette (Chalifoux) Swift. So I was very, very interested in learning all about her and going and seeing her work,” she said, mentioning the thrill of actually handling some of Swift’s elaborate raised beadwork items.

“Fast forward a few years, I was involved with Walking with Our Sisters and a pair of moccasin vamps were put up on the Facebook page. They just jumped out at me. So I started reading about it and this person Kristi (Bridgeman) was writing about how she had done them to honour or in the style of her great nan Suzette (Chalifoux) Swift. I said, ‘Oh my goodness, I’ve got a relation out there.’”

The two joked that it was an instant connection between them aided by one living in Victoria and the other just a ferry ride away.

“It was surreal,” said Bridgeman.

“We really hit it off,” Shepherd continued. “I came to our relationship with lots of understanding of the history and cultural knowledge about the Métis but what I was missing was the family stories. Kristi had all of that. As I was sharing some of the knowledge, so many times she would say, ‘That’s just what my nan used to say’ or ‘Nan used to do this’. It would be something that just connected together.”

“For me, it was very validating that all of this knowledge that I had been taught by elders, I’m hearing about it firsthand from family that it was absolutely accurate for our family that was there in Jasper. That was really exciting. I think this whole journey has been one discovery after another.”

That discovery continues to enrich their lives just as much as it enriches the intricate art that now graces the walls of the museum. Each piece contains significant cultural symbols like bison or bunchberries, flowers and animals, sometimes painted on the canvas by Bridgeman, sometimes beaded onto leather by Shepherd.

It’s easy to estimate that collectively the two have spent hundreds and hundreds of hours working together. Where Shepherd has a lifetime of connection with her Métis ancestry to rely on, Bridgeman makes up her share by meticulously researching the authenticity of stories and the symbols to ensure that the pieces would be approved by Swift herself.

“It is like layers of an onion,” Bridgeman said. “She’ll say something and I’ll add something to it. ‘Oh, okay wait a minute. What about this?’ It’s snowballing because we’re finding out just based on the beadwork, we’re finding out that this design was done here and so that leads us on a journey and a topic that will come up.”

“With the new pieces that we’ve added in, we’ve gone a little bit deeper. We’ve peeled away another layer and gone back another generation and learned a little bit more. Every piece that we’ve done, both of us, we’ve learned so much,” Shepherd said. “It was like going back one more layer to what our great-great-grandmothers would have been doing.”

They agree that there is still much to explore.