Obsessions Octet plays for the love of music

Whether you celebrate Valentine’s Day or not, romantic love is on everyone’s mind. There are many kinds of love, but one rarely discussed is a musicians’ love for their music.
Feb 14, 2017 11:00 PM By: Anna Borowiecki 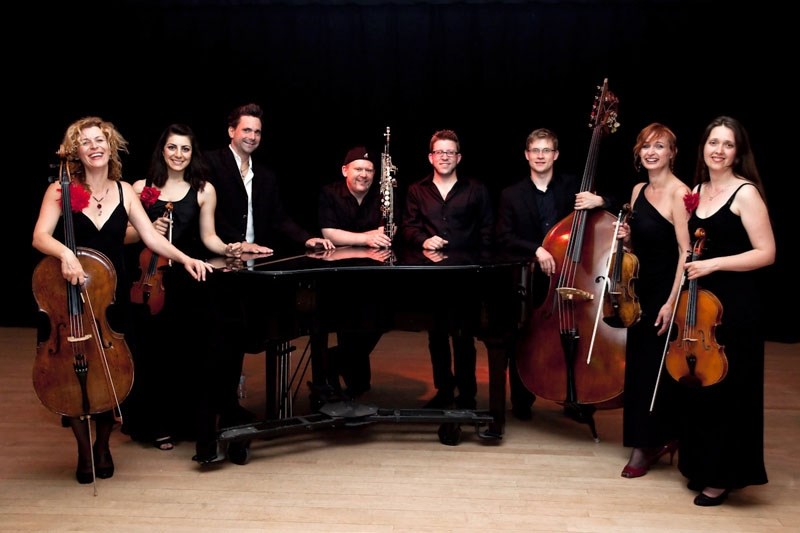 Whether you celebrate Valentine’s Day or not, romantic love is on everyone’s mind. There are many kinds of love, but one rarely discussed is a musicians’ love for their music.

Obsessions Octet, without a doubt one of Canada’s living treasures, is gearing up to play For the Love of Jazz on Thursday, Feb. 16 at The Needle Vinyl Tavern.

Led by Kent Sangster, usually seen on centre stage playing one of his three saxophones, the award-winning octet is building a magnificent legacy on the jazz scene.

At the Thursday concert, they are playing instrumentals from their three albums – Steppin’ Up, Melodia and the original self-titled CD – and of course, from Astor Piazzolla’s vast repertoire of sensuous tunes.

“Piazzolla – that’s where it all started,” says Sangster, a master musician, composer, arranger and artistic director of the Edmonton Jazz Festival.

Founded in 2005, Obsessions Octet developed an elegant mix of tango, classical and jazz. Their first self-titled album was nominated for a Juno Award in 2007 and a year later Obsessions received a Western Canadian Music Award.

Their success in Canada and across international borders lies mainly with the eight musicians’ ability to improvise jazz using a classically trained technique.

The trio is on permanent contract with Edmonton Symphony Orchestra, and performs structured classical masterpieces on a weekly basis. Yet their eloquence is such that they have the skill to spiral into a jazz improvisation at a moment’s notice.

“Jazz is a sophisticated art form. By definition, it’s not popular music. It’s not mainstream. It takes effort to get inside the music and when you make that effort, you get to be really good,” Sangster says.

Just as Sanborn influenced the direction of jazz, Sangster is shifting from the octet’s early tangoesque jazz to experimenting with funkier electronic elements.

Sangster is introducing an EWI, an electronic wind instrument that harnesses a computer to generate sound. The USB interface allows it to perform, create and record a whole collection of wind instrument sounds.

“It has a very dynamic range and allows you do a lot, providing I can remember how to play it,” laughs Sangster.

In closing, he adds, “It’s been a challenge to push the group along. But every time we have an opportunity to play, we are grateful to present our music. It takes effort and expense to put out a record, but live music is what we love to do.”