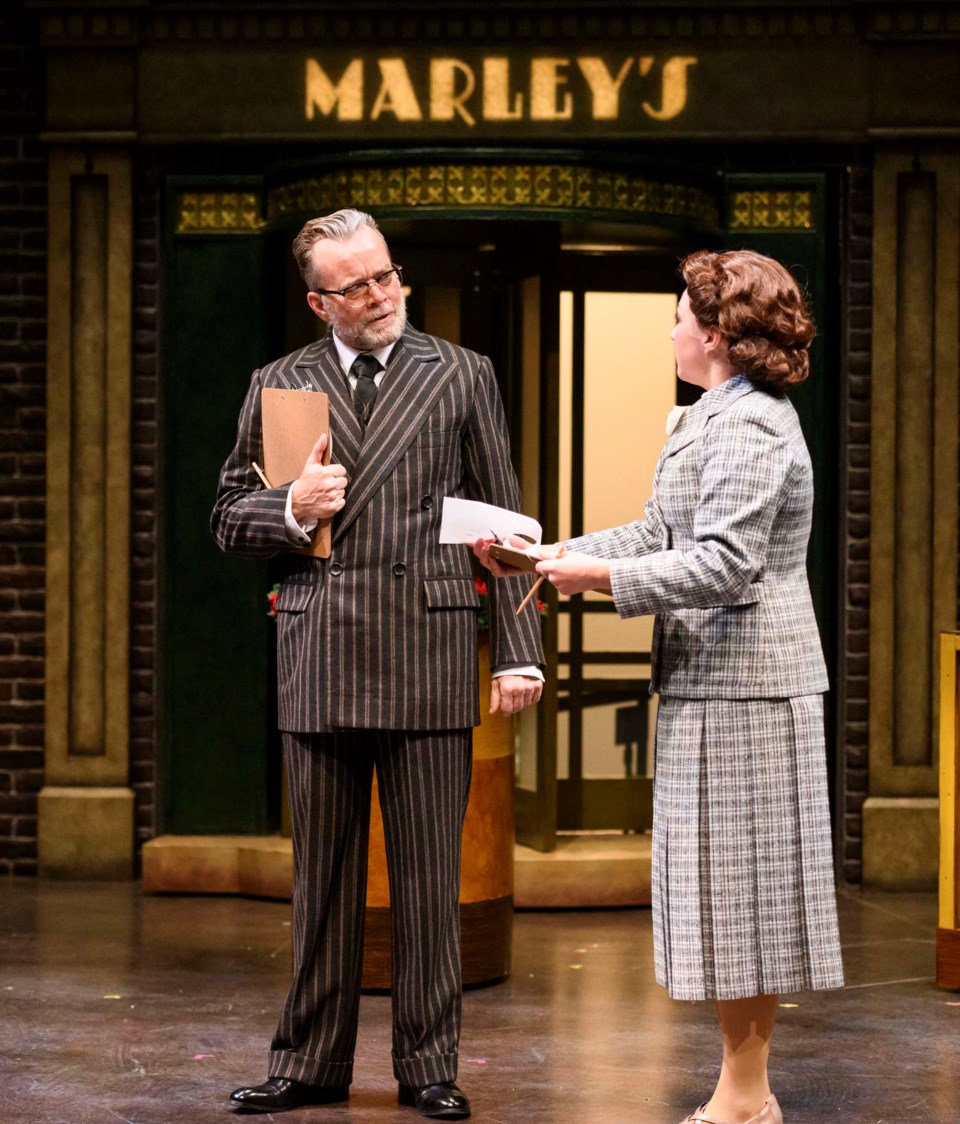 St. Albert-raised actor Ted Dykstra plays Scrooge, owner of Marley's Department Store in an updated version of A Christmas Carol. In the 2019 theatre version, he orders his assistant Mrs. Cratchit (Alison MacDonald) to report to work on Christmas Day. This year, a filmed version will start streaming Dec. 15. IAN JACKSON/Photo

For all his flaws, that cantankerous old skinflint Ebenezer Scrooge has been a bonanza for Canadian theatre. Through dramatic oil drops and blustery Arctic highs, he has attracted packed audiences to his redemptive story in A Christmas Carol.

“Back in March when shows were being cancelled and postponed, the one show we wanted to find a way to save was Christmas Carol. It’s an important tradition in Edmonton and we went through many evolutions to save it,” said Citadel Theatre's artistic director Daryl Cloran.

Hungry to create, determined to stay visible and eager to satisfy Christmas Carol diehards, Cloran has followed Alberta Health Services' contagion-reduction strategy and produced a first-time film adaptation of the popular holiday tradition. It will be streamed from Dec. 15 to 31.

In 2019, Citadel Theatre debuted playwright David van Belle’s re-imagining of this 19th-century tale. The playwright retained Charles Dickens' outrage at the way people in slums were treated. But he changed the location to a large cosmopolitan city, possibly New York, during the 1940s or 1950s. It was an unqualified hit.

The plot follows the same trajectory. However, in this version, Scrooge operates Marley’s Department Store. He lives in an apartment above the store and his overworked and underpaid assistant, Mrs. Cratchit, is a widow raising six children.

Originally mounted on the Maclab Theatre stage, about 30 actors danced and sang boisterous Christmas songs from the bygone era. Since safety and social distancing are now the primers, limits to onstage singing demanded the theatre company swiftly shift gears.

“We couldn’t do a live theatre show. The amount of people crammed into one space was pretty full. Instead, we approached it as television scenes. We would call in a small group, scene by scene,” Cloran said.

Together with van Belle, the duo edited the script from two hours to 90 minutes, cutting several songs and less significant lines.

“We kept the beauty and the heart of the play while making it work for the new format. Fortunately, we were able to do a full production last year and that made it easier to edit,” said van Belle.

Cloran hired Apocalypse Productions and Bhatt Productions for film work. Through two weeks of filming, five videographers with three cameras and a full cast working in cohorts took over The Rice, a small black-box theatre, turning it into the equivalent of a television studio.

“We had all the props, sets and costumes. It’s just the footprint was smaller. For instance, the Fezziwig Christmas party – last year, we had 30 actors. This year, we cut it down to 18. But it still felt full,” Cloran noted.

All the old holiday chestnuts such as White Christmas were prerecorded individually in booths and lip-synched for the camera. Although canned music lacks the electric energy of a live performance, there were tradeoffs Cloran explains.

In one song, actor John Ullyatt (Ghost of Christmas Present/Santa) would normally sing with a choir of nine singers.

“We couldn’t do it live, but we wanted him to sing and dance. He sings with the group, but the choir was recorded singing individually. Using a Zoom box model, we can see them all.”

He added film allows close-ups and moments of intense emotion that are impossible to create in theatre. He applauded former St. Albert actor Ted Dykstra’s interpretation of Scrooge as transformational.

“Scrooge is the same character he created last year. But he takes Scrooge to a new level. It speaks not only to Ted’s real skill as a theatre and film actor. But in this performance, he is able to speak volumes on film in a way he couldn’t do on stage. He did it really well. A lot of the crew and I, after one take, said: ‘Wow.’"

As the days inch closer to the film’s online premiere, van Belle asks viewers to take Dickens’ message to heart.

“It is a call to all of us to be generous and caring at this time of year. This is a profound message. Dickens was adamant about it then and it feels more acute than ever this year.”

A streaming pass is $40 plus fees and GST for unlimited viewing time during a 24-hour span. The video will be streamed on BroadwayOnDemand, a digital theatre platform and tickets are available exclusively through the Citadel at citadeltheatre.com.