The poet's got style 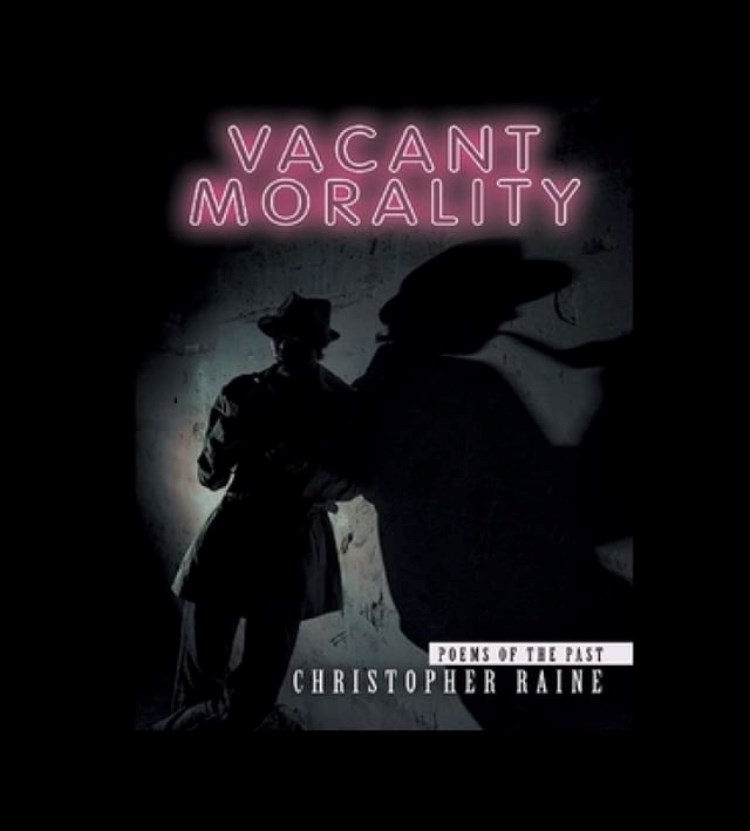 Vacant Morality: Poems of the Past

Copies of Vacant Morality will be available for purchase

Christopher Raine wants to inject a little bit of the good old days into the brave new world, and he’s got the rhyme scheme to pull it off.

The author has just published Vacant Morality, his new book of poetry, and it’s a trip through the stylistic territory that was once inhabited by his diverse literary heroes T.S. Eliot and Charles Bukowski among others. Perhaps that is a big part of why the writing comes across as melancholy, reflective and yes, just a bit serious. Even the author himself suggests that people might think of it as “dark poetry.”

“I write a lot about love and regret. I write about things that I think are relevant – economic injustice, the homeless – and try to approach them in a way that’s honest and human,” he said. “I talk about life. It’s not always pretty but there is redemption. Sometimes a memory is something worth holding on to.”

Raine is a lifelong writer with short stories and novellas aplenty in his leather briefcase. Poetry is a different kind of bird to him: it needs special care before letting it out into the world. A large part of that, he explained, is making sure you’re the right person to care for it.

“I think that when you’re writing poetry, you have to have the ability to take a hard look at yourself. There’s a lot of introspection and honesty that you have to bring forward. It’s not just something you throw off the top of your head. It takes a lot of honesty and that’s hard to do.”

Confronting himself meant that he also had to take a hard, long look at his relationship with writing. He studied literary theory and criticism in university so many years ago, but the experience left a bad taste in his mouth. He remained a prodigious writer ever since then but preferred to keep his work to himself. This privacy also led him to throw out hundreds of poems.

Only recently has he decided to get back out there, with some readings and critiques in a small circle of like-minded writers. This collection then is the culmination of a long gestation and purification.

Raine compares it more to the aging of a fine wine.

“This stuff has been bottled up for years.”

Just like that wine, this stuff needs to be sipped on, savoured and with every nuance appreciated. Raine wants the reader to feel immersed in a film noir setting right down to the bluesy soundtrack. He writes in a way that makes you love the style just as much as he does.

“It’s also a return to – and this is fundamental – the language,” he said, referring to the works of such writers as J.D. Salinger who was formative to his own development.

“I found that in their writing there was a certain sense of style, of language, of character that we don’t see in a lot of modern works. We’ve become so casual all the time in our dress, in our speech, colloquialisms, even music today. They don’t seem to have the same kind of introspection. The songs don’t have the story. There’s just a lot missing for me.  I just wanted to bring that style back. I don’t want to think that modern poetry is bad; it’s just different. I have some nostalgia for Robert Frost.”

More information on the author and a preview of the book can be found at www.rainereflections.com.