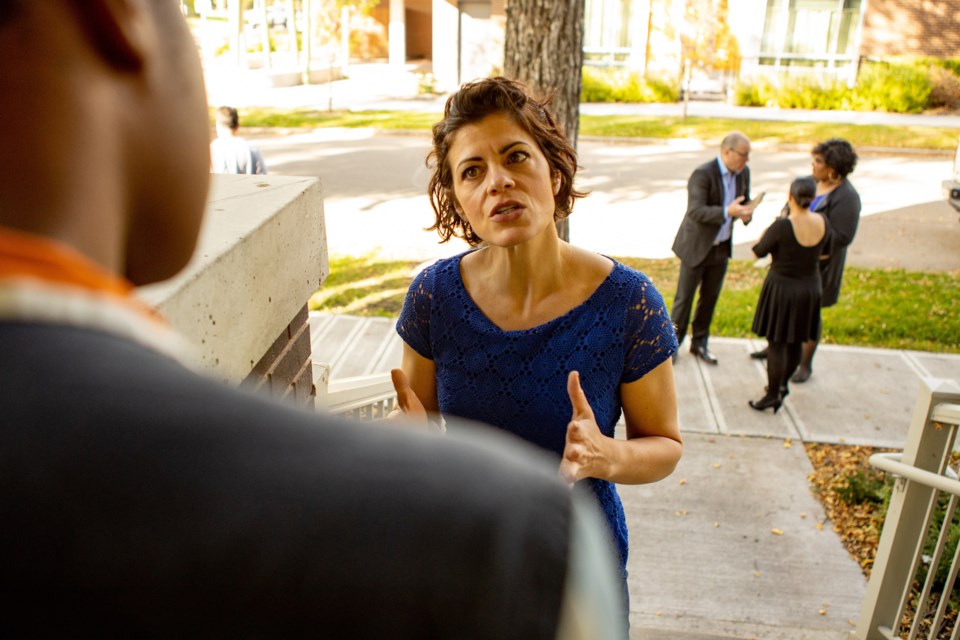 Candace Berlinguette takes a run as an NDP candidate trying to convince voters to vote for her in Serial Collective's new production of E-Day running until Oct. 27 at Theatre Network's Roxy on Gateway. DBPHOTOGRAPHICS.CA/Photo

Tickets: $18 to $26 plus applicable fees. Visit tixonthesquare.ca or [email protected]

Canadian politics are big news. As our federal election looms with no consensus on the best prime ministerial candidate, there’s a sense of uncertainty sweeping the country.

E-Day, a Serial Collective production that premiered Thursday as part of Theatre Network’s Roxy Series, is a brilliantly conceived political comedy that gives a behind-the-scenes view of a pressure-cooker campaign.

Playwright Jason Chinn volunteered during the campaign that swept Rachel Notley’s NDP into power with a landslide majority in the historic 2015 provincial election, and his perspective is illuminating to say the least.

Instead of focusing on the leaders, Chinn shines a spotlight on dedicated blue collar workers, students, immigrants and general people who dedicated their time and resources to stump for change without being assured of success.

It’s this grassroots community, with all its bickering, bull-headed stubbornness, flippant humour and full-throttle tenacity that creates universal appeal.

Tensions kick into high gear when the well-funded conservative party parachutes a notable candidate in the race at the last minute. The pressure is on for the NDP underdog campaigners, one so intense it puts a strain on relationships and threatens their hard work.

Director Dave Horak stages the cast of 12 in a theatre of the round. He’s attracted many adroit veterans such as Candace Berlinguette, April Banigan, Lora Brovold, Sheldon Elter, Beth Graham and Linda Grass.

As in any political office, the mix is complete with newcomers Asia Bowman, Sue Goberdhan, Shingai David Madawo, Kiana Woo and Amena Shehab. And interestingly, Chinn has the actors using their real names for the character roles.

Candace is the starring candidate, a teacher who ran in the previous election after seeing children come to class without a lunch or a winter coat. Unfortunately her original passion and fear of losing a second election morphs into hysteria when the conservative adversary sets up shop across the street from her office. It’s a delicate role and Berlinguette skilfully handles the emotional transitions.

Keeping Candace focused and on point is Sheldon, her best friend and campaign manager. But while he completely immerses himself in the campaign, his marriage suffers a breakdown.

In some ways, this play is more Sheldon’s transformation than Candace’s. Elter is onstage for the majority of scenes. As the play’s linchpin holding the structure together, he delivers a highly charismatic, energetic performance.

Beth Graham steals several scenes as Candace’s wacky friend who turns everything she touches into a disaster. As a walking punch line who nails every scene, Graham is at the top of her game.

Linda Grass is the environmentally conscious guru imported from Vancouver as the election day co-coordinator while Asia Bowman and Shingai David Madawo are two student phone canvassers that develop a crush on each other.

There’s a great deal of heavy subject matter, but Horak keeps the tone light and hilarious. Whether you’re a news junkie or the person on the street looking for an uplifting few hours from our current depressing political situation, E-Day is the best antidote I’ve come across.