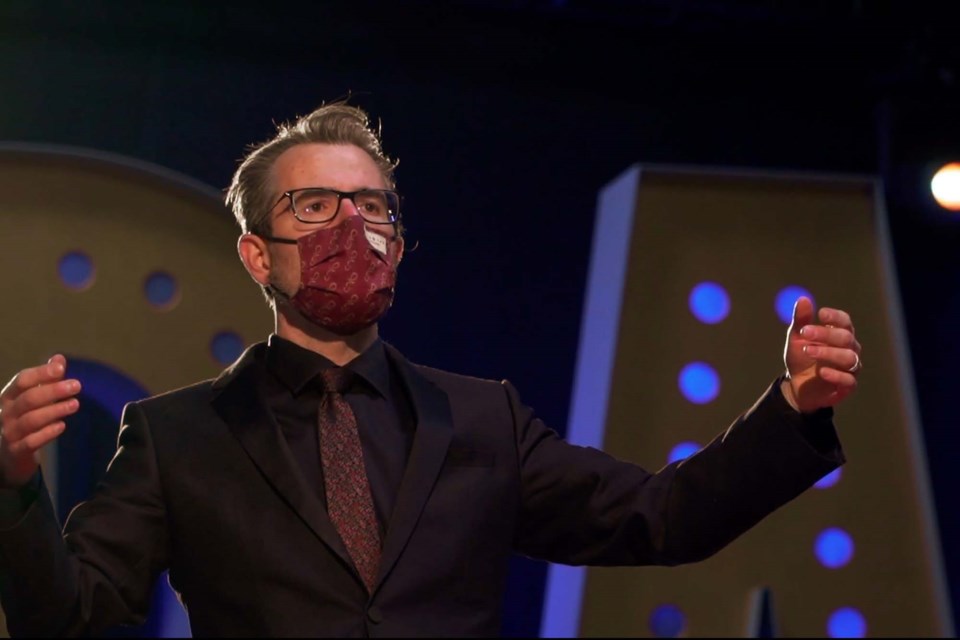 Pro Coro Canada music director Michael Zaugg is pictured leading the choir during a 2020 virtual concert. He will once again lead the choir during the Good Friday concert filmed from Augustana Campus.

The region lost more than just music during this past year. Music enthusiasts lost that special enrichment and psychological well-being that grows out of enjoying a shared activity.

Normally performed at the prestigious Winspear Centre, this year’s repertoire will be live streamed on Friday, April 2, from Augustana Campus’ Faith and Life Chapel in Camrose. There will be no in-person audience at the chapel.

Instead of a 30-singer choir usually featured in this wellspring of sacred classical music, numbers have been whittled down to 12 due to pandemic restrictions. The smaller choir also includes St. Albert bass vocalist Michael Kurschat.

For many viewers, this 70-minute concert is an important aspect of their personal faith. Recognizing this, musical director Michael Zaugg focuses on numerous short selections from the Passion of Christ.

The first performance is of Pablo Casals’ O vos omnes originally dedicated to Montserrat Abbey in Catalonia where it was first performed. This a cappella work for mixed choir is a haunting, sorrowful depiction of Christ on the cross. Casals asks Christians to ponder whether there is any sorrow bigger than Christ on the cross, Zaugg said.

Following is the Canadian premiere of Stephanie Martin’s Tenebrae Responsories for Maundy Thursday, a four-part work for unaccompanied choir.

“It is a series of responses. It is Christ’s journey from Palm Sunday to Thursday. Christ arrives in the city and palms are spread on the road. He gathers his disciplines for the last supper and it includes the story of Judas’ betrayal and his going to death. It is the darkness of the world when Christ is crucified.”

Polish composer Pawel Lukaszewksi’s penitential Tenebrae is also celebrated with a chant-like flow that is gently spiced with dissonance.

“The mother sees her child crucified and suffers the pain of a parent. She looks at her child and is not able to help.”

Antonio Lotti’s greatest legacy to sacred music is the widely known Crucifixus. In Crucifixus, the 18th century Venetian composer depicts Christ’s suffering in descending lines as voices plummet to the depth of their vocal range and end in silence.

Two pieces concluding the concert with a sense of healing are G. F. Handel’s And With His Stripes from Messiah as well as R. E. Perrin’s It is Finished.

“It is Finished is a short hymn. It has beautiful text and it looks skyward. The mother has departed, but the tomb is waiting. It’s a song about the passion, but at the end it leads to resurrection."

Riverfort Productions, a company that has filmed many of the streaming downloads on Pro Coro Canada’s website, will once again set up equipment with four cameras.

“It’s a very different environment,” laughed Zaugg. “We have four cameras, two people on a switchboard and no audience. And we have to mic the entire team.”

Whether one is a devout Christian or simply an aficionado of good music, Zaugg encourages people to visit the Pro Coro TV on Good Friday. The concert starts at 7:30 p.m. Tickets are $15 per household and are available online at https://tv.procoro.ca/en/c/good-friday-with-pro-coro-canada.330.

“From our experience, we recommend you get ready ahead of time and set up your device. Get your system set up and make sure it works. We do have tech support and people can phone or send an email."