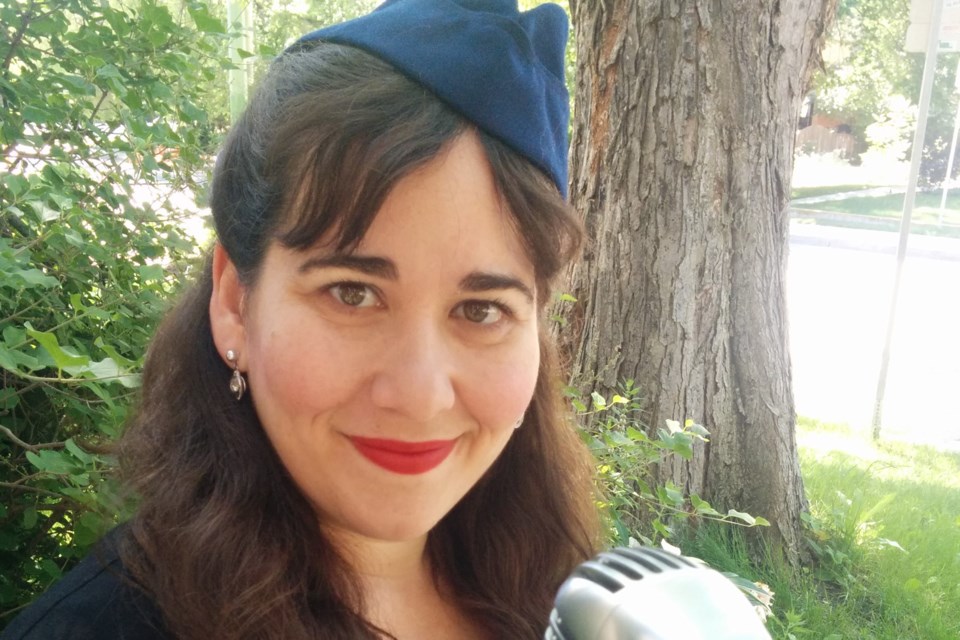 Dame Vera Lynn, the endearingly popular British singer nicknamed the “Forces Sweetheart” died in June 2020 at her home in East Sussex. The centenarian was 103.

Lynn serenaded the troops with her sweet, lush voice during the Second World War and boosted morale in a way no one else could. Despite the terror of daily bombings, she got crowds singing, smiling and crying with romantic ballads such as We’ll Meet Again and The White Cliffs of Dover.

During the COVID-19 pandemic, Lynn’s songs continue to be celebrated on both sides of the Atlantic Ocean. St. Albert-raised soprano Melanie Gall, a long-time fan of this wartime celebrity, reprises her role as the British icon in a one-woman cabaret.

“It’s a love letter to Vera Lynn, something I meant to send her and never did. It’s a fan letter where I want to tell people about her wonderful life and the influence she had on soldiers and the public,” said Gall.

In the last decade, the New York-based soprano, became a true globetrotter, taking her music wherever people requested. When the COVID-19 pandemic struck in March, she was returning from a six-month tour in Australia on her way to perform in India, Nepal, Abu Dhabi and eventually London, England.

As borders slammed shut around the world, the soprano attempted to return to the United States only to discover the border was closed to Canadians. Family and friends in St. Albert, however, received her with open arms.

In the last five months, Gall has cleaned out her mother’s basement, babysat for her sister and written a book about Deanna Durbin, a Winnipeg-born actress/singer who rose to Hollywood stardom in the late ‘30s and early '40s. But just as the star's career peaked, she retired at 29, married and moved to a farm outside Paris.

Although Gall has not yet obtained a literary agent for her Durbin book, she has a few cards tucked up her sleeve.

“At the time of the cabaret, a couple of publishers gave me their cards and I’m hoping they can help with the book,” Gall said.

This is her second run at writing a book. About 20 years ago, the author wrote Europe: A Savvy Girl’s Guide. The travel guide, although not hugely lucrative, earned enough money to pay for grad school at Manhattan School of Music.

In the meantime, Gall, who exhibits Lynn’s down-to-earth, girl-next-door appeal, is once more eager to entertain a crowd. Not only did Lynn’s songs galvanize military troops, they also gave hope to millions in Britain during the Corona virus pandemic.

“Vera Lynn always felt a connection to her fans. She embraced them and I hope to bring something of that to the concert.

We’ll Meet Again: Vera Lynn, the Forces’ Sweetheart takes place this Sunday at 2 p.m. at 16521-107 Ave. This is a pay-what-you-can concert. Parking is free and there is room to social distance. Bring your own lawn chairs.