In this new wave of virtual festivals, the Street Performers Festival has pitched a tent that not only covers performances, but also teaches new skills through a series of online workshops.
Jul 1, 2020 12:00 PM By: Anna Borowiecki 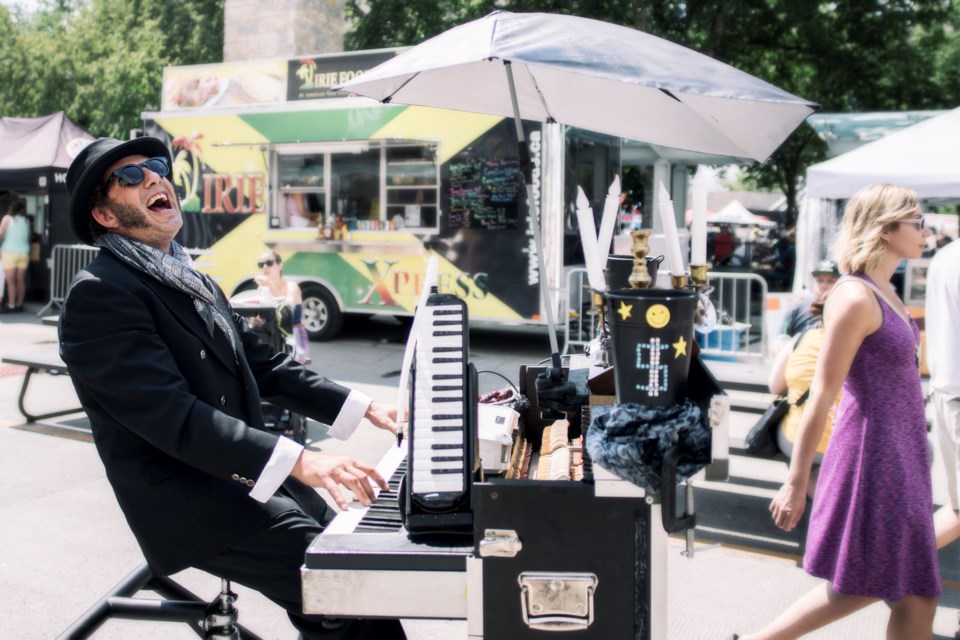 COVID-19 has hamstrung a great many leisure activities and watching television reruns can become boring after a month or two.

So we’ve rounded up the traditional antidote for the blues – a hefty dose of laughter.

The 36th year of Edmonton International Street Performers Festival is going digital this summer from July 3 to 12.

Generally, the street fest is an environment where both new and established artists meet each other and share stories, tips and tricks. This year, rubbing elbows will be out of the question.

Of course, nothing can quite replace the al fresco appeal of an energized crowd watching daring stunts and tossing coins in a hat while chowing down on savoury street food.

But in this new wave of virtual festivals, the Street Performers Festival has pitched a tent that not only covers performances, but also teaches new skills through a series of online workshops.

“The festival has always been about connection and the best way to connect is to get that energy and enthusiasm into your house,” said executive director Shelley Switzer.

All you need to join the party is a web browser. Once on the website, the party is divided into three zones. There’s the Troupe Zone, the [email protected] Zone and the Share Zone.

The Troupe Zone is an impressive lineup of about 28 street performers that have performed at the festival in previous years. The festival videographer dug up archival footage of performers’ past exploits, a visual treat that will be well worth tuning in.

Viewers can expect to see a broad spectrum of street performers from the cheeky East Indian magician Jaardu and Amanda Panda, the hoola hoop girl, to the whip-cracking Tianna the Traveller and the Street Circus acrobats.

The [email protected] Zone illustrates a promising range of six different workshops and offers an option to pick up new skills at juggling, hoola hoop lessons, magic tricks and clowning.

Finally, the interactive Share Zone gives festival fans an opportunity to upload videos, send in photos or pass on a favourite event story.

“You can send in a video of you doing a dance or you can post a mashup of things, or send in memories or experiences,” Switzer said.

When organizers initially cancelled the live fest in early April, there was some question as to whether a digital version would appear.

“At that time within 48 hours, 99.9 per cent of artists around the globe lost work. Four months of work disappeared and there was no mention of when they could gather again,” Switzer said.

In an effort to put cash in artists’ pockets, organizers pulled out all the stops to create an online format. Normally artists pass the hat after a performance. In view of the different format, Switzer stated all artists are paid through the festival budget.

The festival is free to viewers, but donations are gratefully accepted to cover expenses including artist fees. Any donation more than $25 receives a tax receipt.

The festival can be viewed at edmontonstreetfest.com.