Take flight with Symphony Under the Sky 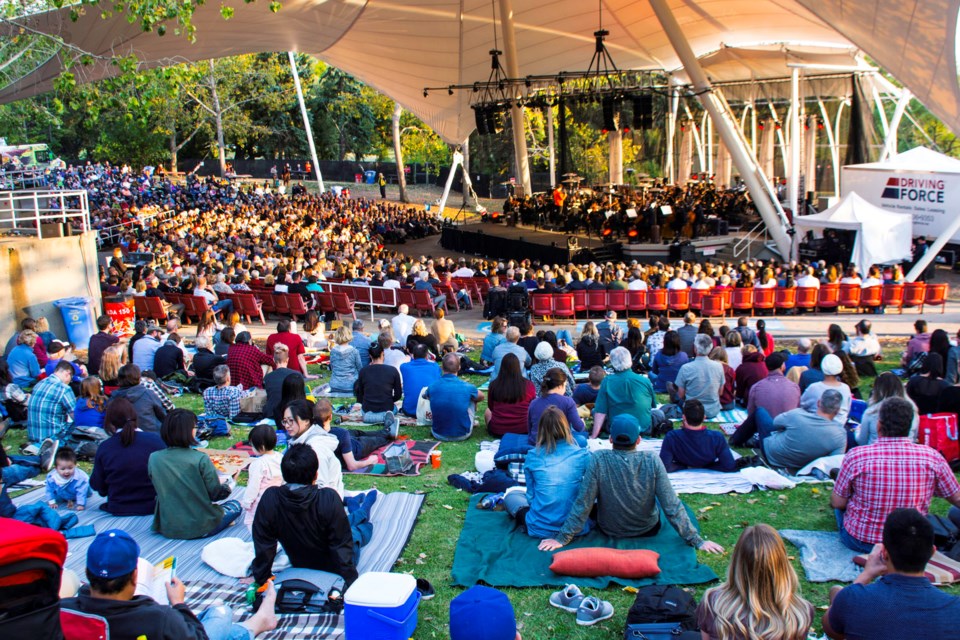 An event for all ages, Symphony Under the Sky takes place Aug. 29 to Sept. 2 at the Hawrelak Park outdoor amphitheatre.

Symphony Under the Sky Concerts

Squirrels scamper across the stage. Geese flap their wings while flying overhead. Wind rustles through the trees.

Once again nature and music collide during the perennially popular Symphony Under the Sky held this coming Labour Day weekend at Hawrelak Park.

Performed by the Edmonton Symphony Orchestra and its special guests, this five-day affair has a widespread reputation for creating fun, informal concert experiences.

And it certainly doesn’t hurt that the 56 symphony musicians are world class and that conductor Robert Bernhardt has a special affection for the material he chooses.

Traditionally four sunset concerts are held annually from Thursday to Sunday. This year, organizers have increased the performances to five.

Due to the high volume of requests, a second performance of the sold-out Saturday night Hollywood Hits is booked for Monday afternoon.

Symphony Under the Sky launches Thursday night with its personality concert. This year’s featured guest is Eileen Ivers, a Bronx-raised daughter of Irish immigrants who grew up to electrify audiences across the world with her Celtic fiddle.

Familiar to area audiences, the Grammy award winning fiddler has performed twice with ESO during a pop series and a Christmas concert.

“She has a strong following and we know it will be an explosive evening. What she does with Celtic music is amazing. When you hear it, it builds and builds and builds and there is nothing for an audience to do but jump up and scream. She slayed everyone,” said Rob McAlear, ESO artistic administrator describing her last visit.

With recording credits of more than 80 traditional and contemporary albums and movie scores, the nine-time fiddle champion plays a mixed bag of tunes. While she delivers a folksy feel, there is always a big push for power in her style.

The evening starts with Dvorák’s Symphony No. 9, a classical work inspired by Native American music and African American spirituals. It is Dvorák’s most popular work as witnessed by astronaut Neil Armstrong who took a tape recording on the Apollo 11 mission Moon landing in 1969.

“This is one huge orchestral piece,” McAlear noted.

The program’s second half is Brahm’s Concerto in D major featuring soloist Blake Pouliot. A Canadian emerging violinist, Pouliot has performed with major symphonies across North America. He is a student at Los Angeles’ prestigious Colburn School and is enjoying a return engagement with the ESO.

“He’s a young rising star and he performs beautifully."

Saturday night and Monday afternoon introduce the lighter Hollywood Hits, a repertoire that is fun for the orchestra to play and enjoyable for crowds to hear.

Bernhardt has also programmed music from Disney favourites such as The Avengers, Ghostbusters, Mamma Mia!, Toy Story and Frozen.

Both Tyler Hamilton and Ariana Whitlow, regular symphony vocalists, are back singing solos and duets.

“They’ve worked together before. They do such a terrific job. Both have terrific voices that blend really well and they’re both extremely charismatic. They’re both experienced stage animals and they’re both local. There is no need to import people from out of town, when you have talent in town,” said McAlear.

Speaking of backyard talent, St. Albert’s Neda Yamach, a first violinist with the ESO, will perform as featured soloist in Chairman’s Wall from the movie Memories of a Geisha.

“These are strong arrangements and the orchestra gets to strut its stuff. This is music that provokes people to dance.”