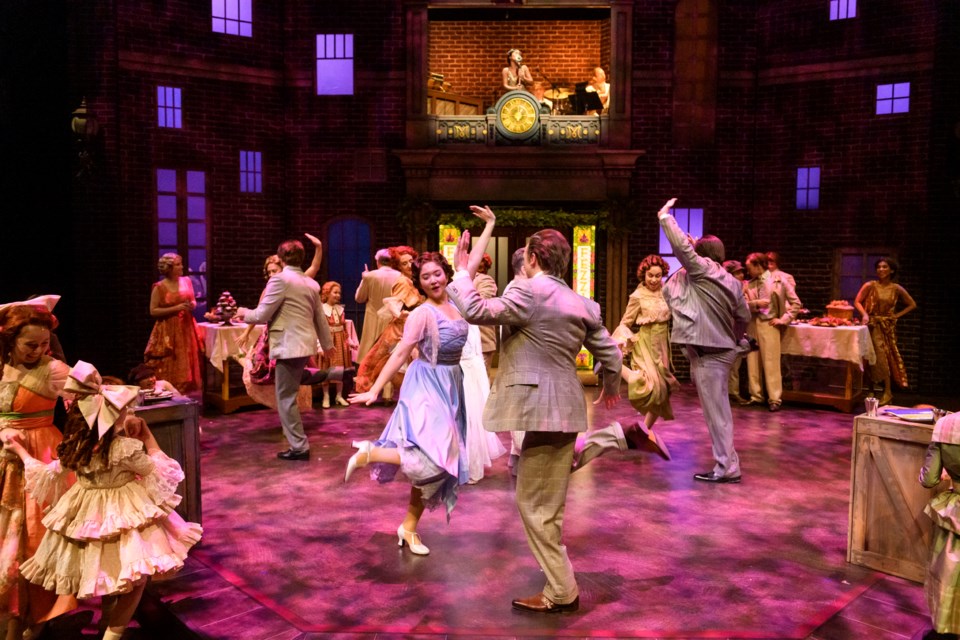 Some 176 years after Charles Dickens penned his outrage at the way children in slums were treated, playwright David van Belle reimagines A Christmas Carol for a new era.

For the past year, van Belle worked closely with Daryl Cloran, Citadel Theatre’s artistic director. The duo changed the location to a large cosmopolitan city, possibly New York during the 1940s or 1950s.

The plot is essentially the same. However, in this version, Ebenezer Scrooge operates Marley’s Department Store, a shopper’s paradise similar to Macy’s or Gimbel’s.

Also in the redesign, Scrooge lives in an apartment above the store, and his overworked and underpaid assistant is Mrs. Cratchit, a widowed mother raising six children singlehandedly.

“Darryl and I talked for two and one-half years about the new version. I pitched five different versions from an 1840s one to one set in contemporary Edmonton with 12 people standing in the cold at a transit shelter who decide to act out A Christmas Carol. Thank God he chose this one,” laughed van Belle.

Renowned Canadian actor/pianist/director Ted Dykstra heard about the transformation and pitched the idea of playing Scrooge.

“There’s something about the idea of redemption and second chances. I was drawn to the story after seeing it in black and white television with Alistair Sims when I was younger. It’s my favourite Christmas story. It’s a love story of change and anyone can change with a little bit of grace,” said Dykstra.

The St. Albert-raised actor first appeared in the 1979 Citadel Theatre production Cause Célèbre, directed by then-artistic director Peter Coe. Dykstra was 18 at the time. Since then, he’s created and performed several blazing successes at the Citadel, including Two Pianos Four Hands and Fire.

van Belle believes Dykstra is the right actor to carry the role.

“Ted is very diligent. I watch him do his work and it’s interesting to see him find his own path. He’s not one to fake a moment. He has to find it, van Belle says.

Scrooge isn’t just a skinflint. He’s quite nasty to the point of expressing cruelty to the most vulnerable. And Dykstra has dug deep to understand his character’s personality.

“So many bad people are not what they seem to be, and they aren’t aware of it. Their behaviour is almost an animal instinct to protect themselves. Most people that are rotten to the core are quite scared and hurt. If they don’t want to be hurt, they close off people,” Dykstra said.

Tackling a centuries-old story in a novel, cutting-edge version is daunting to any actor. However, Dykstra has honed a portable toolkit of talents over the last 35 years that power any challenge.

“The mantle being put on my shoulders is a big one. I have a great responsibility. It’s not lightly entered into. It’s time for a change. Change can be painful and exhilarating. Some people will miss Tom’s version. Some will want to try it again and see where it is now.”

While the plot remains true to Dickens, the production's main differences are more contemporary sets, costumes and basic design. Although not a musical, the show features 12 radio-friendly Christmas carols from the era, such as I’ll Be Home for Christmas.

“This is a new version, and at this time of year we need a new light,” said van Belle. “It’s a classic story. The heart remains the same. The heart beats the same."