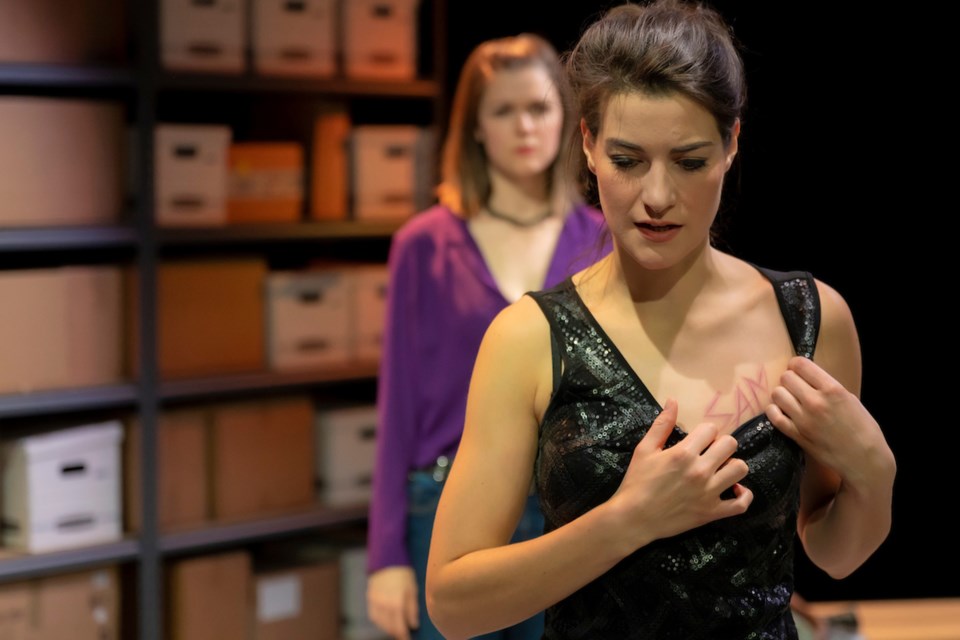 The Ballad of Peachtree Rose

Most people dream about winning a lottery. Peach instead dreams of a two-storey house with a wrap-around deck peopled by five kids, cats, dogs and a fluffy kitten.

But Peach (Alex Dawkins) is an abandoned, friendless street kid living a low-level existence where survival depends on a successful break and enter for a quick cash grab.

In Nicole Moeller’s suspenseful new mystery, The Ballad of Peachtree Rose, running at Backstage Theatre until Nov. 10, Peach is one of the forgotten, one of those unfortunates who falls through the cracks.

With such a profound desire to be cocooned in warm family love, it’s not surprising that when the tattered Peach meets Max (Laura Raboud), an enigmatic executive who offers her a job and new start in life, she falls under the woman’s spell.

The well-dressed Max is brisk, efficient, commanding and every inch an alpha. She demands complete honesty, loyalty and integrity, yet her own secretiveness violates the three-word mantra.

To her credit, Moeller tackles the justice system and crafts an elegant mystery with unexpected twists and turns. What begins in darkness is gradually lit scene by scene as we the audience play detective and attempt to follow clues and red herrings.

Not only does Max give Peach a well-paying job keeping track of boxes, she also buys the younger woman clothes, takes her protégée to fancy parties and finds her an apartment.

Battered by life, Peach needs to hear positive encouragement. Her father blew his brains out in front of her, and her mother, strung out on drugs, barely recognizes her daughter.

I was really drawn to Dawkins' rendering of Peach, a young 20-something woman who should happily be planning her future. Instead she is lonely, unwanted, angry, aggressive and at times desperately vulnerable. Dawkins releases her character’s bursts of emotion in the right measures and seamlessly draws us into her no-win world.

Raboud’s Max is the ultimate enigmatic character, but everything she does is shady and her cross-country criminal connections spell trouble. Raboud plays her character as a closed book. It is only at the end we see her true nature.

Floating throughout the 90-minute production is Belle (Bobbi Goddard), a victim mourning her mother’s murder and seeking justice for the violent crime. Belle’s role as the victim is underwritten. Goddard's few scenes are unsuccessful at painting her pain and obssession with finding justice. Perhaps a slightly expanded role would provide a greater counterweight to how victims cope with senseless violence.

The fourth cast member is Shannon Blanchet, a consummate actress who skilfully stickhandles various roles from a perky Avon lady and Sylvie, a dishonest punk, to a stone-hearted crime boss and a by-the-book police officer.

Director Brenley Charkow keeps the production moving at a full-throttle speed, at times a bit fast to absorb all the information. Interestingly, Moeller’s ending can be interpreted in several ways. Who tells the truth? Who lies? You decide.