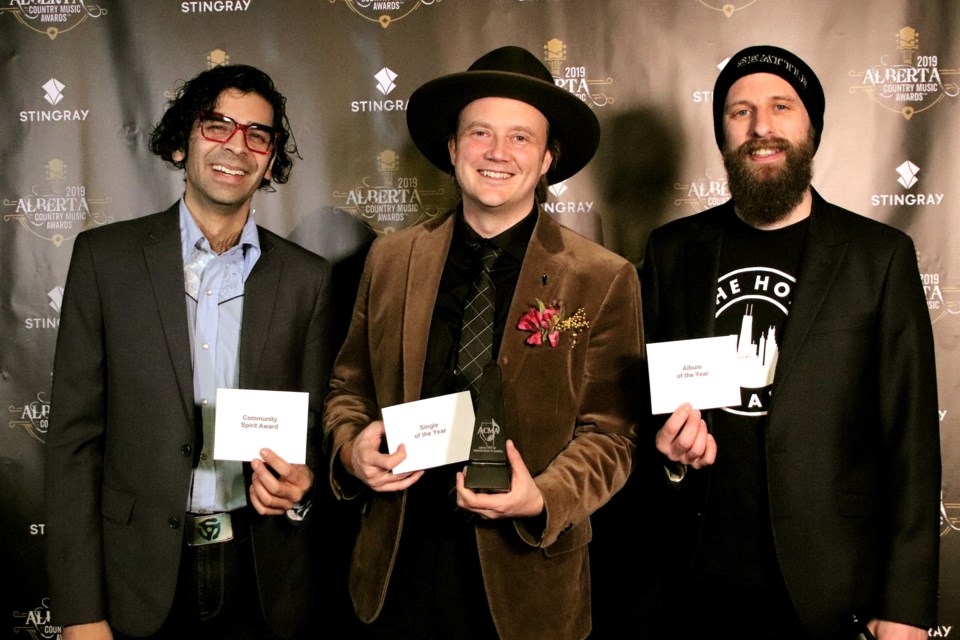 Longtime favourites of the local music scene, The Dungarees were big winners at the Alberta Country Music Awards taking home Album of the Year, Single of the Year and Community Spirit. From left to right St. Albert's Kiron Jhass, James Murdoch and Ben Shillabeer. BILL BORGWARDT/Photo

It was one of the province’s biggest nights for country artists – the ninth annual Alberta Country Music Awards.

The movers and shakes of Alberta’s country music industry met at Cambridge Red Deer Hotel on Jan. 26 to cap off a weekend of seminars, workshops and performances. Country-pop singer Jess Moskaluke, a CCMA and Juno Award winner, hosted the ceremonies.

St. Albert, a city that punches more than its weight in musical talent, was well represented by various singer-songwriters.

St. Albert’s Hailey Benedict received the Horizon Youth Award while The Dungarees made a clean sweep of three major awards. They netted Album of the Year and Single of the Year for Twenty Something as well as Community Spirit Award.

This is the third consecutive year the gritty fivesome has won at least one award.

“We went there not expecting a lot. This year there’s been so much incredible music made and there’s a ton of great talent out there,” said Dungaree musician Kiron Jhass, who appeared with James Murdoch and Ben Shillabeer.

Their first big win was Album of the Year right at ceremony's opening.

“After that, we thought, 'We got one and now we can relax and enjoy our evening,'” said Jhass, a St. Albert resident.

Almost immediately, the inaugural Community Spirit Award was called out and the Dungarees returned to the stage to accept the hardware.

“This is a special one for us. We did three fundraisers for the cancer foundation. That was special to our hearts. Everybody has somebody they know who has had cancer,” said Jhass, who by day is a nurse at Cross Cancer Institute.

Single of the Year was the last award handed out.

“We were very proud of that. But it was absolutely funny. James does most of the speaking for our group, but when he got up there, he was just speechless.”

Next on the agenda, the blue-jean clad musicians are booking a second tour of Australia and a new video of their single, They Don’t Make ’Em Like They Used To is ready for release. Shot in the Arizona desert, the video is a nostalgic nod to the past.

Showing off a dose of contemporary girl power, Paul Kane student Hailey Benedict, scooped up the Horizon Award that recognizes rising stars under the age of 18. In 2014, Benedict was also the youngest recipient to receive the Fan Favourite Award.

“It was such an honour and I’m so grateful to have received the award. What is so cool is to be there with friends or people I know personally. They are all inspiring,” said Benedict.

“It was a way we could come together and build each other up.”