Free Will Shakespeare Festival and Thou Art Here forge an alliance
Aug 22, 2020 9:00 AM By: Anna Borowiecki 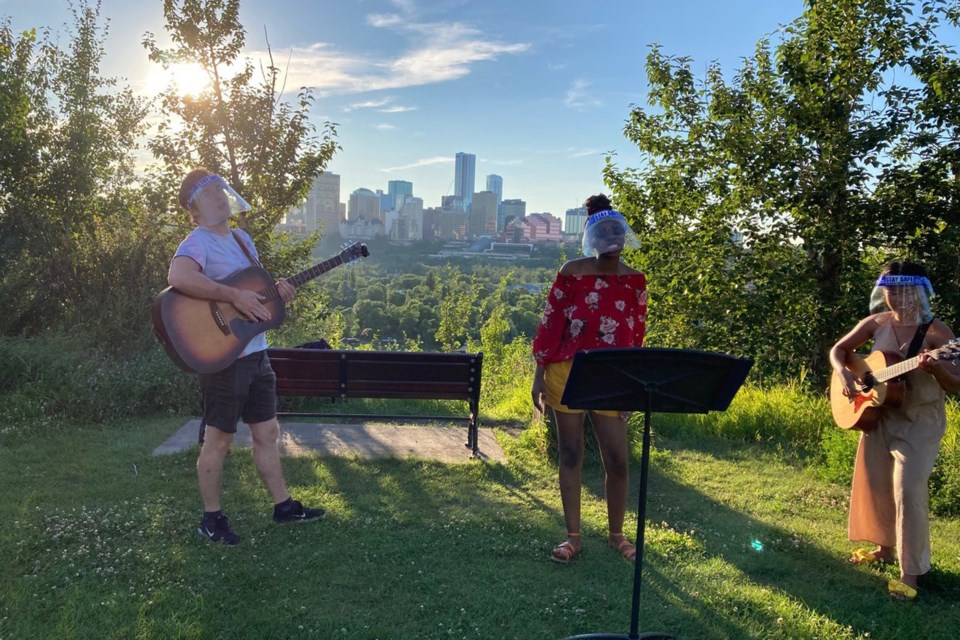 The Free Willies, from left to right, Billy Brown, Jamella McNeil and Chariz Faulmino, perform at pop-up sites until Aug. 30. Follow The Free Will Shakespeare Festival and Thou Art Here media feeds for locations and times.

As with many entertainment events, the Free Will Shakespeare Festival was kiboshed due to the COVID-19 pandemic.

However, the upside-down turn of events inspired newly minted artistic director Dave Horak to develop a contemporary solution that harkens back to Shakespeare’s day.

The festival has banded together with Thou Art Here, a local independent theatre company that shows up in unexpected locations to recite William Shakespeare’s plays.

Together, the two companies created The Free Willies, a local mix of three actor/musicians who will pop up at surprise locations – parks, farmers’ markets, front porches, anywhere – performing a blend of music, comedy and, of course, some Shakespeare.

“We’re popping up and not making big pre-show announcements, in part because we don’t want to draw big crowds because of COVID. We’ll be doing 20-minute family friendly performances, and just prior to the show we’ll be posting the location on social media,” said Horak.

“We love Shakespeare. We love performing. But most of all, we want to keep things safe for everyone.”

But by June when he officially took the reins, virtually every entertainment venue in the region had temporarily turned off their stage lights.

“We had a chunk of funding for puppet shows that were normally done before the main show,” Horak said. “At first, we were going to take material from the puppet show and create online material.”

Since Thou Art Here reached out, the two companies opted to create a live busking performance as a throwback nod to traveling troubadour shows.

“Jameela is a powerhouse singer who was a vocalist in the Citadel production, A Color Purple, and Chariz did Alberta Opera touring shows. She has a good connection working with kids.”

“I’m hoping to fill our dance card by then.”

Follow The Free Willies through the Free Will Shakespeare Festival and Thou Art Here media feeds.