The Great Balanzo shares a laugh 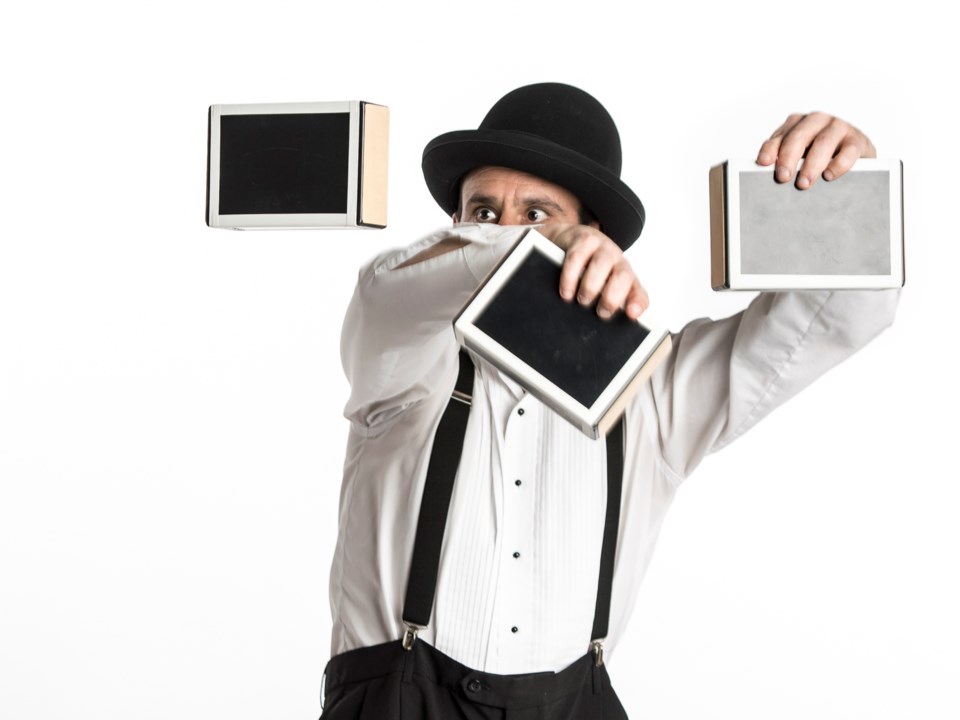 The Great Balanzo takes his act to the next level with some energetic cigar box juggling. MARC J. CHALIFOUX PHOTOGRAPHY/Photo;

The Great Balanzo in Concert

As The Great Balanzo, Aytahn Ross is a one-of-kind Charlie Chaplin-esque street performer renowned for his moustache, bowler hat and stretchy suspenders.

As a clown and magician, his indoor circus act is adorned with curious objects that prompt children to giggle in wide-eyed amazement.

Ross has lived in Edmonton for eight years and most local crowds have seen his trunk of tricks such as juggling, plate spinning and delicate feats of balance.

But at his debut performance on the Arden Theatre stage Sunday, Feb. 9, The Great Balanzo will present a few new sleight-of-hand tricks laced with fumbling comedic moves.

“In one piece I have a giant balloon six feet in diameter. I pop in and I pop out. Regardless what happens, it’s a fun, silly thing from start to finish,” said Ross.

While some audience members may have witnessed his disappearing cracker trick, the circus performer is upping the magic by levitating a ball.

There may not be flaming torches or knife throwing, but The Great Balanzo will be stacking human Jenga blocks, juggling hats and demonstrating a ping-pong ball routine he performed for former Governor-General Michaëlle Jean.

“As the title of the show suggests, The Great Balanzo in Concert, there will be some live music in the show for the first time ever. And the music will be performed by a very special impromptu orchestra,” he added.

“My first memory was at the Winnipeg Folk Festival. I was a little kid and I was tired and bored of listening to guitars and banjos. In one corner there was a fellow with a funny hat playing with different objects and juggling. I was hooked.”

A self-taught juggler, Ross would later volunteer at children’s festivals and teach others to master juggling coordination.

In addition, his mother enrolled him at the Manitoba Theatre for Young People.

“Hockey was too expensive. And I had nice teeth and my mother didn’t want them to get broken. So it was the arts and theatre.”

After high school, Ross returned to Montreal and graduated from Concordia University with a Bachelor’s degree in arts.

“I had no job prospects, but I realized I already could do something wonderful, but it took a few years to commit to. Once you commit, you have to take responsibility.”

In building the character of The Great Balanzo, Ross would always joke he refused to wear face makeup and fake tights.

“It was not my style. I was more of an elegant vaudeville style.”

It worked. In addition to repeat invitations to Montreal’s famous Just For Laughs Comedy Festival, he toured 13 countries performing for hundreds of thousands of children.

But a decade ago, things began to shift.

“My community of friends in Montreal was dwindling. Some were moving for jobs. Some were involved in life changes. I also started seeing someone in Edmonton. It was time for a change, and I fell in love with the city more quickly than I thought.”

Once Ross moved west, he was in high demand as the only professional bilingual juggler in the province.

“In Montreal everyone and their dog is a performer. Here I was a novelty.”

So what makes Balanzo so popular?

“He can be quite grumpy. I have strong brows and dark hair. The angrier I would pretend to be, the funnier people thought I was. As a character he is so exaggerated and people love it. Balanzo can be a mean clown, but there’s a sparkle in his eyes. He’s irreverent and that’s lovely and fun and we laugh at ourselves.”

For the last few years, The Great Balanzo has been a staple at International Children’s Festival of the Arts.

“I’ve had a very good experience at the children’s festival. This (Arden) is the biggest and loveliest theatre where I have been featured as a solo performer. It’s a meaningful performance for me and I’m eager to invite everyone to see it.”