The Melisizwe Brothers sing a fitting tribute to the military

Remembering brings together more than 125 talented performing artists
Nov 10, 2019 10:00 AM By: Anna Borowiecki 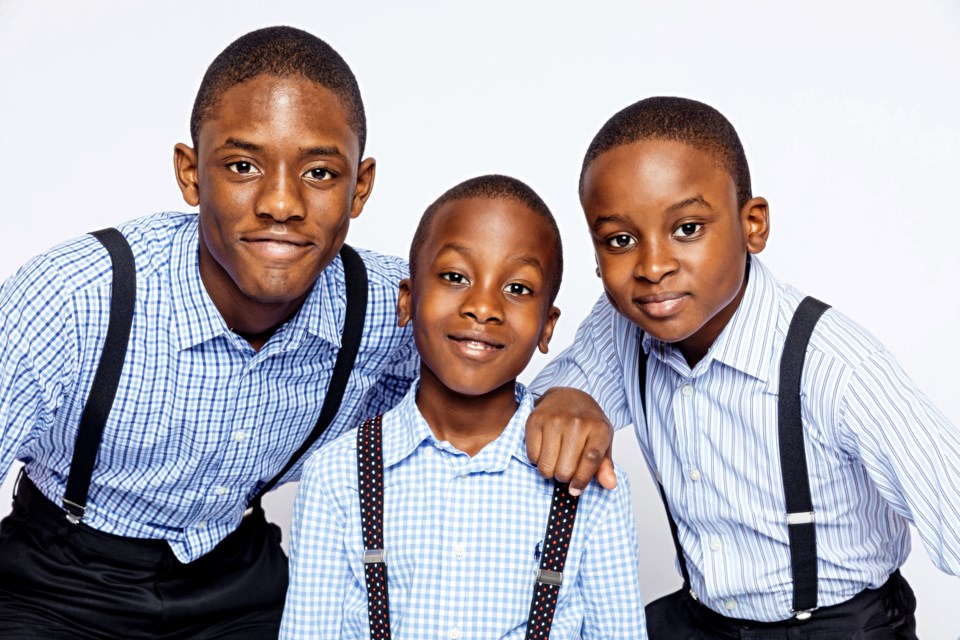 The Melisizwe Brothers ramp up Remembrance Day with a concert at Northern Alberta Jubilee Auditorium. SUPPLIED/Photo

Singing almost as soon as they could hold a note, the Leduc-based Melisizwe Brothers are current showstoppers climbing the ladder of success.

The three Canadian brothers – Marc (16), Seth (13) and Zachary (12) – are a powerhouse trio that developed quasi-instant fame when their parents, Mark and Sherry James, posted home videos of the boys singing Jackson 5 material.

The trio’s YouTube version of the Jacksons' I’ll Be There reached six million hits in three days.

This remarkable leap led to a 2016 invitation on the Ellen DeGeneres Show, and a successful run on Showtime at the Apollo 2017 hosted by Steve Harvey.

A fruitless appearance on America’s Got Talent Season 3 in 2018 refused to deter them. If anything, their work ethic has grown stronger.

The brothers are currently on the slate to reach millions performing on America’s Most Musical Family. The 12-episode series debuted Nov. 1 on Nickelodeon.

If the trio can win the hearts of celebrity judges Grammy Award-winning superstar Ciara, pop icon Debbie Gibson and digital media sensation David Dobrik, they will receive a $250,000 cash prize.

True to their humble roots, the Melisizwe Brothers continue to sing locally, covering everything from small church fundraisers to prestigious concert hall performances.

This coming Remembrance Day, the boys have planned an extravaganza at the Northern Alberta Jubilee Auditorium titled Remembering.

“We just wanted to show our appreciation for the sacrifices soldiers made. If they wouldn’t have given of themselves, we wouldn’t be able to follow our dreams,” said Marc.

Remembering is primarily a variety showcase of the region's diverse talent. In addition to The Melisizwe Brothers, a 100-voice choir, solo singers and the dazzling MelAfriques singers and dancers will be featured.

The trio has decided to forgo military music instead focusing on show tunes, pop, rock, gospel and R&B.

Visionary Centre for Performing Arts students Hannah Adamson and Sofiya Chvojka are tapped to sing front and centre. Adamson sings a duet of The Circle of Life with Zachary, while Chvojka joins Marc in the wildly popular You Raise Me Up made famous by Josh Groban.

Chvojka, a Grade 8 student at G.H. Primeau Junior High in Morinville, performed with the trio at St. Albert United Church’s Harvest Dinner Fundraiser in September 2019. The fundraiser was a test run for the Remembrance Day concert.

“It’s going to be wonderful. They are such a talented family and Marc is amazing. He has such a wonderful voice,” said Chvojka. “(The concert is) going to honour the military and their families. It’s going to be very welcoming.”

Not only are the brothers pooling a mixed bag of talent, they are also donating 120 tickets to military families in recognition of all the sacrifices made past and present.

Visionary’s Martha Livingstone has taken a role as mentor and is grooming the TMB Choir, the 100-voice choir to sing three songs including Hallelujah.

“Their ages are seven to 25 years. It’s a beautiful blend of singers at many different levels. It’s very moving to hear that many voices,” said Livingstone.

She caught the Melisizwe Brothers' Arden Theatre performance in February 2019 and described it as “high energy, fast paced and some pieces were emotional.”

Livingstone believes the brothers are destined for a celebrated future in the entertainment business.