The other side of the ropes

For actor-director Kurt Spenrath, there is a strong connection between theatre or ballet and professional wrestling. And the former St. Albert resident is backing his point of view with a film.
Feb 28, 2014 11:00 PM By: Anna Borowiecki 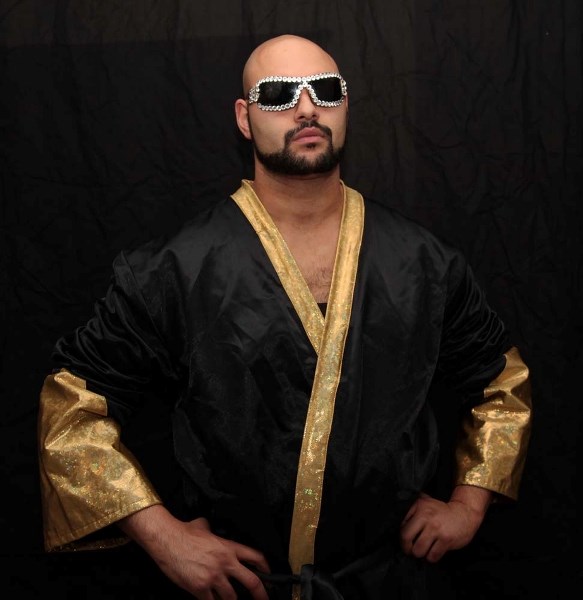 BAD GUY – Sheik Akbar Shabaz is a Lebanese-Canadian who grew up helping his father operate the Burger Baron in Lamont.

For actor-director Kurt Spenrath, there is a strong connection between theatre or ballet and professional wrestling.

And the former St. Albert resident is backing his point of view with a film.

Now living primarily in Toronto, Spenrath is back in the capital region filming The Match, a 15-minute documentary about rural wrestlers.

The Bravo Network commissioned the project that explores the nature of theatre versus wrestling and the devotion both inspire from fans.

"I'm fascinated with what is accepted and what is not accepted as art. If you compare wrestling to ballet, ballet is considered an admirable pursuit and high class. Pro wrestling instead is dismissed and people assume wrestling fans are so stupid they don't realize they're watching theatre – that the outcome is decided ahead of time," said Spenrath.

However, in wrestling fandom there is a core that can't get enough of the hard-hitting, high-flying body slams.

"There's a class of fan that goes to work every day and can't vent in front of the boss. But when he pays his $15 or $20, they can let it out. They can be the alpha dog. They can let their opinions run rampant and that just makes it better."

Under the auspices of Open Sky Pictures, an Edmonton-based production company Spenrath founded in 2012, The Match highlights two rural-based wrestlers from the Prairie Western Alliance.

Hollywood Dusty Adonis, a.k.a. Dusty Meyer, is the workingman's hero. Meyer is a 15-year circuit veteran and birdseed manufacturer from Eston, Sask.

His arch nemesis, Sheik Akbar Shabaz, is a first generation Lebanese-Canadian who grew up helping his father operate the Lamont Burger Baron.

On Saturday, March 1 each wrestler hopes to pound the other to dust as they compete in the PWA Fruition, the 2014 Esteemed Championships, at Northgate Lions Rec Centre.

Spenrath will shoot footage of the event with six cameras – two in the back dressing rooms and four in the audience.

"The beauty of the film medium is if we show it, people will meet us halfway and connect the dots. We are filming more than a compelling piece of art, but also a strange story of a passionate subculture. It's unbelievable what these guys will do for their craft."

Both Meyer and the sheik hold down physically-demanding, blue-collar jobs while spending long hours training. They also spend long hours driving across the Prairies to and from their matches, at times logging 10 to 12 hours round trip.

"It's an obsession. They're very devoted and hard working, and it's become an interesting story," said Spenrath.

Spenrath first dipped his toes in theatre as an original member of the St. Albert Children's Theatre Arts Renaissance Troupe, which performed classical works. After graduating with a bachelor of fine arts from the University of Alberta, he headed straight for a directing career.

His move to Toronto opened up a wider network of contacts that allowed him to direct at The St. Lawrence Centre in Toronto and numerous international venues such as Der Buhne Theatre in Dresden, Germany and Cino Herak in Usti nad Labem in the Czech Republic.

Searching for fresh challenges, Spenrath jumped at the opportunity to create Open Sky, a film and television production company that focuses on documentaries and reality programs.

"I live in Toronto, but my heart is firmly in Western Canada and I made a conscious decision to base a production company in Alberta."

One of the company's first successes was Hart Attack, an eight-episode documentary series focusing on the third generation of the legendary Hart wrestling family, the very talented and eccentric Teddy Hart.

Building on the Hart success, the BravoFACT (Foundation to Assist Canadian Talent) jury awarded Open Sky $30,000 as well as mentorship and intangible support for The Match.

Spenrath hopes fans will lurk at the ringside for the title bout to enjoy some bone-crushing throwdowns during a night of wrestling magic.

"It's a fun, interactive experience. It's a mix of circus and soap opera that every member of the family can get into," Spenrath says. "It's a form of storytelling. It's a form of theatre. Come out to boo for the bad guy and cheer for the good guy and let out every bit of aggression."