The Zaniac – an afternoon of comedy, music, magic and juggling 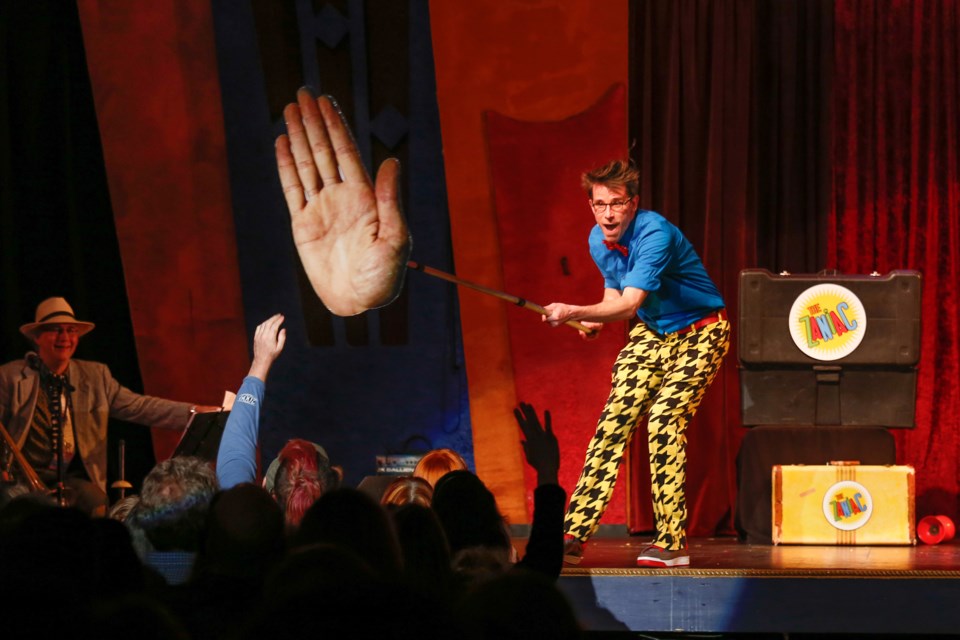 Alex Zerbe's version of a high-five takes on gigantic proportions during the Zaniac comedy hour at Morinville Community Cultural Centre on Saturday, Feb. 25.

Alex Zerbe, a.k.a. “The Zaniac”, is about to shake things up at Morinville Community Cultural Centre this coming Saturday. He is on a two-week tour headlining 14 shows across Alberta.

Based out of Seattle, Zerbe has performed physical comedy and cracked jokes for 21 years – that’s about half his life.

Through the decades, the self-described “human cartoon” has honed his chops performing on cruise ships, comedy clubs and prime-time television. He even holds two Guinness World Records and appeared on America’s Got Talent and Last Comic Standing.

His family-friendly but often wacky entertainment ranges from beatboxing, juggling and dancing to singing, music and magic. And Zerbe’s suitcases are squeezed tight with silly, fun props that match his barrage of absurd routines.

Anyone who has attended his shows is awestruck by the constant stream of physical stunts interspersed with snappy jokes.

“I have a rule. The show can’t be the hardest thing I do,” said Zerbe. When not performing, he follows a sweaty regime that incorporates strength training, balance, agility, squats and weights.

Unlike many circus performers born into the arts, Zerbe was raised in a typical middle class nuclear family. His father was a professor at the University of Washington teaching economics. His mother is a psychoanalyst and world traveller.

Zerbe’s first memories of entertaining was as a competitive hacky sack player, a sport that peaked in the mid-1980s.

“Back in the day, I remember getting a kick out of being in a circle. But I don’t remember how I even got interested in it,” Zerbe said.

At a school show, he saw a street performer and discovered the comedy of juggling.

After high school, Zerbe attended college but it wasn’t the right fit. He flitted from job to job as a baker, pizza maker, cleaning carpets and mowing lawns among others.

“I took time to figure out what I wanted to do. It’s a challenge for some young people. But if you’re willing to work hard, you can become anything you want.”

Following his own advice, Zerbe has toured 13 European countries in addition to China. He’s performed in 44 American states and visited Canada’s three western provinces. And in April he’s bound for a tour of the Maritimes.

“I’m a big believer in self-expression. It’s valuable in any profession and in relationships. It doesn’t have to be comedy. It can be writing, painting, composing music. Creativity is good for the brain.”

Now a father of two, Zerbe is grateful his mother encouraged him to share his feelings.

“When your feelings are validated, it can bring people closer together. When you watch an amazing movie, it puts you in their story. When you read an exciting book, you see the protagonist’s point of view. My show is silly comedy, but it’s a great way for kids and parents to connect.”