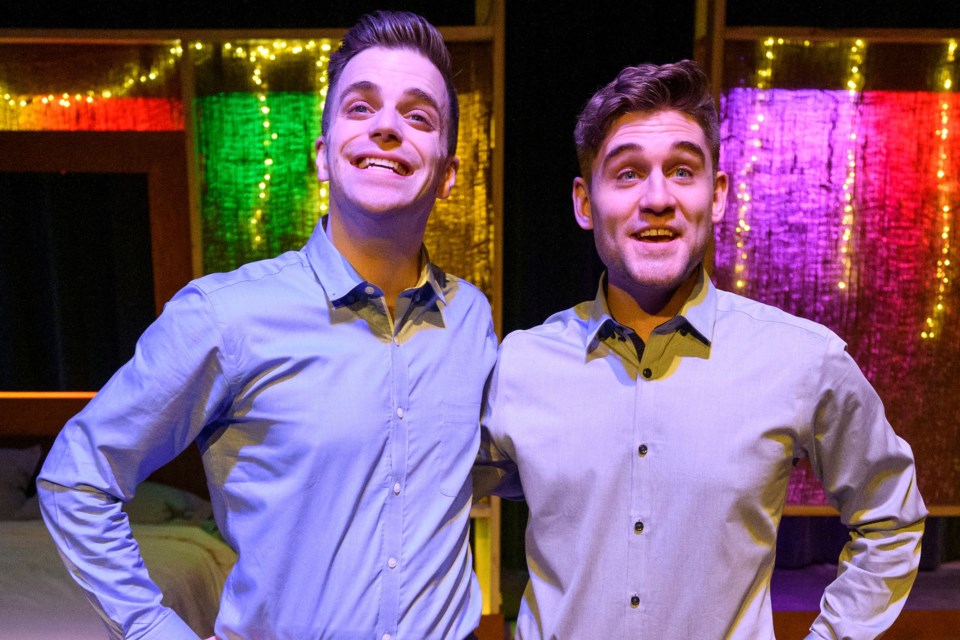 The Roxy on Gateway

It’s the dream of many urban Canadians living in congested big cities to pack their bags and move to the open spaces of small towns where the air is clean and folks are welcoming and authentic.

Playwright Mark Crawford spins a winsome tale of a couple trying to find a home. Interior designer Brett and hotel concierge Drew are desperate to move out of their tiny Toronto condo. The gay couple lost their seventh bidding war and things are not looking up.

Just when life couldn’t get any worse, Brett’s favourite aunt dies. She bequeaths him a house in a small town community he visited in his youth during summer months.

Frustrated with stalled careers and Toronto’s frantic pace, Brett and Drew move to the rural community and start up a B&B. But real life is more complicated than the Hallmark Channel’s romanticized portrayals.

The play takes place over a year where they deal with the rat race, a renovation nightmare, a B&B opening weekend that crashes, and small-town homophobia.

Do they stay? Do they go? Their dilemma becomes the comedy’s underlying theme.

As the only two actors, Mathew Hulshof as Brett and Chris Pereira are put through their paces playing 22 characters – male and female, young and old.

“It’s a really funny play. Mark hit the jackpot there. People are celebrated, even the folks that are homophobic as we get to know them and see them grow,” said director Bradley Moss.

With Hulshoff and Pereira each playing 11 characters, Moss used a map to keep the characters straight.

“I even had to colour code everything. It was a nice puzzle to figure out. Once we did, everything came together. It’s complicated and super fast. In one scene, we have six or more characters and it’s hopping everywhere.”

Crawford has structured his scenes with quick, light and funny dialogue, says Moss.

“The first act is 58 minutes, but it feels more like 30. It’s got this forward momentum. There’s a ton of dialogue and over 300 lighting cues. And there are no props. Mat and Chris create all the props, all the magic. That’s why it moves so quickly.”

When Moss originally read the script in 2013 as part of a double volume, he immediately pictured Hulshof as Brett.

“Mat is a really good actor and I could see him chewing it up. There’s something charismatic about him, the way he attacks a script and is so energetic to watch. And as for Chris, he and Mat have great chemistry.”

As a director, Moss is also thrilled that Crawford and his real life partner Paul Dunn will attend the opening night. The two actors just closed their version of Bed and Breakfast at Vancouver’s Arts Club Theatre Company and will stop over before returning to their Stratford home.

He sums up the production by saying: “You’re gonna laugh your ass off in this play. It’s so funny. It has so much heart and it’s about community. It’s an enjoyable night out and it’s money well spent.”