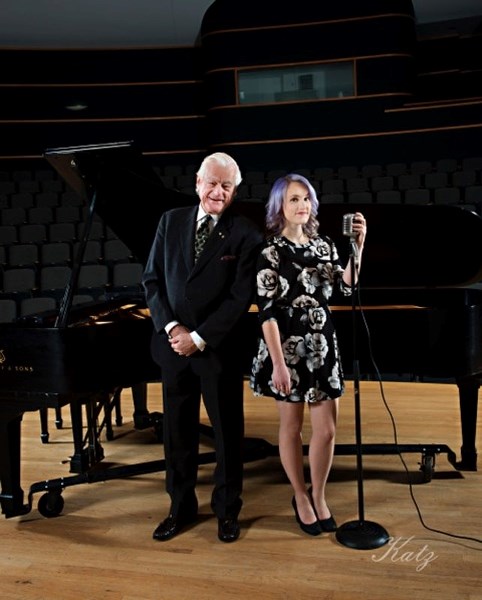 Tommy Banks, 80, could easily be one of the hardest-working men in jazz.

At an age when his contemporaries are lounging in a rocking chair reading a book, the legendary pianist/conductor/arranger/recording artist and jazz icon is doing some rockin’ of his own with jazz vocalist Mallory Chipman.

Chipman, a recent graduate of MacEwan University, is Banks’ granddaughter and the two are special guests at River City Big Band’s fifth Jazz at the Oasis on Saturday, Feb. 11.

“And bringing his granddaughter is an extra bonus. She has such a mature voice and sounds great. I’m sure you’ll hear a lot of her in future years. On Saturday, you will hear a musical legacy in the making.”

River City Big Band launched Jazz at the Oasis to celebrate 20 years of entertaining capital region audiences. To date, the concert series featured some of the biggies in jazz and blues including Wycliffe Gordon, Carol Welsman, Two Blue and Wayne Bergeron.

River City also added additional lustre to the band in the fall of 2016 when it welcomed the charismatic Ray Baril as the new music director. Baril is section head of woodwinds and brass at MacEwan University’s music faculty.

Music is a driving force in both Baril and Banks’ lives and there is symmetry to the two musicians working together again. For 25 years, Baril was a regular member of the Tommy Banks Big Band.

Chipman, on the other hand, is at the start of her career and the young chanteuse just released her debut album Nocturnalize. The expressive vocalist will sing two songs from her album: Ode to the Unsung Diva, a medium swing chart, and Vermilion Moon, a gentle bossa nova chart slow enough to be rumba.

“After you record an album, you don’t often get a chance to sing with a full big band. Mallory is thrilled to sing with a big band and feel the power behind her,” Dymianiw noted.

The concert just precedes the Valentine’s Day weekend and a romantic vibe is threaded throughout. Expect to hear classic charts such as Love Is Here to Stay, Isn’t She Lovely, I Only Have Eyes for You, Cheek to Cheek and All of Me.

“This concert will be a great Valentine’s gift, a big love fest. Everybody loves Tommy and everyone will love Mallory. She’s an exciting new artist and she’s embarking on a new career. If we can help launch her career, we’re happy to do it.”