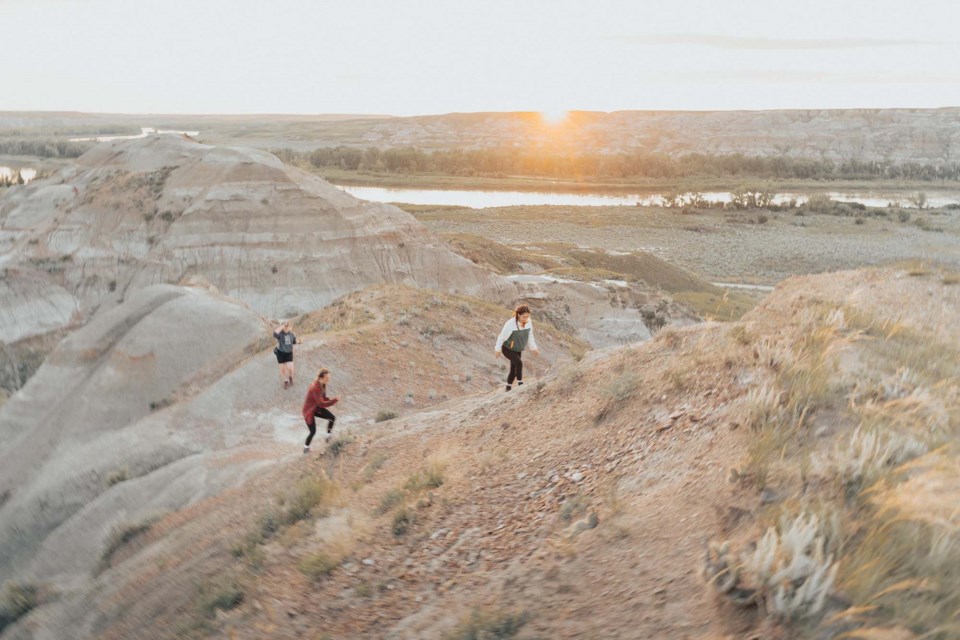 Dinosaur Provincial Park is located near Brooks, a two hour drive from Drumheller. Photo by Karl Lee on Unsplash

Dinosaurs never fail to capture the imagination because their fossils offer a peek back in time to a world we can never experience firsthand. It was a time when giants ruled the land, and humans had yet to make their mark.

Did you know that Alberta is holds one of the richest deposits of dinosaur fossils in the world? It’s true! Our very own province yields some of the strongest clues of this bygone era, and lucky for us, we get to interact with these finds in real time. Read on to discover the family fun with dinosaurs you can have in Alberta.

The first place many people think of when it comes to dinosaurs in Alberta is The Royal Tyrell Museum – but one of the most prolific sources of fossils is actually located near Brooks, a two hour drive from Drumheller. It’s Dinosaur Provincial Park where you can camp/glamp, take an interpretive tour, learn about on-site paleontology and projects, enjoy trails, and check out the visitor centre. A variety of events (subject to change and COVID restrictions) lets guests cast a fossil, create desserts with a chef, hike the badlands, and more.

The Royal Tyrrell Museum is located in Drumheller. Of course, no dinosaur enthusiast can resist a trip to this famous attraction! As the only museum in Canada focused completely on the study of ancient life, this museum boasts hundred exhibits and holds one the world’s largest displays of dinosaur fossils. The exhibits walk you through the various ancient eras, and a cretaceous garden grows relatives of plants that flourished in Alberta millions of years ago. Plan for a full day (or two) when exploring the Royal Tyrrell.

One of Canada’s newest museums, and dedicated to noted Canadian palaeontologist Dr. Philip J Currie, this museum is located in Wembly. Exhibits include the Pipestone Creek bonebed, the Devonian oceans, a fossil lab, and the Cretaceous Period, among others. This is also a place of learning; a virtual speaker series has a variety of topics from new discoveries to deep dives into ancient dinosaur life, and fossil identification is available by drop in at designated times.

As you drive up to Drumheller you can see it looming over the town in the distance. It’s the world’s largest dinosaur, an interactive Tyrannosaurus Rex that rises 86 feet above the ground. Conquer the 106 stairs inside and you’ll be rewarded with a breathtaking view of Drumheller’s spectacular geography.

As if you needed another reason to visit the Calgary Zoo, venturing into Prehistoric Park is a great way to be awed by the grazing triceratops, cowered by the teeth-baring Tyrannosaurs Rex, and immersed in a world where humans are tiny compared to the life-sized models around them. The Prehistoric Park is modeled after how Alberta likely looked when dinosaurs were the dominant species. It’s one of the most immersive ways to “go back in time.”

Apart from these, there are many attractions and museums in Alberta with dinosaur exhibits or fossils. If you or your family members are dinosaur enthusiasts, you don’t have to travel far to indulge this passion. Alberta is progressive yet filled with reminders of our ancient past. Plan a trip to a dinosaur attraction today.

Nerissa McNaughton is a freelance writer and regular contributor to Great West Newspapers. This story was funded by the Facebook Journalism Project Supporting Local News Coverage of COVID-19 Program via the Local Media Foundation.