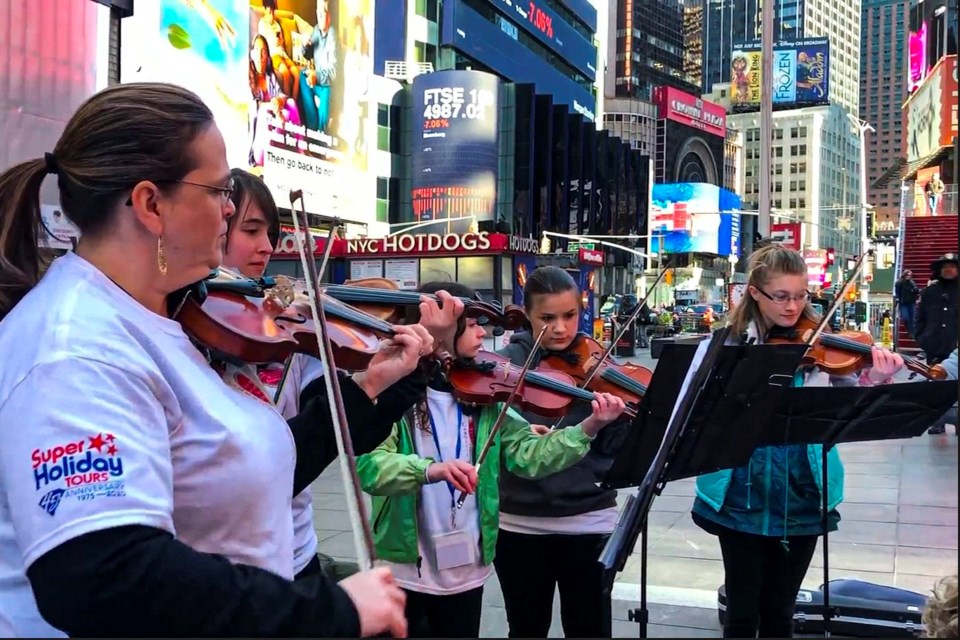 NEW YORK — How do you get to Carnegie Hall? Practice. And when the coronavirus cancels the performance you've been practicing for? Take it outside.

A group of Oregon students decided they were going to perform Monday in New York City, even if it wasn't quite where they had originally planned.

The young musicians from the Alliance Charter Academy in Oregon City, Oregon, got word their planned Carnegie Hall performance had been just before they were scheduled to leave. Some of them decided to come anyway, and took their stringed instruments to Times Square, playing for the few hardy souls still out and about.

“It’s a good message to keep going and to teach kids to persist even when your dreams are crushed," said Anna Mersereau, 41, orchestra director at the school. “You don’t stop, you make the most of it and you take what life gives you and you keep going."

There were tears initially, she said, but after about a day, some students figured they were no more at risk on the East Coast than they were on the West Coast, so they came, with plenty of hand sanitizer and maintaining distance between themselves and others.

In addition to Times Square, they were planning to play outside Carnegie Hall as well.

The kids found the bright side of the unusual experience.

“We're always probably going to remember as the trip we were going to play at Carnegie Hall but now it’s the trip we played at Times Square which we weren’t planning to do," said Christian Hall, 17.

“Even though that’s kind of a disappointment, it's been a great trip," he said. “I’m happy the way it turned out, it would have been cool if it would have gone the other way, but either way it was a great trip."

The new coronavirus causes only mild or moderate symptoms, such as fever and cough, in most people but can cause more severe illness and death for some, especially older adults and people with existing health problems. The vast majority of people recover.

The worldwide outbreak has sickened about 175,000 people and left more than 6,700 dead.

While nonstop global news about the effects of the coronavirus has become commonplace, so, too, are the stories about the kindness of strangers and individuals who have sacrificed for others. This is the inaugural story in an AP continuing series called, “One Good Thing.”

The Associated Press receives support for health and science coverage from the Howard Hughes Medical Institute’s Department of Science Education. The AP is solely responsible for all content.