In Italy, theatre reopens in town devastated by COVID 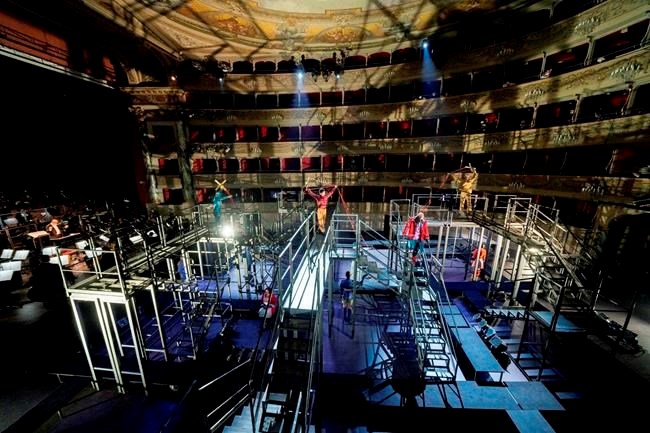 MILAN — In a signal of rebirth, the Donizetti in the northern Italian city of Bergamo, devastated by the coronavirus pandemic, reopened this weekend after three years of renovations.

But the planned gala celebration had to be postponed, and new productions for an annual festival dedicated to the city's native composer Gaetano Donizetti had to be streamed online from an empty .

Festival musical director Riccardo Frizza said the autumn festival was envisioned as a life-affirming moment for the city and province, where 6,000 people died in a single month last spring. In the summer he conducted Donizett's Requiem, performed outside the city’s cemetery in tribute to the dead.

“You have to know that in my festival orchestra and in the chorus there are people who lost two or three family members,’’ Frizza said. “We couldn’t do the festival without having done this tribute to those who aren’t with us anymore.”

Plans for an audience had to be scrapped after the virus started to resurge in October, even if Bergamo itself is experiencing lighter contagion than the spring, when images of army trucks transporting the dead to other regions for cremation laid bare the pandemic's toll. The calendar was cut to three productions.

All three weekend performances of Donizetti’s “Marino Faliero,” “Le Nozze in Villa” and “Belisario” are available online indefinitely for a subscription price of 59 euros ($70.) Frizza said the money is needed to help freelance singers and musicians recoup some income during a year in which classical music has been all but shutdown by the coronavirus.

Italy shut all in February, and there was a tentative reopening over the summer.

While some other are offering free online streaming of their archives, Frizza said few are offering new opera productions. The Donizetti package includes extras like commentary, interviews and a virtual tour of the renovated , its frescoed ceilings given a fresh vibrancy. Another Donizetti opera filmed last year, “L'Ange De Nisida," will be released on Wednesday.

To ensure the health of the Donizetti Festival orchestra, singers and chorus, strict protocols were put into place, including weekly testing and separate rehearsals. During the weekend performances, the chorus, most of the orchestra and Frizza wore masks.

At La Scala, more than 40 members of the chorus have tested positive for the virus, plus another 18 in the orchestra.

“No one can imagine the March lockdown without music, without books, without televised performances,” Frizza said. “The pandemic has taught those who hadn’t understood before, the importance of culture, arts and beauty in the world.”