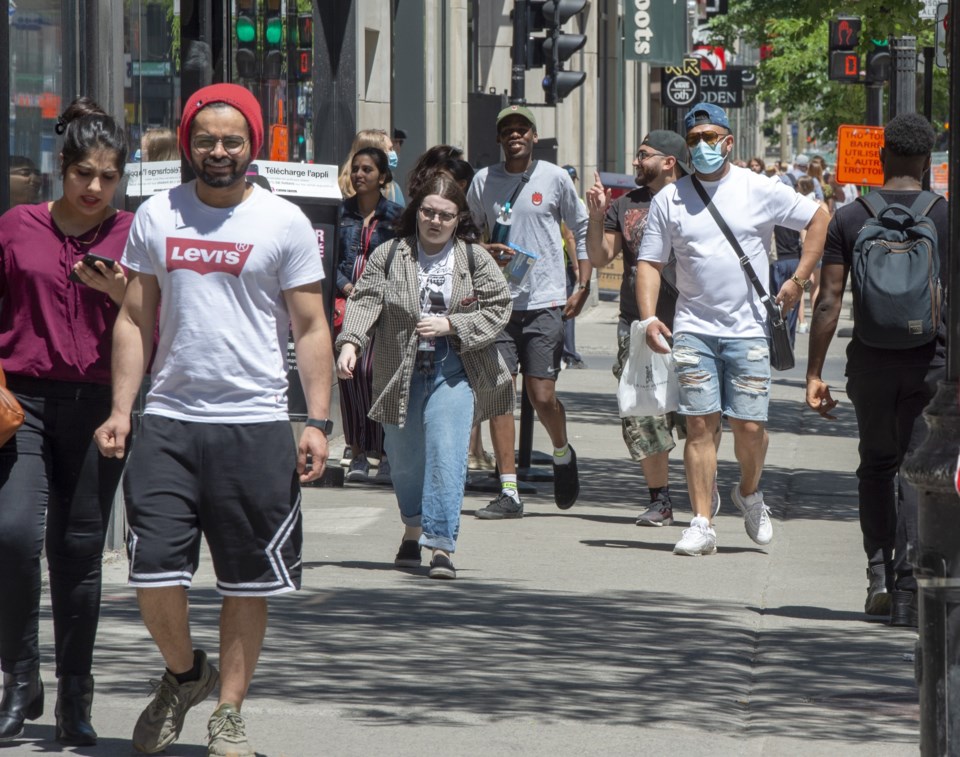 A group of 239 scientists and physicians urging the World Health Organization to recognize the potential for airborne transmission of the novel coronavirus have sparked debate over how COVID-19 is spreading.

But some Canadian infectious disease experts say not to get hung up on the term "airborne," and that the safety precautions we're already taking to slow the spread of the virus are working.

"To the general public the word (airborne) can be pretty confusing because it suggests that COVID is gonna come through the keyhole and get you in your sleep. And well, it isn't," said Colin Furness, an epidemiologist with the University of Toronto.

"No one is suggesting COVID behaves anything like measles. ... That's not the point (the scientists) are trying to make."

In an open letter to the WHO published Monday, scientists across 32 countries called for the organization to revise its safety recommendations to mitigate possible spread of COVID-19 through aerosols — tiny, light particles expelled when people cough, sneeze or breathe that stay suspended in the air for longer periods of time.

The WHO currently classifies SARS-CoV-2 as a droplet virus, spreading through larger, heavier particles that can travel one to two metres before hitting the ground. While the organization aknowledged in a press briefing Tuesday that there is "some evidence emerging" for aerosol spread, they also say it is "not definitive."

Furness says from what we've seen of COVID spread in clinical practice, it's droplet based, but the scientists behind the letter have a point, too.

He said people release particles of all sizes when they breathe, and SARS-CoV-2 can be found in smaller droplets. But that doesn't mean they are effective in trasmitting the virus, he added.

The scientists' letter mentions a COVID-19 outbreak at a Chinese restaurant where customers at tables further than two metres apart became infected. While the authors use that as an argument for COVID's spread through aerosols, Furness said that's not necessarily the case.

"It could be (evidence of aerosol spread) but it also could be that they touched the same thing. We don't know," he said. "Also one would need to explain why didn't everyone in the restaurant get sick?"

"So WHO is right that there isn't a clear case. And the scientists who signed that letter are right saying we do need to look at this ... because it could have an impact on what we say is safe."

Dr. Bonnie Henry, B.C.'s provincial health officer, praised WHO on Monday for "doing an amazing job trying to keep up with what's going on," and said she thought the scientists' letter was "trying to foment a bit of controversy."

Henry added that while COVID does seem to be released in small droplets as well as large droplets, we don't know how potent those smaller particles are.

"Where there's some challenges is how much is due to the small aerosols which are transmitted when I'm close to you, or the larger droplets that tend to fall out more readily," Henry said. "So it's really a bit of nuance, I think."

Dr. Zain Chagla, an infectious disease physician and an associate professor at McMaster University in Hamilton, doesn't believe the novel coronavirus is transmitting through aerosols, at least not to an extent we should be worried about.

"We would have seen huge rates of transmission if this was a predominantly aerosol virus. We would have not been able to control it as well as we did.

"In reality, there is probably some degree of small aerosols that would carry COVID-19 in average day-to-day contact, but it's probably very minimal."

Chagla also believes the argument for aerosol versus droplet transmission is "more of a discrepancy on the exact scientific terminology" of what airborne actually means.

COVID-19 does have the potential to transmit through small particles when patients in hospital are undergoing "aerosol-generating procedures" like being intubated, Chagla said, and WHO also acknowledges that.

In those instances, health-care workers are given proper personal protective equipment (PPE), including N95 masks, which protect against small airborne particles.

But Chagla highlighted a specific case from early in the pandemic, before evidence of community spread, when health-care workers treated a COVID patient in California without proper PPE. Out of 121 health-care workers that treated the patient and performed "multiple aerosol-generating procedures," only three got sick.

"So you had 118 individuals that ... did not wear N95 masks which would be the only protection against aerosol viruses, and they did not get infected," he said.

Chagla compared the situation to measles, which has a reproduction number of about 18 — meaning one infected person will infect 18 others. Measles particles can stay suspended in the air of a room for hours after an infected person leaves it, Chagla said, and you can catch the virus from a much further distance away.

Dr. Howard Njoo, Canada's deputy chief public health officer, said Wednesday that evidence so far has not shown COVID to be airborne "in that classic definition in a sense as measles."

"And certainly based on what we've done so far in terms of public health measures, they've been proven effective," he added.

Furness said COVID-19 has a reproduction number of two, while Njoo believes that number to be in the "3, 4 or 5" range, based on the most recent epidemiology.

Other coronaviruses have smaller reproduction numbers (0.5 for SARS and 1.5 for H1N1), so Furness says that could mean there's more going on with COVID.

"COVID is doing something to be more infective than your average respiratory virus," Furness said. "And I'm nowhere near saying it's airborne, because I don't think that's an appropriate statement. But I think those aerosols, those smaller droplets that we're disregarding, they might be important."

Both Furness and Chagla say there's no indication that the general public will need to do any more to protect from potential aerosol spread of the virus.

Chagla says the points emphasized by the scientists in the letter mirror what we're already doing, like having events outdoors rather than indoors to ensure proper air flow.

Face coverings become more important if we have to worry about aerosols, Furness says. And even though smaller particles can get through cloth masks, the fabric will slow them down.

"The more we can slow down the trajectory of what comes out of your mouth, the less it disperses," he said.

—With files from Hina Alam

This report by The Canadian Press was first published July 8, 2020.