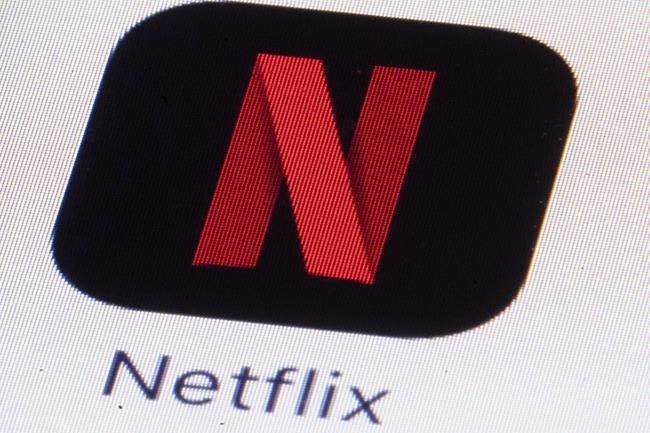 TORONTO — Netflix is lowering video quality for its subscribers in Canada as it attempts to reduce soaring demands on internet bandwidth in the midst of the COVID-19 pandemic.

The streaming giant says it introduced changes on Thursday that are designed to slash its data traffic by 25 per cent as internet service providers deal with a surge in user activity.

The lower bandwidth streams of Netflix programs should still deliver the usual quality of each plan, the company said, whether it's ultra-high definition 4K, high-definition or standard definition.

"We believe that this will provide significant relief to congested networks and will be deploying it in Canada for the next 30 days," said Ken Florance, vice president of content delivery in a statement on Thursday.

The move comes as telecom companies see a rise in bandwidth usage while Canadians self-isolate at home and use video streaming services more frequently than usual.

Bell Media said it's planning its own traffic measures for the Crave streaming service, which offers programming from HBO and Showtime. The telecommunication company's quality reductions may downgrade higher-definition streams even more than Netflix.

"Crave does plan to temporarily reduce the quality of streams on certain devices," the company said in a statement late Thursday.

The Crave 1080p and 4K streams will be reduced to 720p on Android mobile devices, Chromecast, and Apple products, including its Apple TV devices, it noted.

Netflix previously introduced bandwidth measures in other parts of the word over the past two weeks. Similar reductions in video quality were made in Europe, India, Australia, New Zealand and some Latin American countries.

In a blog post last week, Florance explained that Netflix has many different levels of streaming quality for each title within each resolution tier. With the changes, he said Netflix is simply removing the highest bandwidth streams, which lowers the bitrate per second on the streams.

"We are living through a global crisis, and we all have a responsibility to help where we can," he added.

Other streaming companies have made changes in certain regions to limit bandwidth.

YouTube announced similar moves to ease the pressures on internet traffic earlier this week, while Disney Plus and Amazon's Prime Video have enacted bandwidth measures in Europe.

A representative for Disney says the streaming service isn't planning to do the same in Canada at this time, while a representatives for Amazon did not immediately provide comment.

This report by The Canadian Press was first published on March 26, 2020.