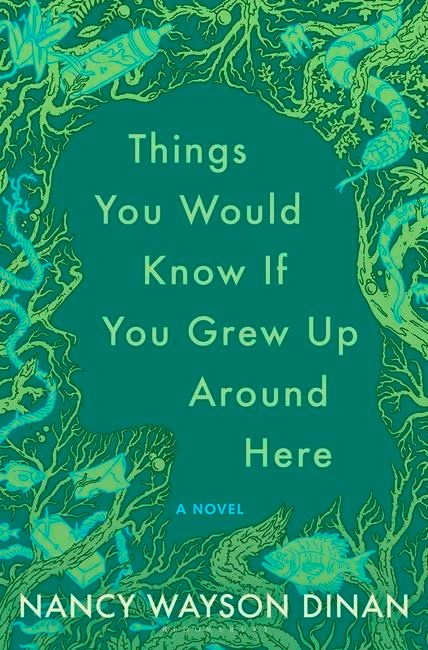 “Things You Would Know if You Grew Up Around Here,” by Nancy Wayson Dinan (Bloomsbury)

You’ll find “Things You Would Know if You Grew Up Around Here” in the fiction section, but this debut novel from a doctoral candidate in fiction writing at Texas Tech is something more than that. An imagined story, sure, but it all takes place during a real-world event — the Memorial Day floods of 2015 in west-central Texas. There’s more than a little of Salman Rushdie’s magical realism at play, as ghosts wander through the mist, scarecrows walk and vines reclaim the landscape.

The main character is an 18-year-old girl named Boyd Montgomery, who is described “like the forked stick of a dowser, positioned over dry earth, tuned not to water, but to pain.” Home-schooled since seventh-grade, when her empathetic burden became too much to bear, Boyd is most at ease in nature. She isn’t planning on going to college or living anywhere less rural than the Texas hill country because “she needed that green as ballast, as a grounding.”

Boyd’s best friend is a teacher’s son named Isaac. They aren’t quite a couple, having slept together only once and reluctant to discuss a future together, but there is a palpable attraction. He’s the only person she’s never been able to “feel.” She’s at peace around him, not distracted by the emotions she senses around others. On the day the drought ends and the rivers explode from their beds, Isaac gets a call from his father, Ruben, a high school English teacher who has always been intrigued by tales of a buried treasure in San Saba County. He sets off to meet up with his dad, not knowing the roaring waters are already too high in places for a car to pass.

Isaac’s disappearance sets the rest of the plot in motion, as Boyd goes looking for him, and Boyd’s mother, father, aunt and go looking for her. It all happens between May 21-25, 2015, with the chapters timestamped so readers can keep track of who is doing what, when. A map at the front of the book would have helped for non-Texan readers.

Dinan also employs another device between chapters, short interstitials that share the title of the novel. By the end of the book, the first-person narrator of these interludes is made clear, but I thought of them at first as news breaks on NPR. Here are segments from one: “There are no natural lakes in Texas. None. … In Texas, lakes are dammed river valleys. … When dams were built by the Tennessee Valley Authority, the government moved cemeteries, but not here in Texas. … This ground is full of the people who came before.”

Spoiler alert: Those people from the past appear, mostly to Boyd, as she navigates the suddenly apocalyptic world. You’ll have to decide for yourself what purpose they serve and whether the novel’s conclusion feels earned. But it’s a journey worth taking as Dinan offers readers a reminder that what happened in Texas nearly five years ago is just one small piece of the climate disasters to come.