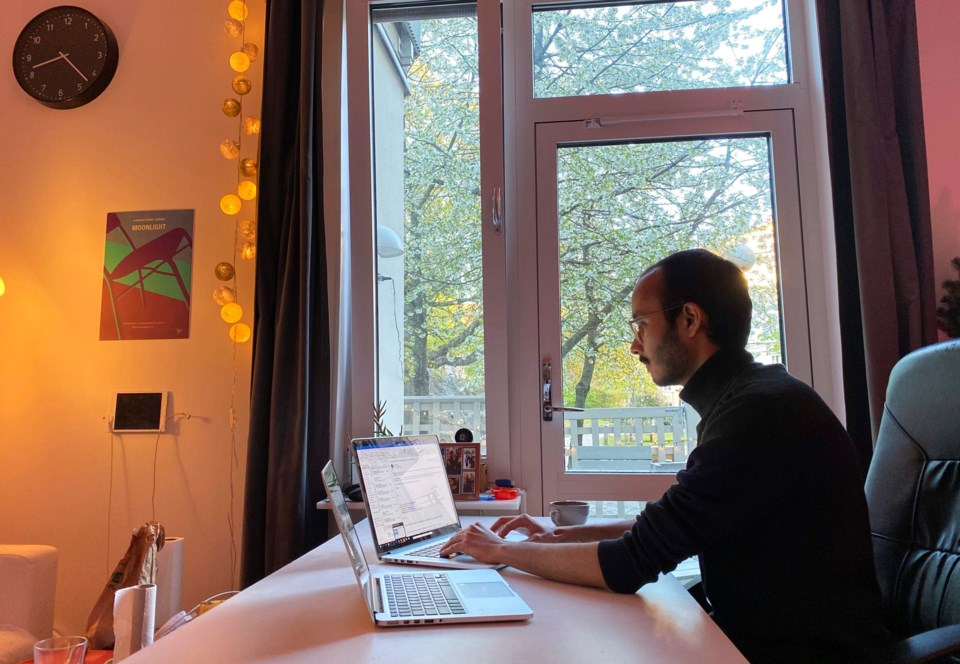 A buzz of my phone. “Free for a walk?” asks a friend. Another notification. “Coffee on Wednesday?” “Come for drinks!”

I’m at a loss. I’m working remotely from Stockholm, out of the London office. Long shifts producing stories on how swaths of the world’s population are staying home to keep the virus at bay and quash staggering death counts.

But outside my door, I’m confronted by a different reality. Sure, university students are distance learning, travel is discouraged and many are working from home. But plenty of my friends are working normally. When I cycle into a leafy inner-city quarter on Easter Sunday, I find bars brimming and families flocking to parks.

Official advice tells anyone not “vulnerable” to stay home only if symptomatic, and to socially distance when out. We’re not actively seeking herd immunity, they say. But equally, we don’t want to suppress the virus by locking down, testing and tracing.

Authorities stress their plan is evidence-based and sustainable. That the virus can’t be contained in the long run. Ultimately, they say, don’t judge our strategy on its death toll. Evaluate the situation “in four to five years’ time.”

But doubts linger, and fester, in my mind. There’s a jarring disconnect between covering what feels like a whole world taking major precautions and living in a country that isn’t.

I can’t get the images I’ve been processing for hours at work out of my head. WHO's Dr. Tedros urging the world to “test, trace and isolate.” Drone shots of silenced old towns in Belgrade and Sarajevo. Masked Hong Kong officials reporting single-digit mortality rates.

In Sweden, a vast acceptance of the strategy has swept across the nation. Parties left to right have rallied behind the authorities. Noteworthy dissent has come from 22 scientists, demanding more restrictions and testing, but they have been broadly dismissed as unhelpful and obsessive.

Researcher Gina Gustavsson suggests this stems from the country’s pride in its democracy, openness and scientific research. To challenge the strategy is to challenge Swedes’ most cherished values. There’s a pride in staying open and trusting the experts.

Ina Hallström argues this faith has meant people widely believe that the fast rising levels of death we’re witnessing are inevitable — when that might not necessarily be the case.

These deaths have exposed cracks in the Swedish nation, leaving some in disproportionately affected groups wondering how much their lives really matter.

Swedish-Somalis, seven times overrepresented in April’s case numbers, have slammed the Christian Democrats’ leader for linking this to “illiteracy.” Instead, they point to socioeconomic factors; an inability to work remotely and overcrowded households.

Eric Hammarstrand, who is disabled and at risk, asks why able-bodied Swedes couldn’t bear the thought of locking down, when many disabled people “were involuntarily quarantined until 1993” before independent living reforms. “You can do it, too, for a few months.”

I realize I can’t leave my friends on “read” forever. Eventually, I tell them the truth: I miss them, but I’m not comfortable meeting right now. I want to continue seeing my parents for distanced lakeside walks. Let’s Zoom.

They say they fully understand. But it’s still an awkward , and I feel like an overcautious outsider.

Even as transmission slows, Sweden’s death toll has soared to over 4,200 — four to nine times higher per capita than Nordic neighbours. Antibody levels are disappointingly low. A sense of unease finally seeps into the national debate, expanding as the nights contract.

A party close to government calls for change. Health minister Lena Hallengren indicates testing and tracing may be ramped up.

Dazzling sunshine in the courtyard belies the anxious parallel life I’ve been living. I wonder if now, perhaps, I’ll feel less out of place.

Virus Diary, an occasional feature, showcases the coronavirus saga through the eyes of Associated Press journalists around the world. Follow Phelan Chatterjee, an AP video producer usually based in London, on Twitter at http://twitter.com/PhelanChatterj .