"Equality is something that has to be created and you do it together. Equality comes from kindness, from justice, from respect. It comes from creating compassion. If we don’t have compassion, how can we help humanity move forward?”
Mar 9, 2021 5:40 PM By: Anna Borowiecki 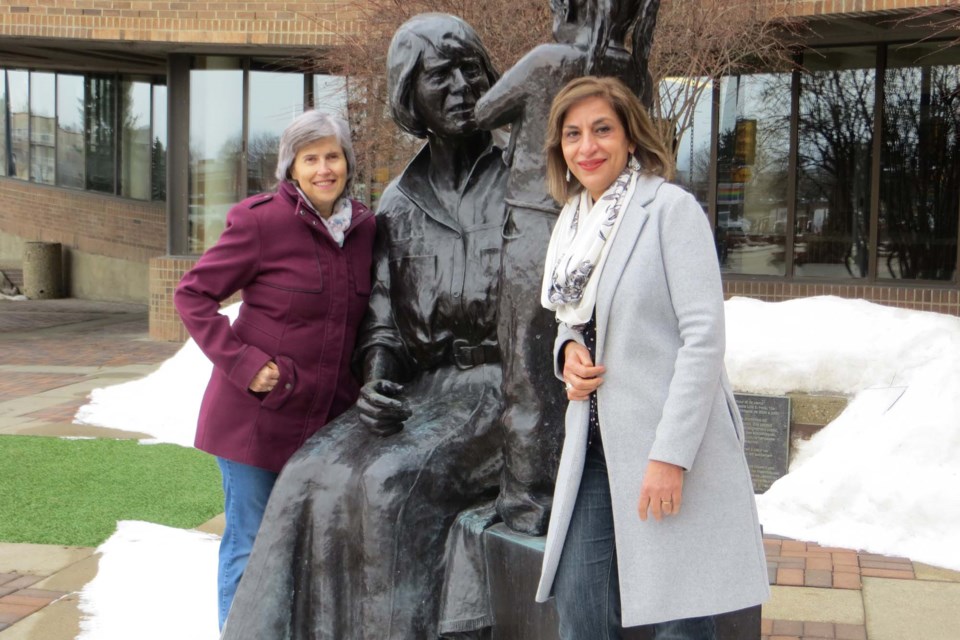 Elaine Tahririha, left, and Mitra Taef are the driving force behind the St. Albert Baha'i International Women's Day celebrations. They stand beside the statue of Lois Hole, an IWD honouree during its inaugural year in 1996.ANNA BOROWIECKI/St. Albert Gazette

The United Nations' declaration marks it down as March 8, but across the world events are celebrated all week. As we think about the women in our lives, two compassionate individuals stand out as a duo that uphold the United Nations 2021 theme of Choose to Challenge.

Mitra Taef and Elaine Tahririha, both members of the Baha’i faith, have for 25 years organized St. Albert’s version of International Women’s Day (IWD). Through the decades, they paid tribute to 127 women who, through their commitment and dedication to a cause, have held powerful leadership roles in the community.

It is no small feat selecting honourees and organizing a public reception. Despite all their efforts to showcase other women’s potential and accelerate gender inequality, Taef and Tahririha’s personal achievements have remained largely unnoticed behind the scenes.

It is time to level the playing field and flip the script. It is time to highlight these two powerful feminine voices and what propelled them to showcase IWD back in 1996.

Mitra Taef is intelligent, soft-spoken, articulate and always elegantly attired. She also exudes the inner strength of a woman who has faced barriers and challenges not within her control.

Born in Iran, Taef was an inquisitive young girl who yearned for a post-secondary education. Not only were Iranian universities few and far in between, but the family also lacked funding for such a privilege.

Since her brother was living in the Philippines, Taef moved to the country of 7,600 islands and studied laboratory technology. She was six months shy of graduating in 1981 when Iran refused to renew her passport.

“We did not have a legal passport. We had to leave. At the time, only two countries accepted religious refugees – Canada and Australia. The wait for Canada was three to four months and Australia was six to eight.”

Brother and sister moved to Saskatchewan and she restarted her education from scratch to complete a computer certification. Today Taef is a general manager for a union trust fund.

“I got an education. I got a job. I have no regrets,” said the mother of three adult children.

It was Taef who first tossed out the idea for St. Albert Baha’i to host IWD. A key principle of Baha’i faith is the promotion of gender parity and maximizing women’s potential. For Taef, IWD was a clarion call to make meaningful changes in equality today and for future generations.

“What we ask is equal opportunities, equal voice, equal education. The feminine voice is very important. We need to raise our children in a way to respect women. The way a woman raises her children impacts the entire family and it impacts future generations.”

Not only has IWD become a learning platform for the community, but it also affected Taef in unexpected ways.

“When we started the first year, we met so many interesting women and we learned from them. We nominated five women. Their stories inspired and impacted us.”

Elaine Tahririha feels equally strong in her convictions to empower women. The mother of three jokingly calls herself a “serial teacher,” but the truth is she loves to mentor all ages. Her joy in life comes from sharing stories with girls and women in hopes of inspiring them to dare, to explore and to lead with change.

Born in Consort, Alberta, Tarhririha attended the University of Alberta to obtain a teaching degree and several years later moved to Quebec City to study French at Laval University. At different periods in her life, she taught at both Legal School and Father Jan Elementary School.

As a young girl, it was society's dual standard applied to her mother and other women that opened Tahririha's eyes to gender inequality.

“My mother was a very intelligent woman. I would listen to conversations and hear her make important points with lots of insights. Usually, they were ignored. Two minutes later, a guy would say the same thing and it became important.”

Interestingly enough, her mother was a nurse who eventually held an influential position as director of the West Central Alberta Health Unit.

“I saw her in a position of leadership and I heard other women put her down because she was in a high post. But she was doing what she was called to do. It was men holding her down. It was women holding her down because of her position. I started to understand that without rights, without money, women are abused and treated poorly. Without your own money, you don’t have freedom of choice.”

It was these early incidents that provided the fuel to root out discrimination and challenge stereotypes.

“For a long time, I was really angry with men. I thought they had equality and were withholding it from us. I was wrong. Equality is something that has to be created and you do it together. Equality comes from kindness, from justice, from respect. It comes from creating compassion. If we don’t have compassion, how can we help humanity move forward?”

For both Taef and Tahririha, their hard work has earned a great deal of respect. More than that, it has amplified underrepresented voices and celebrated the beauty in our differences.