Goal of fundraiser is to create more accessible walkways so more people can enjoy the gardens.
Jun 26, 2021 5:40 PM By: Anna Borowiecki 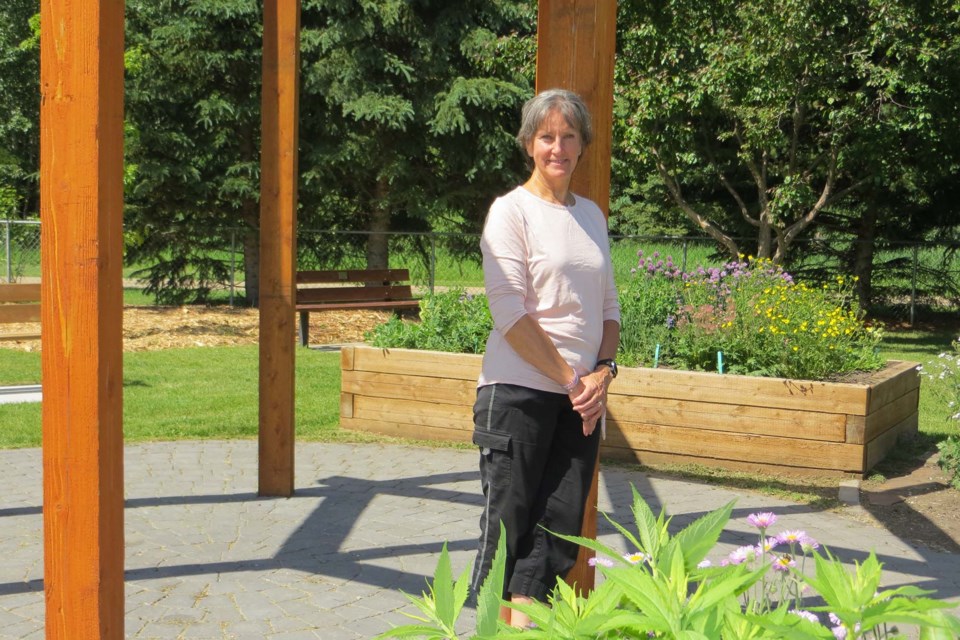 St. Albert is home to a world-class, volunteer-run botanic garden that is the envy of the region. The St. Albert Botanic Park, located just off the banks of the Sturgeon River, is about to enter a new phase of development.

Botanic Park treasurer, Wendy Loar, one of the project’s key advisors, said a fundraiser is underway to create a brick path at the West Park. Officially dubbed the West Park Engraved Pathway Project, the bricks or paving stones will cover a flat grassy area carved between beds.

The pathway starts at Lilac Lane and continues to the west end pergola. It measures 457 metres long and nearly two metres wide. The estimated price tag is $100,000.

Currently, slightly more than 50 per cent of the park is served with brick paths that allow visitors easy access to the many beds and plantings. Loar sees numerous advantages to turning the grassy area into a stone walkway, especially for people with mobility issues.

“I would bring my mother to this special place. Later she used a walker and when I brought her to this area with lilacs, she couldn’t walk on the grass with her walker. She wasn’t able to walk past the lilacs. Building a path just makes it easier for people to walk,” said Loar.

Organizers discovered that visitors in wheelchairs or walkers, families with strollers, or anyone who finds walking on even surfaces difficult, often do not venture onto the West Park's grass surface.

“Volunteers often pull wagons filled with tools to do their job. It’s easier to pull on brick pathways, especially after it rains when the grass and ground is really soft.”

The walkway will be constructed of grey paving stones. For a donation, individuals or families can have personalized inscriptions written on the bricks.

“We encourage people to remember something from their history – a birthday, an anniversary, a special occasion, a graduation, or a memory of loved one or a pet. It could also be something whimsical, a verse or an expression.”

“It keeps those special memories alive and it’s a way to let others know how important this was to someone. It is so other people can see this person or occasion had meaning to someone. And as you yourself walk the pathway, it’s something physical to hold on to.”

Organizers have planned for 200 15-by-22-centimetre and 50 22-by-22-centimetre engraved stones dotted throughout a walkway of plain bricks. A donation of $300 is requested for the smaller inscribed stones and $500 for the larger ones.

The botanic park has already received a sizeable donation from a resident who does not wish to be identified, however she emailed The Gazette a short comment about why she made a donation.

"I would like to get the message out to the citizens of St Albert and area about the gem they have; and of the proudly dedicated, mostly elderly, volunteers who are stewards of the garden/park. This is also a call for young people to get involved in this community garden/park and help to consistently and proudly make it the number one tourist attraction in St. Albert.”

Fundraising for the walkway will continue throughout 2021 and construction will begin in 2022.

Engraving details are available at the park office on Sturgeon Road, by phone at 780-458-7163, or by email at [email protected]