Packed streets a sign of visitors' excitement at being able to get out in the sun and socialize.
Jun 17, 2021 2:03 PM By: Anna Borowiecki 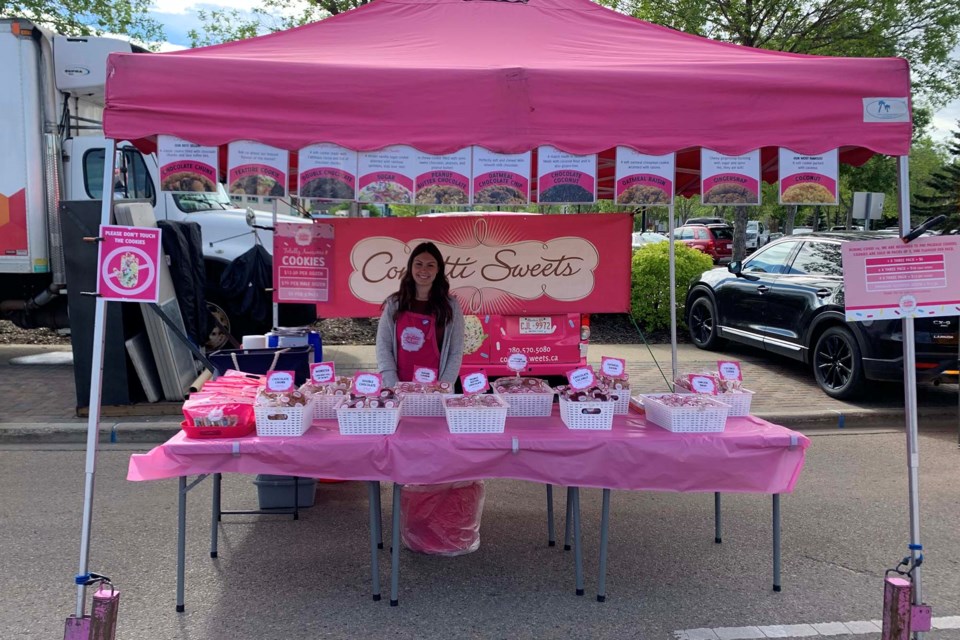 Cassidy Rogoski of Confetti Sweets gets ready for the wave of crowds that descended at the 2021 opening of St. Albert Farmers' Market on Saturday, June 12. STEPHANIE LADOUCEUR/Photo

Eager shoppers streamed to the 2021 opening of the St. Albert Farmers’ Market in cars, by bus, on foot, and pushing strollers. Recorded temperatures hit a high of 23 degrees on Saturday, and for most part, the sunny weather and the outdoor market symbolized COVID-19's fade into the background.

Throughout most of the day, lineups starting at St. Thomas Street stretched for more than a block as shoppers waited to enter the sprawling market that extended down St. Anne Street and St. Anne Promenade.

Billed as the largest outdoor farmers’ market in Western Canada, the S-shaped market at times appeared packed to overflowing with its country-urban-ethnic vibe. Folks rambled among the 187 stalls and loaded up on diverse foods from raspberries, pyrogy, fish, eggs, meats, pickled vegetables, and old-fashioned pies.

Sandwiched in between food vendors, salt-of-the-earth artisans sold hand-made jewelry, wooden home décor, pottery, metal art, and books, and every piece was a cultural reflection of the region. Oh, yes, and shoppers with pets also found booths with tasty snacks for their faithful pooches and finicky felines.

One of the most popular booths was Confetti Sweets, a Sherwood Park cookie-baking business that sells 10 flavours. Employees Cassidy Rogoski and Stephanie Ladoucer brought 912 cookies sold in packages of three. By 1 p.m. only nine packets were left.

“We weren’t expecting this. Last year we were in a totally different spot at Servus and there were less people coming to us,” said Ladouceur.

Employee Lee Kelly said he sold out of three cases of the blueberry and raspberry wines he brought and attributes that to the ambiance.

“I like the vibe here (downtown). It’s really cool. It’s very laid back – not as mechanical as before (at Servus),” said Kelly.

Victorian Grooming Company is enjoying a brisk third season at the market and Fehr was enthused about the customer inquiries and sales.

“This is a nice change of pace. I feel people appreciate it more downtown. It’s more welcoming. Servus, I found, you had to go straight to it to buy something. But as a consumer, when you’re shopping, I think people like to walk around and happen upon a product,” Fehr said.

Despite a two-hour drive in each direction from Clive, the only market Russell Gwozvz, of Golden Willow Elk Ranch, sells at is St. Albert Farmers' Market.

“I used to do central Alberta before the oil and gas died. It was amazing. But now this is the only market I do. There’s such a diverse population here. Very few people know much about elk, but they’re interested and want to try,” said Gwozvz.

He carries sausage, steak, ribs, organs, roast, smokies, jerky, and assorted other products. To prove his point about diversity, a young woman with a dog allergic to most canine foods stopped to purchase elk bones.

“It’s about one of the few things he can eat,” she said.

One product that mesmerized two tween boys was the Viking Wood Splitter, a demonstration located at the far end of St. Anne Street. The wood splitter was actually a four-foot sword modelled after Viking iron that splits wood precisely with one stroke.

Gavin Stone, 12, a Grade 6 student at Ronald Harvey described the demonstration as “very cool and satisfying to watch the wood being chopped by a Viking sword of doom.”

“And it works better than an old axe,” Stone piped in.

Over at Whiteout Workshop, owner Natasha Paterson, an eight-year vendor, sells ethically-sourced T-shirts and tank tops. She creates the designs and hand pulls each shirt on a colour press.

“Opening day was awesome. At this market everybody supports everybody, both the vendors and customers. I’m really happy it’s back on."

The market is open every Saturday from 10 a.m. to 3 p.m. Due to downtown road construction, parking is at a premium. Free park and ride runs from St. Albert Centre every 20 minutes. Two market-negotiated parking sites are available directly adjacent to the bus stop and across the street beside Arby’s.