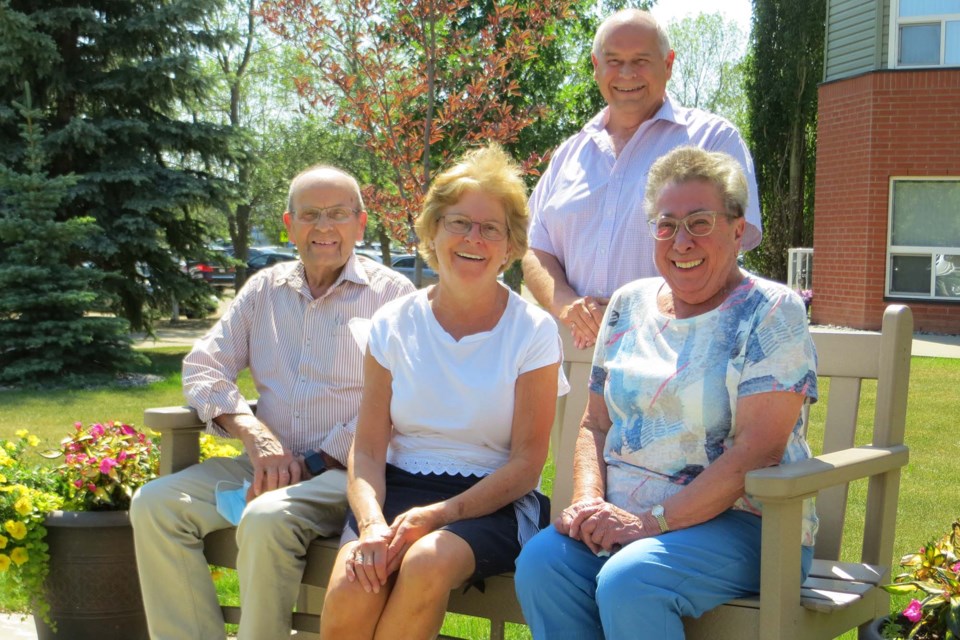 Meet Marilyn Davidse, Bill Napier, his son Brian, and his daughter-in law Margaret. They were residents of Citadel Mews West, a seniors' residence destroyed by an unpredictable fire on May 6.

The quartet was safely evacuated and have since moved to Citadel Mews East, a residence in the same complex that will provide them with the comfort, safety, and security they need to move past their trauma.

But the group is dealing with mixed emotions as they attempt to pick up the pieces of their shattered lives. How do you rebuild, not only physically but psychologically, after a fire tears through your home, your sanctuary, your memories?

“What is missing is everything from life before May 6. It’s all disappeared,” said Brian.

“Every day you remember something different you won’t see again,” Margaret added.

Davidse said, “What we have now is stuff. If you don’t have things to retain an anchor from the past, the past essentially disappears.”

All 17 residents that returned to Citadel Mews East are in transition. In a sense, they are mourning lost objects that embodied priceless memories. But they are also attempting to move forward relying on internal strength and resilience developed from a lifetime of experience and perspective.

On the night of the fire, these four had retired to their fourth-floor suites. The alarm rang and they quickly filed out following procedures from previous practice drills.

“We were so comfortable. When you get to be 90, you like comfort. But when a fire alarm goes off and you know it’s real, you get a lot of energy,” chuckles Bill at the memory of everyone’s quick exit.

No one had time to pack. Citadel’s disaster preparedness and exit strategy focused primarily on clearing everyone out safely. One crucial element was missing.

“We had multiple practice alarms. We exited the same way we practiced. But we didn’t take anything with us. Now we have go-bags in our suite. We put a list of things we need in a go-bag. In an emergency you collect it and put everything in – a computer, your medication, glasses, documents, phone, phone charger, anything valuable,” Brian said

Once outside, Davidse called her daughter for pickup while the Napiers were shuttled to St. Albert Inn where they stayed for three days.

At St. Albert Inn, the restaurant was closed to the public. However, by the morning after the fire, staff served a full breakfast and three meals a day, no questions asked.

“They were fantastic,” Margaret said.

Pharmacies refilled medications quickly, many hair stylists refused payment, and “anybody who left without glasses was provided with free glasses,” said Davidse.

One man even contacted Bill offering him a house in which to live. The donor’s daughter was out of town and willing to temporarily lend him the property.

“Imagine that. A house,” said Bill. Although he appreciated the generous offer, he declined.

But it wasn’t only individuals and small businesses that pitched in. Many local stores opened their doors and offered tables loaded with clothing, toiletries, sheets, and towels free for the taking.

The region’s giving spirit brought out many emotions that helped temper the frustrations. The biggest one, of course, was the inability to access personal belongings from the suites.

For five days Brian and Margaret didn't have access to their Lexus parked in the underground parking. In the rush to exit the building, the car keys were left in the residence, and retrieving them was not an option.

“We had to get a special parkade tow truck to tow it out. The Lexus has two different motor systems and they had to reprogram both systems,” Brian said.

Margaret added, “It took almost one month to get the keys cut because of the complexity.”

Bill, the oldest of the quartet, has lived through two fires, a flood, and a pandemic. Taking things in stride, he said, “As bad as something gets, there is always something worse.”

Not all seniors are dealing with the fire’s displacement in the same way.

For Davidse, “It (Citadel East) is a brand-new place. It’s got no meaning. Eventually, I’m going to make it work. I can’t call it home yet, but it is getting a little better. I take it one day at a time.”