Repurposed glass crafts are hotter than ever 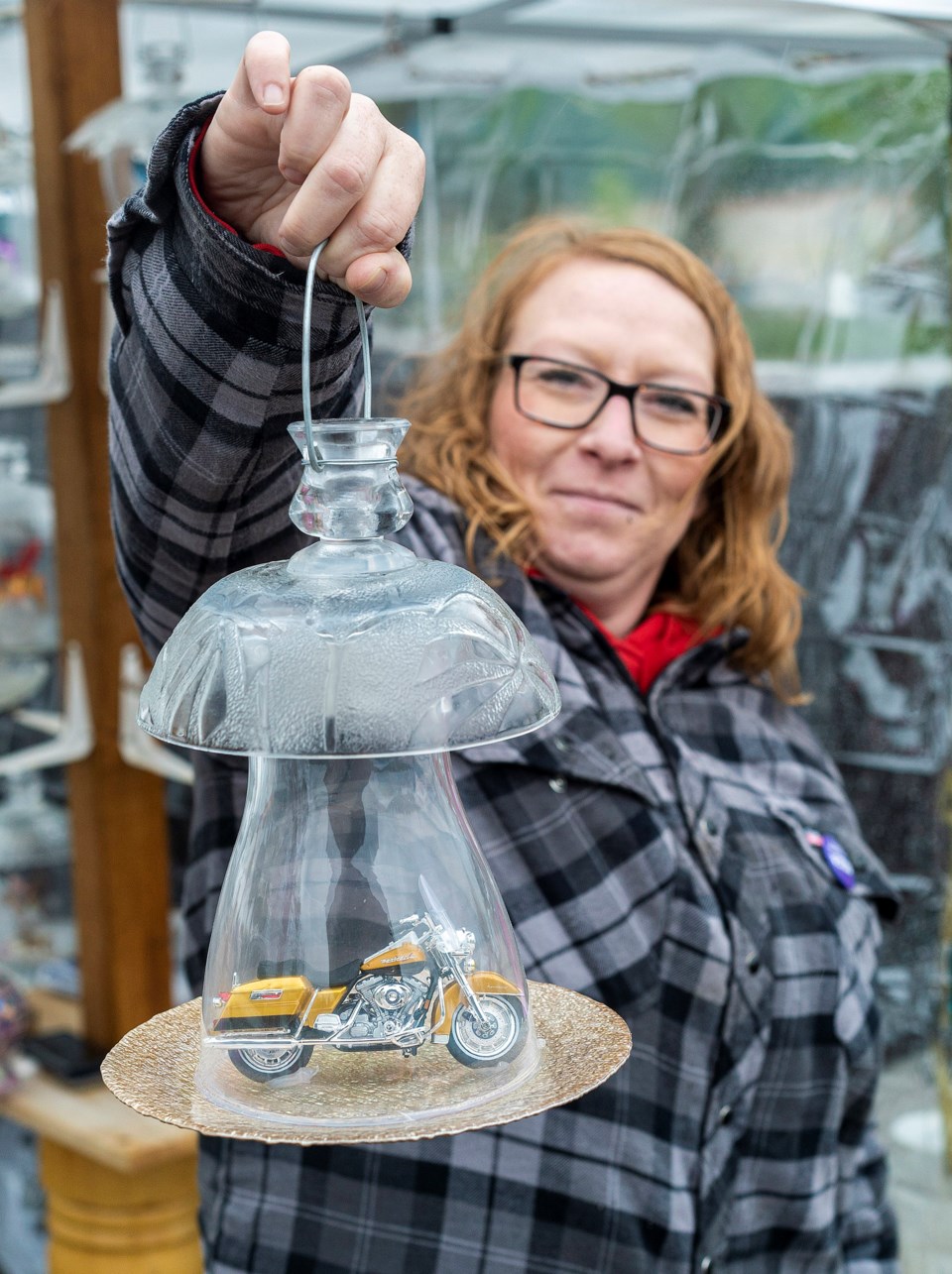 In his Taber shop adjacent to horse country, Patrick MacCoy lightly glues a delicate figurine inside a round, see-through glass vase. As a finishing touch, he adds a small illuminated solar light.

MacCoy, a first-time vendor at the St. Albert Farmers’ Market under the business moniker The Outhouse Mouse, has a passion for repurposing cast-off glass wares – decorative plates, glasses, goblets, decanters, jars, balls, candy dishes, vases, ashtrays and bottles. You name it. He refashions it.

“I take things nobody wants and I revitalize them, and afterwards it seems to have a new meaning for them,” said MacCoy, who constructs one-of-a-kind solar garden lamps, ornamental glass flowers and birdbaths.

And judging by the nearly sold-out booth last Saturday at the market, the glass crafts are brisk sellers with purchases from every age demographic.

“I like the different colours. And they would look really, really pretty with plants,” she said.

MacCoy wasn’t always a farmers’ market vendor. Born and raised in Ontario, he gravitated to Winnipeg where one of his brothers lived.

“I went to Winnipeg and looked for a job as a custodian. But that year, there was hiring freeze on custodians. So I went to get my fifth class engineering ticket. I did so well, my instructor recommended I apply at Concordia Hospital as a shift engineer. They were looking for a summer replacement, and it turned into 30-some years on the job.”

His job was to maintain the hospital power plant. That included keeping boilers hot in winter and air conditioning running in summer. If MacCoy worked the night shift, he was responsible for emergency calls, keeping the fire system on track and making sure the oxygen output operated full tilt.

“In exchange for that, if you have a heart attack which I did, the nurses look after you really well,” he chuckled.

While raising a family in Winnipeg, MacCoy belonged to a club where everyone owned a customized van. The group titled themselves the Keystone Coaches and MacCoy’s van was named The Outhouse Mouse.The letter 'e' in mouse was a cute painted rodent.

His foray into art started as a hobby doing bodywork and knocking off custom paint jobs.

“A neighbour showed me how to do it, and after that I went crazy doing it for everyone.”

After retiring from the hospital to care for a grandson, MacCoy relocated to Edmonton. Needing extra income, he shifted his attention to repurposing glass items, in large part because there was so much unwanted, low-cost stock at thrift stores, church bazaars and non-profits.

“I’d met an elderly gentleman in Ontario who was making something similar. I asked if he minded if I made something like it. He showed me a few tricks and I expanded it. I started making birthday gifts for family and friends and then I went to markets.”

Now in his fourth year as a vendor at regional markets, MacCoy’s customers pay him to repurpose vintage collectibles, Christmas ornaments, and even the odd flamingo. Perhaps the strangest request was to incorporate the ashes of a deceased individual into a commemorative accessory.

“I get a lot of joy from doing this. People come back and thank us. It lightens up their life.”