Ribfest set to fire up grills for new drive-thru approach 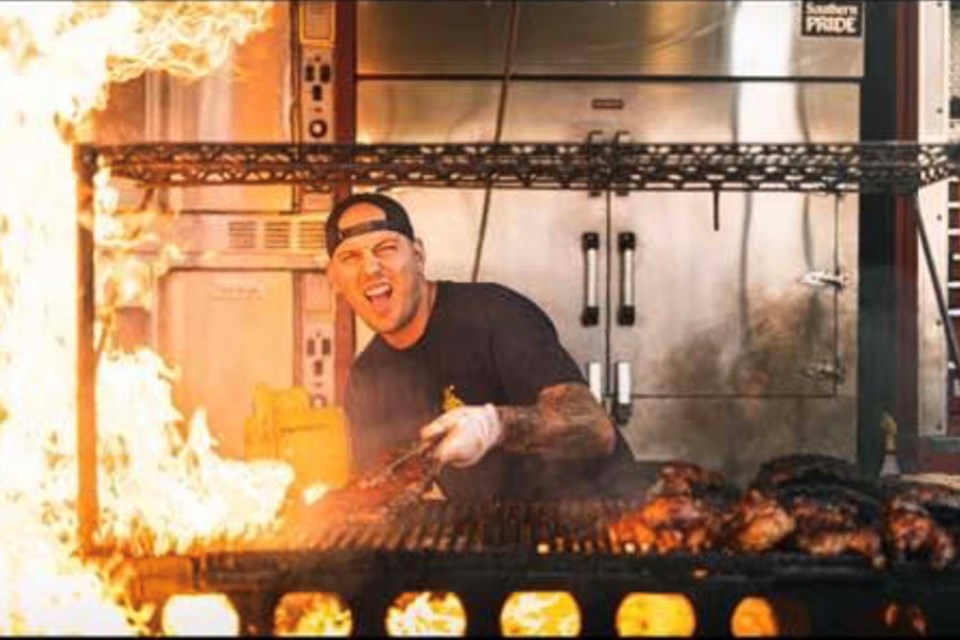 Andrew Reinhardt, a professional ribber, shows off his flaming barbecue performance. His team of eight ribbers will be one of three groups unleashing their mad skills at the Rotary Club's 2nd annual Ribfest June 11 to 13. SUPPLIED/Photo

If everything goes according to plan, St. Albert should see its second annual Ribfest today.

That’s the message from Adrian Michelutti, lead organizer for the Rotary Club of St. Albert, who said pandemic-related shutdowns have made planning for the event a challenge.

“With COVID restrictions and limited gatherings allowed, it was difficult. It was down to the wire if our application would be accepted. It was literally last week we received approval. Putting together the infrastructure in such a tight timeline is difficult, but we’re very excited to have it,” Michelutti said.

The goal of a traditional Ribfest is an outdoor event that mirrors an old-time family picnic, where sweaty ribbers wearing sauce-stained shirts dish out platters of smoked barbecued meats.

It may not look the same as years past, but health restrictions have not prevented Rotary from cooking up a summer feast.

Ditching the traditional crowd-packed event at Lion’s Park, Andrew Reinhardt, a pit boss who worked in 2019 to organize the city’s first Ribfest, came up with a back-up plan for a drive-thru Ribfest.

“It’s like going to McDonalds. You’re given a paper menu. You drive up in a queue and order from an iPad. You send the order to the team and someone will bring your food back to you. We’ve seen a lot of success with it and we’re super excited to partner up with Rotary again,” said Reinhardt.

Since ribbers barbecue on three-metre grills, cooking numerous orders at once, Michelutti said orders likely to be processed within about a minute.

While cooking for several thousands, and to keep things fun, the rib teams compete head-to-head in a cook-off for bragging rights. Hoping to snag the championship, ribbers concoct their own secret sauces and rubs.

The pit masters are on a 14-week Ribfest tour criss-crossing Alberta. It kicks off in St. Albert and finishes in Fort McMurray on the Labour Day weekend.

“Fort McMurray is the biggest show in Alberta – even bigger than Calgary. There’s a heavy male population up there, and honestly, there’s not that much to do,” Reinhardt said.

In addition to serving pork and beef racks, their 15-metre self-contained trailer is a mobile grocery store with ingredients to grill chicken, pulled pork, sausage and varying side dishes.

Prices range from $3 cornbread to a $145 special feast that could feed a family or two.

Reinhardt said that although a Ribfest is a fun time, a great deal of work happens behind the scenes to follow pandemic guidelines. They built new rigs to operate more efficiently and made changes to the operation of equipment and other upgrades.

“Our staff are temperature checked every day and we wear disposable masks. Last year we did 10 events and there was not a single case of COVID in either the team or our customers. I’m very proud of that.”

Ribfest is a Rotary fundraiser and the three teams will share a portion of their profits. In addition, the service club is selling 50/50 tickets as well as raffle tickets. Prizes for the raffle include a Traeger smoker and meat packages.

“It’s a great community event, especially now that people have been cooped up for so long," Michelutti said. "It’s a pretty visual spectacle. It brings people out, and it brings people together.”

Ribfest runs today to Sunday from 11 a.m. to 8 p.m. in the St. Albert Centre parking lot, along the perimeter of St. Albert Trail and Bellerose Drive.