To boost morale, the couple built 24 “COVID lamps” and gave them as gifts to shut-ins as a reminder that people care and light has a way of piercing the darkness.
Jun 19, 2020 11:00 AM By: Anna Borowiecki 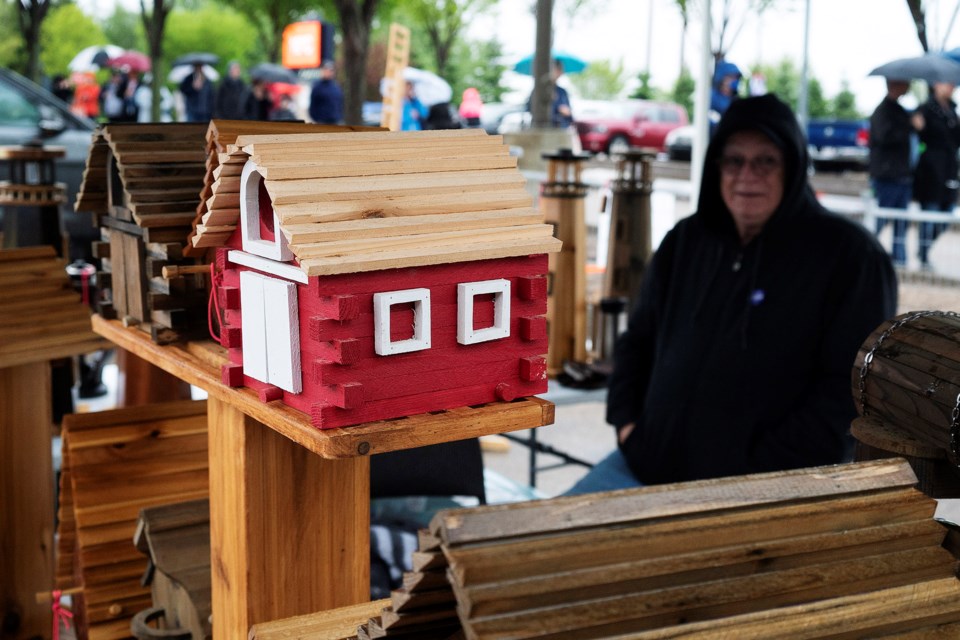 Murray Nason of Ryley Woodcrafts was one of the sellers on the opening day of the 2020 St. Albert Farmers' Market on June 6. CHRIS COLBOURNE/St. Albert Gazette

Murray Nason’s all-cedar garden décor glows with a personality that instantly reminds you of a bygone era, the nostalgic whimsy of childhood.

Flying under the banner of Ryley Woodcrafts, the cedar-crafted accessories are a smart blend of early 20th-century craftsmanship and 21st-century technology.

One of last Saturday’s shoppers, Debbie from Sherwood Park, was instantly smitten and purchased a two-metre high windmill.

“I like stuff I don’t see anywhere else, stuff that’s hand-made. And it’s going to look beautiful in my yard,” she said echoing the sentiments of several other passersby.

“Murray is a true craftsman,” said Mary Anne. “He came from a family of craftsmen and I think that makes a difference in what he does.”

The hardworking couple retired in their 50s and spent 15 years traveling before devoting time to family in the United States. But by 2017, they’d returned to Alberta and bought of a condo in Edmonton.

“We discovered condo life is not for us,” Mary Anne said.

Murray added, “When you work six days a week and all of sudden you have nothing to do, it’s the scariest thing that ever happened to me. This (cedar décor) creates a demand and keeps you busy.”

Scouting for a new home, they discovered a bank repossession in the Village of Ryley that just happened to have a shop in the back.

“Now I have two lots to mow,” chuckled Murray.

Murray, who learned to wield a hammer and saw at the age of 10, and followed in his father’s and grandfather’s footsteps as a builder, easily transformed his carpentry skills to an artisanal format.

The artist uses red western cedar. To create more character in each piece, he looks for boards that feature the wood’s natural properties.

Initially the duo made gifts for family and friends. In a community of 500 where everyone looks out for each other, the pandemic’s early winter arrival had significant impact on lonely, shut-in seniors.

To boost morale, the couple built 24 “COVID lamps” and gave them as gifts to shut-ins as a reminder that people care and light has a way of piercing the darkness.

Completing his thoughts, Mary Anne added,” And they were so happy to receive them. We got a lot of business out of it, but it wasn’t what we were after.”

Close to the interview’s end, Murray showed off his point of pride: two Cape Cod garden chairs with a comfy slanted seat and a fan-shaped back. Stained and varnished in both dark and light wood, the chairs are his grandfather’s original design.

To some, the chairs are simply a lovely garden accessory. To the Nasons, it’s a symbol of their core values and a legacy they happily share with passersby.