Consumer demand for local produce is blossoming, and St. Albert Farmers’ Market vegetable vendors are seeing an uptick in demand.
Aug 15, 2020 10:00 AM By: Anna Borowiecki 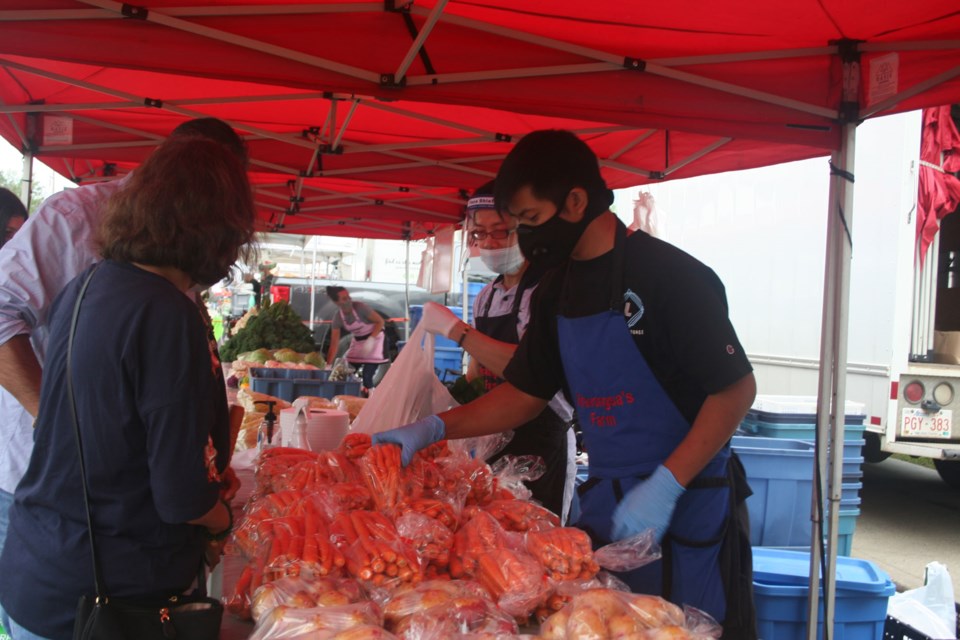 Small Alberta farmers have always struggled to get their vegetables into hands of consumers while coping with a short growing season and competition from outside the province.

Due to global turmoil stemming from the COVID-19 pandemic, vegetable farmers are taking an extra hit. Strict border regulations prevent temporary foreign workers from entering Canada to assist with crop production. On the flip side, national border restrictions have also pushed Albertans into realizing the extent of our reliance on imported foods and its cost.

Consumer demand for local produce is blossoming, and St. Albert Farmers’ Market vegetable vendors are seeing an uptick in demand. For instance, at Viravongsa’s Farm, a non-stop lineup of shoppers of every age and ethnic persuasion are making it a priority.

The family farm is a 150-acre spread located in Red Deer County where a variety of 16 root vegetables, leafy greens, legumes and cruciferous veggies are grown.

“We don’t use chemicals or fertilizers. We like to eat these vegetables ourselves,” chuckled Steven Viravongsa, 27.

On any given year, only 60 acres of the dark nutrient-rich soil are seeded. Produce seeds are rotated annually to increase soil fertility and crop yield as well as limit the concentration of pests and diseases.

Steven is the driving force behind the family farm. The youngest of five children, he manages it while caring for aging parents suffering from medical issues.

His family immigrated from Laos in 1992. The small Asian country was sucked into the Vietnam War and a long civil war ended with a communist takeover in 1975. Re-education camps imprisoned thousands and attempts at creating collective farms were set up by an amoral leadership.

“There was corruption (and violence). The government was getting rich, but it was bad for the people,” said Steven. “This was a safer place. There was more freedom.”

The Viravongsa family received sponsorship to immigrate through a Christian church. Their first stop was Barrhead where the family of seven lived for several years before moving to Edmonton.

Initially Khamsy and Thongvanh, Steven’s father and mother, were employed at Sturgeon County’s Peas on Earth Organic Garden growing, picking and delivering vegetables. It was a learning experience on how to grow fresh produce in a sustainable environment and later sell it to markets in a time and cost-effective way.

Eager for independence, Khamsy and Thongvanh purchased 50 acres of land east of Edmonton. But it contained a large amount of gumbo, a sticky heavy clay soil.

“The vegetables wouldn’t grow too big and they had random shapes. They didn’t get enough nutrients to get the sweetness we wanted from them,” Steven said.

To keep their business afloat, the family purchased an 80-acre farm in Sturgeon County near Morinville. The black soil mixed with sand was ideal for growing produce.

However, just as Steven was graduating from Sturgeon Composite High School in 2013, his mother suffered a stroke and his father developed heart problems.

Steven opted to stay and care for his parents, and since two of the Viravongsa siblings were already living in Red Deer, the family farm operation was moved south.

As soon as the first snow melts, Steven plants hardy seeds whereas the more heat-loving cabbage, cauliflower, squash and zucchini are initially grown in a 25-foot long greenhouse. To maintain freshness, vegetables are picked, washed and bagged the day before market.

“I’ve experimented purchasing at different vegetable booths. Here the price is really good and the product is wonderful.”

“We want people to enjoy our vegetables. We want to make sure people get the taste quality and health benefits of vegetables. And we keep our prices low because when we go shopping, we don’t want to pay high prices.”