A day of dance to remember

For a refreshing change of pace, you could walk down to the Ukrainian Youth Unity Centre on Sunday for the inaugural YEG Ballroom Dance Festival. If you really wanted to show your style then you could waltz, foxtrot, jive, swing, tango, rumba, samba or cha cha there instead.
Oct 19, 2019 10:30 AM By: Scott Hayes 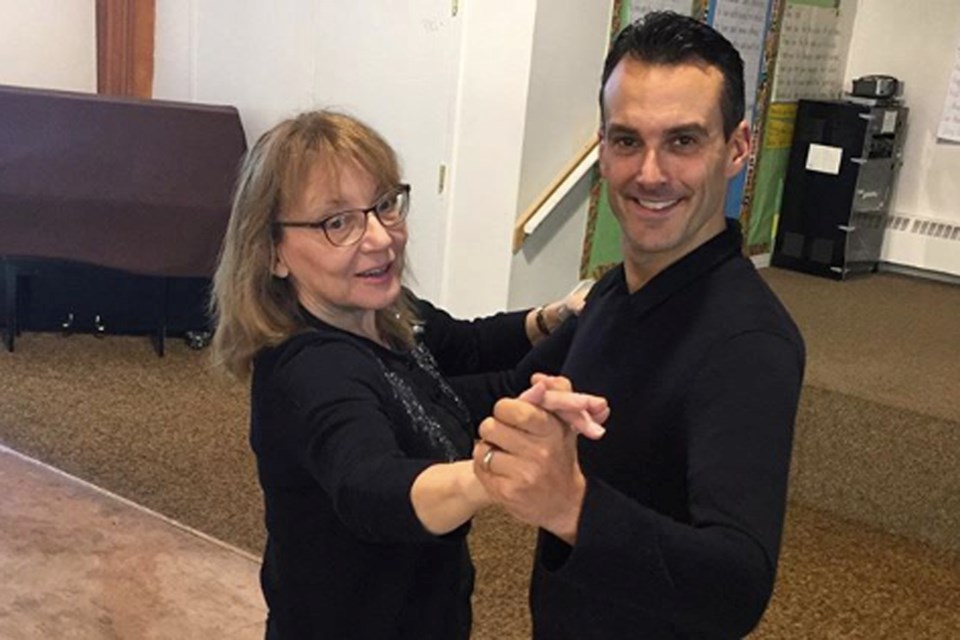 For a refreshing change of pace, you could walk down to the Ukrainian Youth Unity Centre on Sunday for the inaugural YEG Ballroom Dance Festival. If you really wanted to show your style then you could waltz, foxtrot, jive, swing, tango, rumba, samba or cha cha there instead.

The newly-formed one-day event is just one of the signs that ballroom dance is making a swinging comeback. Just ask organizer Theresia Williams, who has a dare for the skeptics out there.

“I think the whole hook is to try it once,” she proffered, suggesting the key to having a good ballroom dance experience is in who you're dancing with.

Williams tried it once.

“My husband and I ... we had a little bit of free time so we thought we'd take up ballroom dance. We did not ever, ever expect it to become such a central part of our lives,” she continued. “Here's how serious we have become about ballroom dance. We have an unfinished basement, my husband and I, and we're looking at and thinking that we don't have any room to practice. ‘Where are we going to practice?’ So we put down a hardwood floor in the basement and it's the practice studio.”

The Sunday festival promises to offer enough ballroom dance for the general public to dip their toes in with a basic box step, or dive head on into the deep end of the simmering samba. Expect to be tempted by drop-in lessons in a variety of dance styles by some great local teachers. They’re all fantastic, Williams averred, and taking an intro lesson is the best way to see what you think.

There will also be a marketplace of local dance studios and suppliers will be ready for those who feel the beat and want to keep it going after the festival is done.

If that wasn’t enough, there will also be a fair bit of stargazing as well. Organizers have lined up a list of recognizable faces and names for the celebrity Yes, We Can Dance performance. Look for figure skaters Jamie Sale and Ben Ferreira, as well as CBC’S Carol Amadeo, Royal Alberta Museum director Chris Robinson, and Tim Yakimec, the executive director of the Edmonton Opera, to all strut their stuff.

“We've got a bunch of biggies in there. People have been so incredibly excited and enthusiastic about it. Everybody's excited.”

Williams says all she wants is for people to give it a try. There are a lot of health benefits to being active, but ballroom dance is really more about the social benefits.

“It's the connection with other people that come. It's not so easy to do these days and ballroom dance brings you into a community of people who enjoy being with each other, enjoy dance, enjoy conversation, and meeting other people. It's a very warm, welcoming community. That's been a real bonus that we weren't expecting in ballroom dance, too.”

Topping it all off is the news that the dance music will be provided by the Trocadero Orchestra.

“The whole kick – really that's the ultimate ulterior motive we have – is we just want you to try ballroom dance because we're pretty convinced you’ll fall in love with it. You'll get the beat of the dance; you get a couple of steps. Go try them out. That's the hook. Try it out and see what you think.”

The festival is just one step outside of the box for Edmonton’s thriving Les Amies Dance Club, which is astoundingly now in its 98th season of activities.

The Ukrainian Youth Unity Centre is located at 9615 153 Ave. in Edmonton. The YEG Ballroom Dance Festival takes place from 11 a.m. to 5 p.m. on Sunday, October 20. Parking and attendance is free. Visit yegballroomdance.ca for more details.